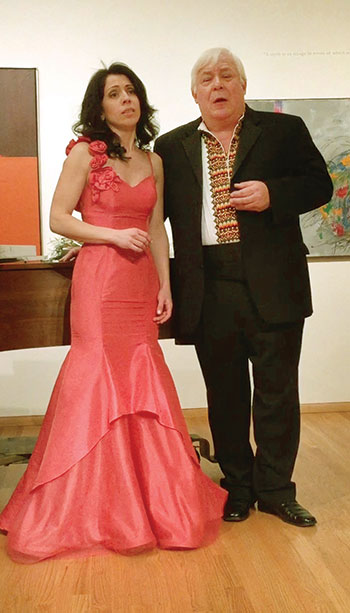 CHICAGO – Credit the Ukrainian Institute of Modern Art in Chicago for bringing the highest quality programming to audiences. The institute’s art galleries were filled to capacity at the notable performance in the afternoon of February 21, by an audience that was mesmerized by the performance of international opera star Stefan Szkafarowsky and Lviv-born Marta Zaliznyak-Derzhko.

Piano accompaniment was provided by Jeffrey Panko. The versatility and style of all three artists came together in a program that featured opera standards, Ukrainian songs and rarely heard compositions.

Mr. Szkafarowsky is an internationally acclaimed bass with a career that includes the Metropolitan Opera in New York and leading operatic venues throughout the world. He is beloved by Chicago audiences for his performances at the Lyric Opera of Chicago and for his devotion to his Ukrainian roots and family.

Ms. Zaliznyak-Derzhko, a young star of the Lviv National Opera Theater, recently immigrated to the United States and has a bright future ahead. Her evocative, lyrical and highly trained soprano voice endeared her to the audience.

The singers performed as soloists and also in duets. Mr. Szkafarowsky’s renditions flowed with human emotions, contrasting tragedy, comedy, love and anger with the artistic agility of a singer and actor who transformed himself and the audience along with him.

Ms. Zaliznyak-Derzhko provided magical moments in roles of happiness or loneliness with the poignant ability of an artist in command of her talent and the instrument of her voice.

The program consisted of some of Ukrainian music’s and opera’s “greatest hits,” as well as compositions and arrangements that were new to the audience. Mr. Szkafarowsky chose compositions by Kosenko, Fomenko, Kytasty, Lysenko and Sonevytsky. The rendition of “Reve ta Stohne” to the words of Taras Shevchenko as composed by Mykola Lysenko was heard for the first time by most in the audience, and it was a welcome surprise. 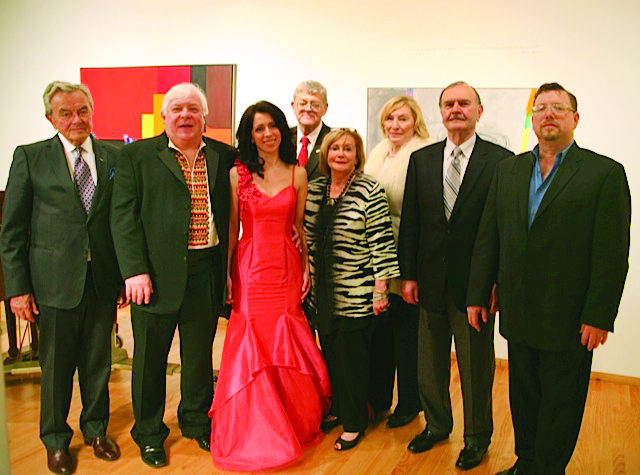 “David’s Psalm,” “Duma” and “Pid Tvoyu Mylist” by Ihor Sonevytsky were rarely heard pieces that attracted the attention and awe of music lovers who admired the evocative harmony and innovative expressive sonic effects. Mr. Szkafarowsky’s rendition of “Old Man River” by Jerome Kern and Oscar Hammerstein featured the singer’s reach of the lowest tones and the softness of the lyrical melody; it reminded everyone of the inevitable passage of time when he enunciated with melancholy “Ol’ man river, dat ol’ man river… He jes’ keeps rollin’… He keeps on rollin’ along.”

Ms. Zaliznyak-Derzhko chose Ukrainian classics from the operas “Zaporozhets za Dunayem” and “Natalka Poltavka” by Hulak-Artemovsky and Lysenko, and then performed well-known songs by Kos-Anatolsky, Bilash and Bezkorovaynyj with lyrical expression and her highly trained and soothing voice.

Mr. Szkafarowsky’s rendition of “Dva Kolory,” (music by Bilash, lyrics by Pavlychko) was rendered with richness, confidence and lyricism. He also delivered the aria of Taras from Lysenko’s “Taras Bulba,” and performed contrasting moods with Banco’s aria from Verdi’s “Macbeth,” and Basilio’s aria from Rossini’s “Barber of Seville.”

The singers’ performances were filled with passionate outbursts and dramatic eloquence, and held the audience in suspense, not knowing what musical gem to expect next.

The concert ended with the lyrical and dramatic tones of the duet, “Koly Rozluchayutsia Dvoye” by Lysenko, after which both singers left the stage with emotional intensity to a rousing applause and a long standing ovation from the audience.