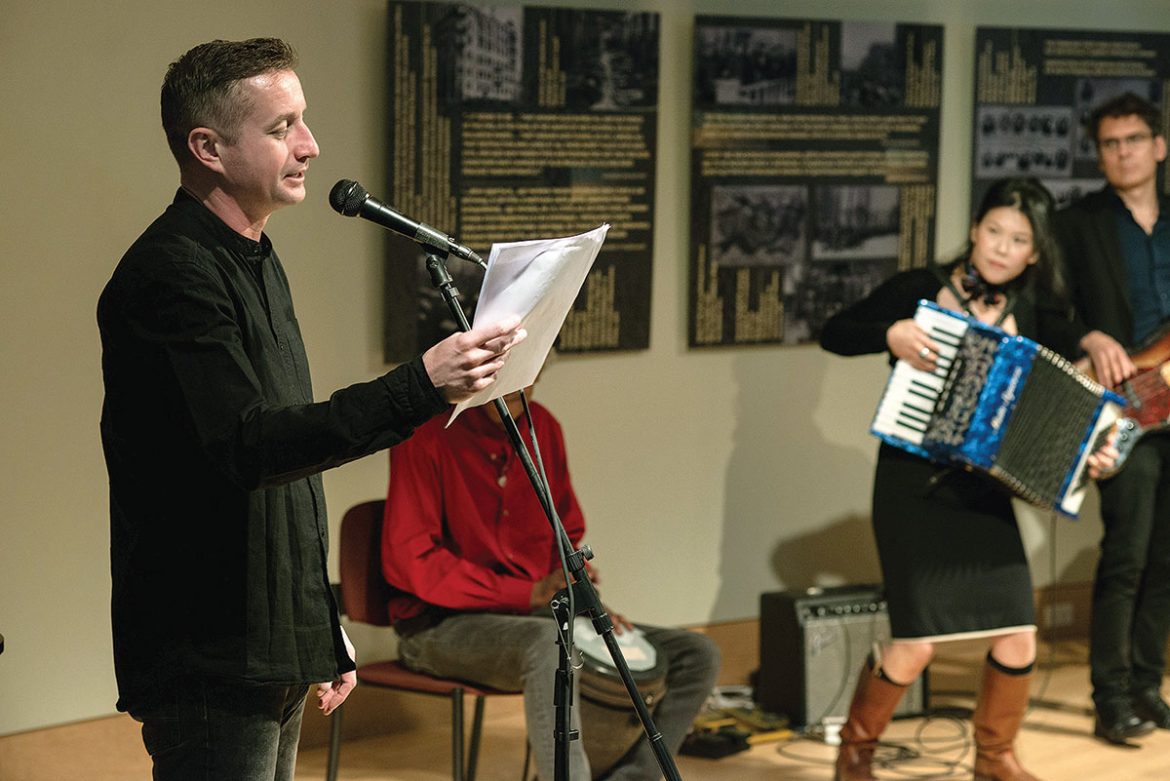 Serhiy Zhadan reads “Mushrooms of Donbas,” which Susan Hwang and Charlie Nieland turned into a song.

NEW YORK – Yara Arts Group has been working with Serhiy Zhadan, the author of 12 books of poetry, throughout his career. Most recently, Yara brought Zhadan to the U.S. for a series of events to celebrate the publication of “What We Live For, What We Die For” (Yale 2019) in English translation by Wanda Phipps and Virlana Tkacz.

On Friday, April 12, the Bushwick Book Club united with Yara at The Ukrainian Museum in New York City. This wasn’t translator’s Wanda Phipps’s first experience with the Bushwick Book Club, having participated as a musician once herself. She says, “It was a daunting challenge that wound up being a lot of fun. I love discovering the music in literature.” Other events included a reading at Harvard University and “Zhadan and Jazz” with jazz pianists Anthony Coleman and Fima Chupakin at The Ukrainian Museum.

How does it work? The club members all read the same book and let its pages inspire them to create song. They usually perform in venues in Brooklyn. This time the club included Andi Rae Healy, Rachelle Garniez, Jessie Kilguss, Andrea Longato, Erel Pilo, Ray Brown, John S. Hall, SKYES and Marlon Cherry.

Ms. Hwang has worked previously with Virlana Tkacz and Yara Arts Group. Yara is responsible for over 30 innovative theater pieces. It often combines world music in its pieces and offers the opportunity to infuse language with poetry in its scripts. This is what Yara did with “Captain John Smith,” in which Ms. Hwang participated.

The Bushwick Book Club gathered around the work of one of Ukraine’s most prominent poets, who is himself also a musician with a band called the Dogs. He read his poems in Ukrainian while the musicians responded to his performance. Though I had many favorites, several surprised me: “What do Whales Dream at Night”, for its quirky lyrics in response to “Headphones” by Mr. Zhadan in which he writes, “You can choose to never turn off this music/ Listen to the cosmos, shut your eyes./Think about whales in the ocean at night.”

Another was the ethereal voice of Ms. Pilo singing “Where Are You Coming From?” Her voice seemed to represent the distance present in the line, “We once lived in a city that no longer exists.” She stated, “For me, the process of writing a song was about trying to create something beautiful out of something so tragic. The poems themselves were powerful and hard-hitting and really sad. So I didn’t want to add to that sadness, but bring in something that could soothe the listener.”

Mr. Brown’s song “Sunflower” was a mix of all the poetry in the book and dared to repeat the word sunflower in Ukrainian, “soniashnyk,” endearing the audience with the way he made the poems his own.

The finale was “Mushrooms of Donbas” performed by Ms. Hwang, Mr. Nieland, Mr. Cherry and Ms. Garniez. The poem about the gritty and hypnotic nature of mushrooms brought an unforgettable energy to the song.

Mr. Zhadan sat in the front row, watching as his poems were turned into music. The musicians got the chance to engage with the writer. Everyone left with a greater understanding of Mr. Zhadan’s work and the opportunity for him to sign their copies of his book.