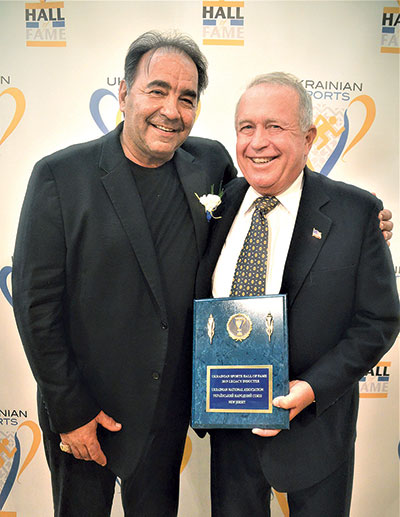 NHL Hockey Great Wayne Babych, a keynote speaker at the Ukrainian Sports Hall of Fame banquet, with Ukrainian National Association Second Vice-President Eugene Serba, who accepted the plaque given to the UNA as an inductee in the Legacy category.

HORSHAM, Pa. – Whether it was a first-generation soccer player, a second-generation volleyball star or a third-generation hockey player, all of the honored athletes inducted into the Ukrainian Sports Hall of Fame professed their profound pride in being Ukrainian.

The program kicked off with rhyming greetings in both Ukrainian and English by Ihor Stelmach, The Ukrainian Weekly’s sports correspondent, who introduced the evening’s master of ceremonies, Teo Bodnar, vice president of the board of directors and the Ukrainian Sports Museum’s head curator.

Ukrainian Sports Museum/Hall of Fame President Myron Bytz greeted all with news of a 5,000-square-foot planned expansion of the Horsham facility as the organization continues its growth and accumulation of Ukrainian sports memorabilia. Mr. Bytz received a very generous donation from the Chicago-headquartered Selfreliance Federal Credit Union to assist in the non-profit organization’s expansion project.

The president of the local Ukrainian Nationals Soccer Club, Dan Nysch, spoke of his organization’s successes on and off the pitch, impressing the crowd with Tryzub’s generous charity donations in the greater Philadelphia area.

Class of 2019 Hall of Fame inductee Wayne Babych, 54-goal scorer with the National Hockey League’s St. Louis Blues, was one of two keynote speakers during the evening. Mr. Babych shared many amusing anecdotes about the countless battles fought in Philadelphia when playing the “Broadstreet Bullies” versions of the Flyers hockey team. A respected goal scorer, he was always matched up against an opposing tough-guy checker who would leave the Ukrainian sniper battered and bruised.

Mr. Babych mentioned how his brother, Dave, would always have Ukrainian food (pyrohy and kovbasa) on his teams’ chartered flights for all on board to enjoy.

While playing in Pittsburgh, Wayne Babych’s personal fan club established a “Babych Patch” section of the Penguins’ arena, some of whom stalked him at his favorite watering holes. Among insults he heard on the ice: he was called “Baby Itch” and “Babych Cabbage.” 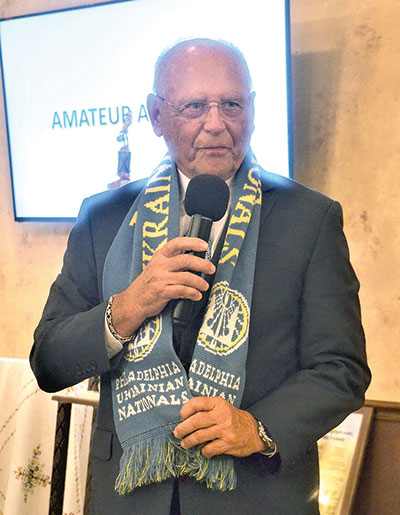 Dr. Joe Machnik, soccer player, coach, referee, instructor and broadcaster, whose impact on the sport of soccer is nearly unrivaled, was the evening’s second featured speaker. Dr. Machnik, whose grandparents were Polish, reflected on his ties with Ukrainian football – how he was tricked into being a goalie at a young age, only to become a member of the 1965 U.S. Open Cup champion New York Ukrainians who performed in the old German-American Soccer League. He later played semi-pro with Newark Ukrainian Sitch in the American Soccer League in 1967-1968, when the club temporarily changed the spelling of his surname to Machnyk to make it look as though he was Ukrainian. A hockey fan, he was convinced by a classmate to become a soccer goalie as a high school sophomore.

During his Sitch tenure Dr. Machnik said he met Ukrainian soccer immortal Walter Chyzowych, and the two were close friends until the former U.S. National coach’s death in 1994. That friendship, he said, helped open doors for Dr. Machnik, resulting in his being known as American soccer’s renaissance man. Dr. Machnik was inducted into the Ukrainian Sports Hall of Fame in 2018 as a member of the New York Ukrainians team. 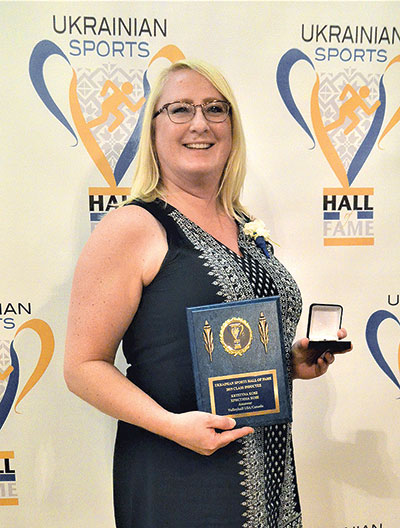 Among those present in person for their Hall of Fame inductions were Joseph Milinichik, a third-round pick of the NFL’s Detroit Lions in 1986, who blocked for Hall of Famer Barry Sanders; Monica Dobosh, the first woman powerlifter to be awarded Powerlifter of the Year by the Ambridge VFW Barbell Club in 1990; and Krystyna Kosz, inducted as an amateur athlete in volleyball, becoming the youngest ever member of the Ukrainian Sports Hall of Fame at age 49.  Ms. Kosz played volleyball at St. Peter’s and Rutgers universities, as well as for Sitch.

The two women honorees received very heartening applause following their words of thanks when Ms. Dobosh referenced her proud deceased Ukrainian parents smiling down on her achievement, and Ms. Kosz urged the audience to continue instilling Ukrainian pride in future generations.

Among the several Ukrainian organizations inducted into the new Legacy category of the Ukrainian Sports Hall of Fame was the Ukrainian National Association, which was recognized for its longtime sponsorships of sports tournaments and competitions, going back to its “Youth and Sports” program initiated back in 1937.

The UNA’s second vice-president, Eugene Serba, accepted the award on behalf of the fraternal organization. Also in attendance was UNA Auditor Luba Walchuk.

Mr. Serba thanked the Ukrainian Sports Hall of Fame for honoring the UNA and noted that the organization has supported a number of sports in its history, among them baseball, basketball, bowling and soccer. Today, the UNA sponsors golf, tennis, swimming and volleyball tournaments. It has supported numerous sports clubs and helps sponsor Ukrainian Heritage Day at the New Jersey Devils.