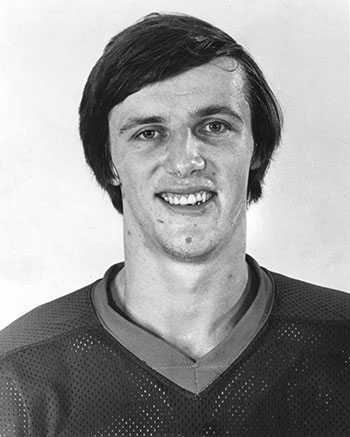 Mike Bossy was named one of the NHL’s 100 – the top-100 players in the history of the National Hockey League’s 100 years of existence. This is the third in a series featuring the six Ukrainian hockey stars selected to this elite group.

When hockey pundits discuss late-20th century dynasties, the team that first comes to mind is the Edmonton Oilers. Ranking right up there with Gretzky’s Oilers are the New York Islanders of the 1980s, often referred to as one of the greatest teams of all-time. One of the main men on the Isles’ top line was Ukrainian right wing Mike Bossy, partnered with center Bryan Trottier and left wing Clark Gillies. The line was feared by opposing forwards, defensemen and goaltenders for nearly a decade, and was a primary reason for the success enjoyed on Long Island.

The Islanders were fortunate to find Bossy still available at No. 15 in the 1977 NHL Entry Draft. In later years, many organizations questioned themselves and their scouting staffs for overlooking a pure goal-scoring machine who averaged 77 goals per season during a four-year junior career. In those days, the Quebec Major Junior Hockey League had a reputation for graduating smallish forwards who could score goals, but weren’t well versed in physical or defensive play. The prevailing scouting decision was too much risk on investing a high first-round pick on a potential bust result.

There were no such doubts at the Islanders, who were pleasantly surprised to grab Bossy at 15. It didn’t take long for him to prove his worth to his new club. Many hockey pundits consider him to be the best pure sniper in NHL history. Not content in being a great goal scorer, Bossy proceeded to work diligently at becoming a totally rounded hockey player. The no-defense junior leaguer became a valuable two-way stud in the pros.

Difficulties adjusting in the pro ranks? How about scoring a then-rookie record, an unbelievable 53 goals while winning Calder trophy top rookie honors? Word was he promised general manager Bill Torrey he would score 50 goals in his rookie season – a first in league history.

His rookie season’s production was simply a prequel to his career. Bossy would score 50 goals in every season he played except for his final year when he was hampered by chronic back problems. He amazingly tallied 50 goals in 50 games during the 1981 campaign – the second time in NHL history a player accomplished this momentous achievement. (Hall of Famer Maurice Richard netted 50 in 50 in 1945.)

The Ukrainian’s phenomenal career totaled 573 goals and 553 assists for 1,126 points in only 752 regular season games. Post-season action saw him score 85 goals and 75 assists for 160 points in only 129 games. He tallied 60 goals five times, 100-plus points seven times. He won four Stanley Cups, scoring the series-winning goals in the 1982 and 1983 Stanley Cup finals and becoming the only player in league history to net winning goals in consecutive years.

Bossy won the Conn Smythe Trophy (playoffs MVP) and the Lady Bing Trophy (most gentlemanly player) three different times. He made the league’s first All-Star team five times and second All-Star team three other years. He was elected into the Hall of Fame in 1991.

In international play he was a member of Team Canada in the 1981 and 1984 Canada Cup tournaments. His overtime goal in the 1984 sudden-death semifinal eliminated the Soviet Union and sent Canada to the final and its eventual second Canada Cup championship.

Bossy took a stand about violence in hockey during and after his pro career. He found himself a target of opposing team’s grinders and tough guys in an effort to limit his scoring prowess, a common strategy against highly skilled stars. Bossy took it, but never gave it back, never lowering himself to dirty play. His minimal 210 career penalty minutes was highlighted by winning the three Lady Bing Trophies. Some experts labeled him a weakling, and he was regularly panned for not defending himself when challenged. Instead he would make his overly aggressive opponent pay on the ensuing power play with still another goal.

The New York Islanders’ No. 1 line of Trottier, Gillies and Bossy put the “power” into power play. The Ukrainian right-winger was a powerful force with the man advantage, registering an astounding 181 of his 573 career goals on the power play.

Bossy’s Hall of Fame career was dramatically shortened by a chronic back injury that had developed over time due to the never-ending pounding/cross-checking he received from the over-aggressive opposition. His last season saw him score a mere 38 goals – the only year he failed to notch 50.

Later in a self-assessment of his phenomenal, yet short, career, Bossy referred to his 38-goal year as his biggest letdown. Truth be told, he possibly had no business even playing that final year due to his bad back. Being the “true” hockey player he was, however, a chronically bad back would not deter him from playing the game he loved.

Not tough enough, eh? Hah! This was the ultimate hockey warrior, true superstar, one of the top pure goal scorers of all time, playing with ultimate pain. Pundits be damned. Bossy, in his own inimitable way, proved what a tough competitor he truly was in his final season.

No doubt Bossy retired from pro hockey way too early. This super-sniping goal producer dedicated himself to rounding out his game in the defensive end, making himself even a more valuable asset to the Islanders dynasty. Oh, and this goal scorer could set up his linemates with a quick look and a deft pass. Yes, the ultimate team player, to boot.

BOSSY BITES: At 6’0, 185 pounds, Bossy’s preternatural ability to score was based on a lightning-quick release and a knack for always being in the right place at the right time. Teammate/defenseman Denis Potvin claimed Bossy was always the player the Islanders looked to set up for a shot. He dabbled with television work in studio at MSG Network. He retired at age 30. The Hockey News rated him fifth-best right-winger all time, behind guys named Howe, Richard, Lafleur and Jagr. He was the only NHL player to record four game-winning goals in one series (1983 Conference final). Born in Montreal, he played juniors in Laval, Quebec. The Islanders retired his No. 22 in March 1992.