Johnny “Chief” Bucyk awaits a pass in front of the net against the Toronto Maple Leafs, during the early days of his career.

Johnny Bucyk was named one of the NHL’s 100, the top-100 players in the history of the National Hockey League’s 100 years of existence. This is the fifth in a series featuring the six Ukrainian hockey stars selected to this elite group.

June 10, 1957. Newspaper headlines told of President Dwight D. Eisenhower’s recovery from a heart attack. The top movie was “Gunfight at the OK Corral.” Houses in the Boston suburbs listed for $15,900. Johnny “Chief” Bucyk became a Bruin.

The 1956-1957 season ended in disappointment, but promisingly for both the Boston Bruins and Detroit Red Wings. Detroit finished first in the league, but lost to the B’s in the first round of the playoffs. The Bruins finished third out of six, but advanced to the Cup finals before losing to Montreal in five games.

The Red Wings had won four Stanley Cups in the early 1950s and in the 1957 off-season were looking to return to their glory years. Three of those Cups were won with the great Sawchuk tending the net, but the Ukrainian had been traded to Boston shortly after the 1955 parade. The Bruins were looking to trade Sawchuk, who managed just a 40-43-19 record in his 102 Boston games. Nervous exhaustion had caused Sawchuk to leave the team in mid-January of 1957.

The Bucyk-Sawchuk trade of Ukrainians was considered at the time to favor Detroit. After all, Sawchuk was a three-time Stanley Cup champion, five-time All-Star and three-time Vezina Trophy winner. Bucyk had finished only his second NHL year with statistics of 11-19-30 points in 104 matches.

Looking back at the trade today, the Bruins definitely won the deal.

In Boston, Bucyk was reunited with Bronco Horvath and Vic Stasiuk, his old junior hockey teammates with the Edmonton Flyers, to form the famous “Uke Line,” as all three players were of Ukrainian descent. At the time of the trade he was promised a regular shift by coach Milt Schmidt, something he hadn’t gotten in his time with Detroit. Bucyk’s humble goal of a regular shift turned into an assault on the team’s record books and a legacy as one of the top players in NHL history.

Honors and records for all-around player

His 21-year Bruins career provided a mega-list of honors – 16 seasons of 20-plus goals, two Lady Bing Trophies as the league’s most gentlemanly player, two All-Star team berths and seven All-Star Game appearances. He was, at the time, the fifth player in league history to record 100 points in a season (Phil Esposito, Bobby Orr, Bobby Hull and Gordie Howe were the first four) and the fifth ever to score 50 goals in one campaign (after Maurice Richard, Bernie Geoffrion, Esposito and Hull). In 1970-1971 he tallied 50 goals at the age of 35 years, 10 months.

Bucyk retired at the end of the 1977-1978 season as the club’s all-time leader in every category and still holds the team mark for goals (545), while sharing the record for most seasons played with Ray Bourque at 21. He ranks second in games, assists and points. Bucyk ranked right up there with Bobby Hull and Frank Mahovlich as top left wingers in his time.

Johnny’s all-around abilities made him a unique player: a great scorer, a super playmaker, who was perfect on the power play, had solid puck control and was a strong body checker. Strong on his skates, he was very difficult to knock down. 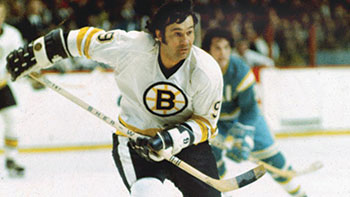 Johnny Bucyk chases the puck down the ice during the later years of his career.

Bucyk was a gifted goal scorer from short to medium range. His patented goal-scoring move was standing off to the right of the goalie just outside the crease and either putting it under the crossbar or scoring off a pass. He was superb on converting rebounds from five to 15 feet in front of the net.

The ultimate team player, Bucyk’s top memories are winning the Stanley Cup in 1969-1970 and 1971-1972. Top personal accomplishments include hitting 50 goals, scoring his 500th career goal in Boston, being inducted into the Hall of Fame and having his number retired at the Boston Garden.

His number 9 was retired on March 13, 1980, while his career numbers earned him election into the Hall in 1981, his first year of eligibility. He was a truly special player, but his work off the ice made him as a special person. Team GM Harry Sinden was determined to keep the “Chief” in the organization following the conclusion of his playing career.

Bucyk has been labeled as the ultimate loyal and dedicated Bruin. As a player he organized team events and helped teammates in difficult situations, showing leadership while exuding admiration and respect.

His legacy also involved his charitable involvements, especially being the driving force behind the Boston Bruins Alumni Association. Johnny set up the Alumni team, which traveled all over raising money for various causes. He was the state chairman for the American Heart Association for 20-plus years, doing hospital visits and seeing ill children.

Bucyk’s alumni teams have raised well over $1 million for Boston-area charities. He skated in over a dozen games per year nearly 30 years after playing his final NHL game. The Bruins Alumni Association formally recognized his legacy in that area by establishing the “John Bucyk Award” in 1999 to annually honor the current player who has contributed the most to charitable and community causes.

His personal career milestones were many – All-Star teams, Lady Bing trophies, team and league records. But ever the team player, his favorite memory is one he shares with legions of fans: “Bobby Orr flying through the air in 1970 to score the game-winning goal in the old Boston Garden and then accepting the Cup,” he says. “That was definitely the most exciting time.”