At the age of 16, Mykola Shaparenko became the second youngest scorer in Ukrainian Premier League history when he scored a goal for Illichivets Mariupol as a substitute. Shortly thereafter, he was signed by Dynamo Kyiv and made his first team debut for Dynamo against Zirka Kropyv­nytskyi in November 2015. The hope was that the youngster could become a superior player for Dynamo. 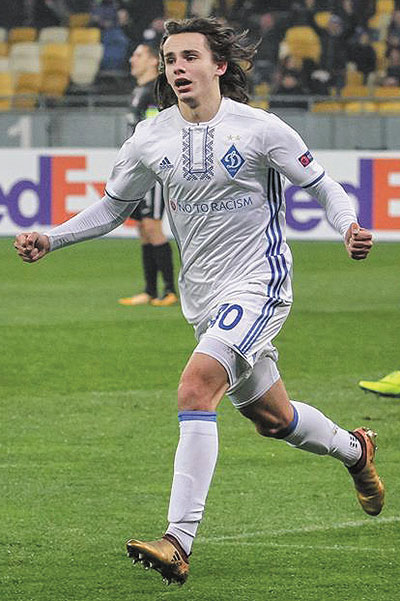 The epic Dynamo club has a long history of producing and developing soccer stars, with names like Oleh Blokhin, Vladimir Muntyan, Oleksandr Shovkovskiy and Andriy Shevchenko among their famous alumni.

Volodymyr Veremeyev, Igor Belanov, Leonid Buryak, Serhiy Rebrov, Oleh Husyev and Andriy Yarmolenko are some more key players who contributed mightily to the club’s winning ways over time, while enjoying some of their best personal football success during their years playing in Kyiv.

Expectations are that Dynamo Kyiv will continue to produce and develop Ukraine’s next soccer stars based on the club’s storied past. Dynamo proudly boasts three Ballon d’Or winners associated with the club, two of whom were products of the Dynamo youth system. Unfortunately, since Shevchenko’s retirement in 2012, Ukraine has been searching for their next great soccer star.

The homegrown Yarmolenko was a hope, along with Dnipro-developed Yevhen Konoplyanka – both slated as possibly the next “great one” – but both players have struggled in their adjustment to life outside of Ukraine, resulting in their careers developing not quite as expected.

Shakhtar Donetsk’s continued dominance in the Ukrainian Premier League has forced Dynamo to look in different directions in an attempt to overcome its player development challenges. One such direction is going with youth, which is an intrinsic part of soccer. Shaparenko found himself playing an ever-expanding role with Dynamo after his youth level success. He made his breakthrough during the 2017-2018 season, when he was tried as a potential running mate with forward Viktor Tsygankov. He proved to be the missing ingredient.

In his eight first-team appearances that year, Shaparenko hinted at his future potential with one goal and two assists in Ukrainian Premier League action. A fractured collarbone toward the end of the campaign curtailed his progress, forcing him to miss several months. When he returned, Shaparenko continued to play a featured role, helping in an end-of-season win over rival Shakhtar.

Shaparenko went on to cement his role with Dynamo in the 2018-2019 season, as he maintained his progress and development. In 22 matches in all competitions, despite being slowed by an injury at the start, the midfielder hit the pitch running and never stopped. He scored five goals while playing an important role in Dynamo’s offensive strategy. Shaparenko is responsible in establishing the link between the midfield and attack. The importance and reliance of Shaparenko alongside Dynamo’s other diamond, Tsygankov, became elevated because of the club’s struggles to finish games, often failing on defense.

Watching the 20-year-old perform on the pitch, one recognizes his talent to create, thinking a play through before it unfolds, displaying an intelligent soccer IQ. Dynamo Kyiv, an organization adored by many fans, finds itself in a period of stagnation and uncertainty, searching for a diamond to take it out of the rough.

With its glory days behind, Dynamo must resign itself to its prized prospect departing in order to take his career to the next level. Shaparenko is represented by Pro Star, an agency that primarily handles Eastern European clients. He could easily follow fellow Ukrainian players Yarmolen­ko, Ruslan Malinovskyi and Valeriy Luchkevych onto the greener pastures of Central and Western Europe.

In order to fulfill his potential, Dynamo’s next diamond may follow the path of those before him. Unless the faltering football club immediately surrounds him with more talent, Shaparenko may be leaving Kyiv to better his career.

Shaparenko is a substitute on Ukraine’s national team and has played in four international matches.

Another new face to make a name for himself and follow in Shevchenko’s footsteps is Viktor Kovalenko. This young player plies his trade with Ukrainian Premier League powerhouse Shakhtar Donetsk. The rising star was born in Kherson, a big city home to a major shipbuilding industry, which allowed him a start with one of Ukraine’s bigger football outfits. Kovalenko is a product of Shakhtar’s youth system, and his rapid personal development can be attributed to this organization’s first-class training facilities and coaching. His rise was indeed quite rapid, having been identified as a young talent several years ago. 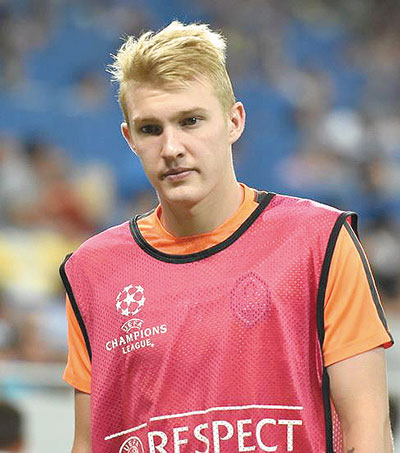 In 2011, he was featured on the Under-16 side, earning 11 caps. He scored 11 goals in 20 matches for the U-17 side, playing central and attacking midfield positions. After starring for the youth national team, he received attention from the higher levels of Ukraine’s national team. In 2015, he scored four goals and three assists in nine games in the UEFA Youth League, leading Shakhtar to the finals. After excelling against the best of his age, it was clear he was an elite prospect. He proceeded to top himself in the FIFA U-20 World Cup that same year, introducing himself to the world by winning the golden boot, scoring five goals in the tournament, including a spectacular hat trick against the United States. The scoring central midfielder was ready for a first team role with Shakhtar in 2016.

Kovalenko has been primarily featured in the central attacking midfield position, where he has certainly contributed to Shakhtar’s fortunes. In 118 appearances he has tallied 19 goals, stepping right in and filling the void created by the departure of Alex Teixeira.

Kovalenko’s playing style fits well with current soccer trends. He personifies a do-it-all central midfielder who can shoot, pass and play in a deeper position. He tends to be more of an attacker and has been compared to Cesc Fabregas, while personally emulating Toni Kroos. These comparisons arise because of the knack all three have for scoring goals from midfield. This became profoundly evident way back in a UEFA Youth League match versus Anderlecht when Kovalenko notched three goals.

His first was a long run through the entire defense, and he was easily able to finish like a striker, capably demonstrating strong instincts and timing from midfield. His second showed off his finishing touch and eye for goal again, as he finished an eight-yard volley that deflected off a defender. Once again, this was the classic scenario of a central midfielder showing the skills of a striker.

Kovalenko is a substitute on Ukraine’s national team and has played in 22 international matches.