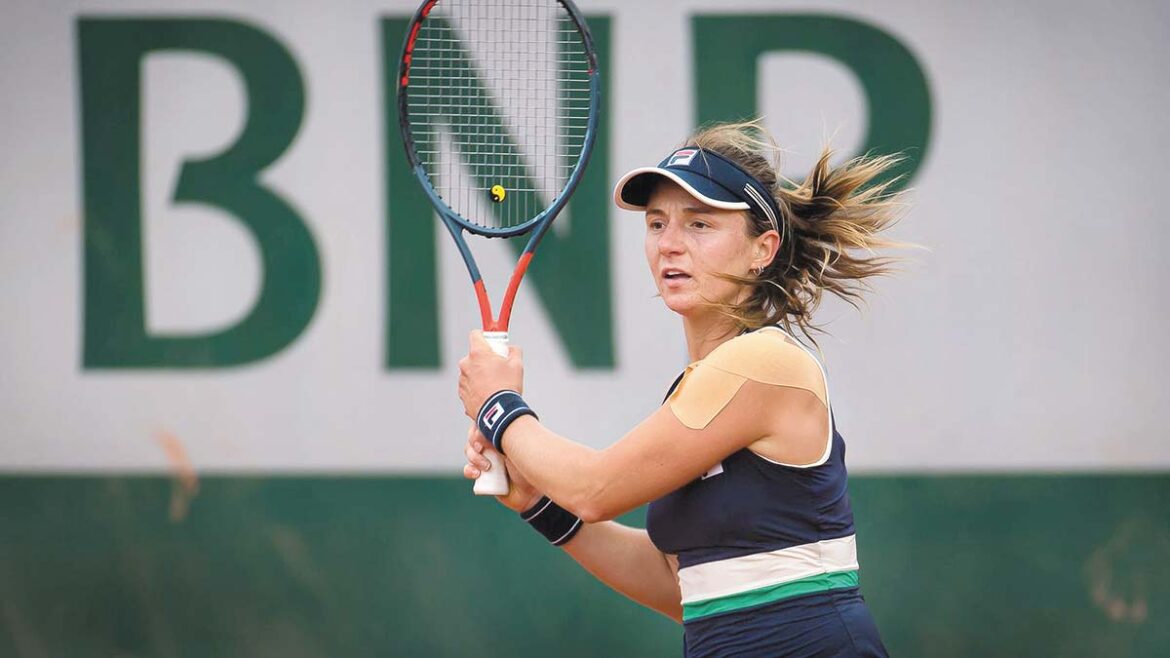 Nadia Podoroska stuns with her performance at the 2020 Roland Garros (French Open).

Ukrainian Nadia Podoroska made history at the French Open on October 6 by becoming the first-ever qualifier to reach the women’s singles semifinals at Roland Garros. Ranked No. 131 in the world, the native Argentine (Ukrainian on her mother Irene’s side) had never beaten a top-50 player coming into this tournament, only to stun fellow Ukrainian Elina Svitolina in straight sets, 6-2, 6-4. Podoroska also became the first female qualifier in 21 years to reach the final four of any Grand Slam.

The 23-year-old showed impressive efficiency and nerves of steel throughout the quarterfinal match, joyfully celebrating her upset victory by tossing her racket into the air.

“It’s very difficult for me to speak after the match, but thanks everyone for your support. I’m very, very happy!” said Podoroska, per the WTA. “I try to play every kind of shot. We did a good job with my coaches during quarantine. I’ve been training a lot with all of my team and I think that’s why I’m here today.”

Despite never winning a main draw match at a grand slam before this tournament, Podoroska seemed unfazed by her opponent’s experience. Svitolina had been the only WTA title winner remaining in the top half of the French Open draw. She had reached the semifinals of both Wimbledon and the U.S. Open last year.

Svitolina showed glimpses of her ability throughout the encounter, but never fully gained control of the match. The initial set lasted only 37 minutes, prior to the second one becoming a more even affair. It was Podoroska coming out on top, squandering two match points before sealing a most memorable victory.

Podoroska’s run to the Roland Garros semifinals matched Alexandra Stevenson of the U.S.A. (1999 Wimbledon semifinal) and Christine Dorey of Australia (1978 Austra­lian Open semifinal) as the best run by a qualifier at a Grand Slam in the Open Era.

The road to the semifinals

Before her match-up with Svitolina in what could have been deemed an all-Ukrainian duel, Podoroska had to survive her qualifying bracket. This involved beating three other qualifiers, which she did somewhat easily, all in straight sets.

She next had to go through four rounds of opponents prior to engaging with Svitolina in the quarterfinals. First was her victory over Greet Minnen, 6-2, 6-1. Round two saw her bounce Yulia Putintseva (23rd seed), 6-3, 1-6, 6-2. The third round had her matched up versus Anna Karolina Schmiedlova, who would go down by scores of 6-3, 6-2. Barbora Krejcikova became the fourth-round victim, 2-6, 6-2, 6-3. These wins set the stage for her ultimate triumph over the third-seeded Svitolina.

Serving at 5-4 down, Svitolina saved two match points, the second with an audacious slice at the net to end a 27-shot rally. On the third match point, Podoroska hit a crisp forehand winner before chucking her racket toward the blue sky. Svitolina hit a mere eight winners – the same number of times she lost serve – as she slumped to her worst defeat in a major in terms of her opponent’s ranking.

Svitolina broke her serve in the first game, but then Podoroska turned on her engine, bagging five consecutive games to move up 5-1. Having converted all of her four break points while Svitolina converted only two of six, Podoroska found herself up one set after 37 minutes.

Perfectly mixing power and a gentle touch with drop shots, Podoroska proved too skillful for Svitolina, who did not resemble the player who reached the semis at two majors a year ago. Six games in a row went against serve in the second set until Podoroska held for 5-4 before wrapping it up on Svitolina’s serve on her second match point with a forehand winner.

A semifinal loss to Swiatek

After playing and winning eight matches in 15 days, Nadia Podoroska expended vast amounts of physical and mental energy, her streak far exceeding all realistic expectations she and her training staff may have had entering this French Open. Her disappointing dismantling at the hands of Polish teenager Iga Swiatek, 2-6, 1-6, could easily be explained as fatigue, aches and pains from her strenuous long run in the tourney, severe nervousness from being on one of tennis’ ultimate center stages, a superior opponent or a combination of all the above.

Podoroska had no answer for Swiatek’s powerful groundstrokes and sleek movement. Swiatek broke serve five times while finishing off the one-sided contest on Court Philippe Chatrier in 69 minutes. She looked to impose herself on the match early and jumped out to a 3-0 lead. Swiatek managed to hit through the court well, both off the forehand and backhand, painting the clay with winning shots, amassing 23 during another typical performance at a tournament in which she also snapped top seed Simona Halep’s 17-match winning run.

Unable to put up much resistance, Podoroska decided to show more aggression and started coming forward to cut down the time for Swiatek to hit her big shots. This strategy helped her hold two service games, but was not enough to derail Swiatek, who faced just a lone breakpoint in the opening set. Podoroska, who earned more than she had in her entire career by reaching these semifinals, would have hoped for the tide to turn in the second set, but there was no respite. Swiatek raced to a 4-0 lead before a few nervous errors allowed Podoroska to avoid a second-set bagel (zero points) with break of serve. Swiatek immediately broke back, however, and ended the ordeal on the first match point with an unreturned serve.