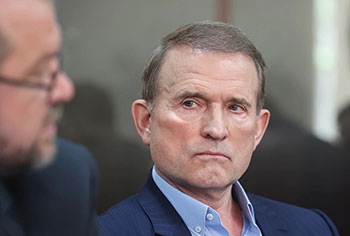 Viktor Medvedchuk appeared in a Kyiv court on May 13.

The Ukrainian Prosecutor-General’s Office has asked a Kyiv court to set bail at more than 300 million hryvnyas ($10.8 million) for Kremlin-friendly tycoon and politician Viktor Medvedchuk, who along with another pro-Russian lawmaker is under suspicion of treason.

The office made the request on May 13, hours before a session of the Pechera district court, where the judge is expected to decide on any pretrial restrictions for Mr. Medvedchuk.

Mr. Medvedchuk, who has a close personal relationship with Russian President Vladimir Putin, was officially notified earlier this week of a treason investigation including him after the Security Service of Ukraine (SBU) searched his home and office in Kyiv.

Mr. Medvedchuk and his pro-Russian Opposition Platform – For Life party have both made statements rejecting the charge and calling it politically motivated.

In February, Ukraine’s National Security Council announced sanctions against Mr. Medvedchuk, his wife, Oksana Marchenko, and several other individuals and entities.
The sanctions froze the couple’s assets for three years and prevented them from doing business in the country.

Mr. Medvedchuk is the head of the political council of Opposition Platform – For Life, which is the largest opposition group in parliament. He is one of the party’s 44 deputies in the 450-seat legislature.

His relationship with Mr. Putin runs so deep that the Russian leader is godfather to Mr. Medvedchuk’s daughter.

Mr. Medvedchuk was hit with sanctions by the United States in 2014 for undermining democracy in Ukraine.

The sanctions were tied to an investigation into exports of coal to Russia from a separatist-held region in eastern Ukraine.

Fighting between Ukrainian government forces and the Kremlin-backed separatists who control parts of Ukraine’s Donetsk and Luhansk regions has killed more than 13,000 people since April 2014.
Russia occupied Crimea in March 2014 and instigated separatist clashes in Ukraine’s east after anti-government protests toppled the Russian-friendly former president, Viktor Yanukovych, in February 2014. (With reporting by Ukrayinska pravda and UNIAN)