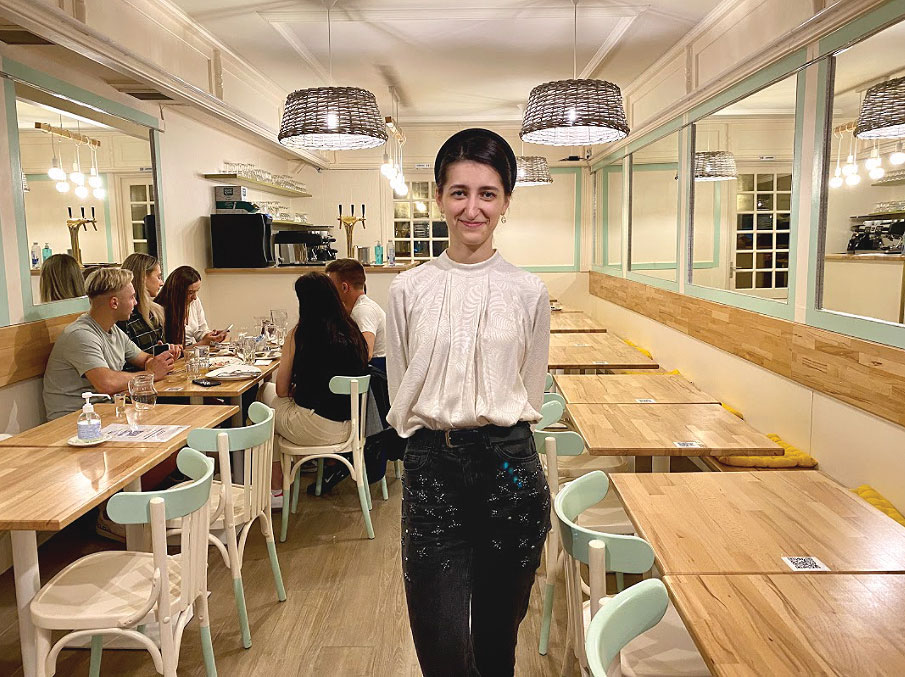 Alina Wolf in her restaurant Oranta in Paris.

PARIS – Devoid of the usual fanfare that accompanies the opening of a new business, Alina Wolf simply opened the door of her restaurant Oranta on July 1 and welcomed wandering visitors to try traditional Ukrainian borshch, varenyky and potato pancakes in the heart of the city.

For the moment, the restaurant has no outdoor signage, making it hard to find, even though it’s located just blocks from the Louvre Museum.

Once inside, however, The Weekly’s correspondent immediately knew he was in the right place – guests and staff spoke Ukrainian with each other, modern Ukrainian music entertained diners and the menu described exclusively Ukrainian cuisine.

Ms. Wolf, who owns the restaurant, was born in Ivano-Frankivsk but moved with her family to Paris when she was 10. She said she never lost her connection to the Ukrainian community and culture.

“When I moved to France, and I said at school that I was from Ukraine, I was asked where it was. I had to explain that it is between Russia and Poland,” Ms. Wolf said, adding that similar experiences pushed her to promote Ukrainian culture in any way she could.

In fact, many Ukrainians who live in France said they decided that, after the Revolution of Dignity, they felt compelled to share their culture.

“At least explain that our culture is something other than Russian,” Ms. Wolf said.
Most French people knew very little about Ukraine, so Ms. Wolf’s family and the Ukrainian community began organizing the Pysanka Festival to promote Ukrainian culture.

Exhibitions, Easter egg painting, Ukrainian cuisine, film screenings, music concerts, dances and traditional Ukrainian food were all part of the festival, which has taken place in recent years a week before Easter. The festival has been held in the castle where Anna Yaroslavna (also known as Anne of Kyiv) once lived.

As festival visitors enjoyed varenyky, they often asked Ms. Wolf if they could find them elsewhere in Paris. Realizing that there were no other locations where Parisians could find the traditional Ukrainian dumplings, Ms. Wolf decided to open Oranta.

“It took me a long time to open a restaurant because I had no experience in entrepreneurship. I went to training to learn how to make a business plan. Over time, I developed it and moved to a new challenge – finding an appropriate location in Paris.

Sometimes you see a good spot, but you go into the kitchen and it’s a nightmare. For me, it is also important to think about cooks and their working conditions,” Ms. Wolf said.

In looking for a place for her restaurant, Ms. Wolf looked at a spot on a colorful street in Paris, which led her to develop ​​colorful varenyky. While the location didn’t work, it did spur the idea to make a menu that now includes five types of varenyky, with new ones planned for the future.

Nearly a month after the restaurant’s soft opening, Ms. Wolf said she plans to adapt the menu to each season. As the restaurant buys all of its products from local farmers, it will change the menu based on the seasonal availability of different vegetables and fruits. Ms. Wolf said she is working to soon include on the Oranta menu Hutsul banosh, a colorful dish made with grits and sour cream and served with cracklings, fried mushrooms and onions.

“We will gradually add new things to the menu,” Ms. Wolf said. “Since I have never worked in a restaurant, it is difficult for me to add many different dishes at once. We expand the menu gradually, improving the available dishes. To be honest, the first week we had was hectic – we barely managed to prepare orders in time.”

Immediately after the soft opening, Ms. Wolf created Facebook and Instagram pages for the restaurant. Her friends and members of the Ukrainian community here posted about the restaurant on social media and left feedback after their first visits. Reviews have all been five stars, largely because they came from Ms. Wolf’s loyal fans.

The Weekly’s correspondent learned about the restaurant after Archbishop Gudziak posted about it on his Facebook page.

“The newest restaurant [has opened] in Paris,” he wrote.

Ms. Wolf previously worked as a photographer in the communications department of the Eparchy of St. Volodymyr in Paris, where Archbishop Gudziak served from 2012 to 2019. Her mother heads a church choir, and Ms. Wolf’s connection to the church helped her pick the name Oranta.

“The name of the restaurant was chosen to protect those people who come here and us. My parents and I were in some way and are connected with the church, so we chose the symbol of Oranta. And it just sounds good as well,” Ms. Wolf said.

The icon of Our Lady of Oranta in the apse of Kyiv’s Saint Sophia Cathedral is one of the most significant and sacred masterpieces of Ukrainian culture. The mosaic is more than 1,000 years old.

Before the restaurant opening, Ms. Wolf spent time learning about Ukrainian restaurants in different countries. She says she was inspired by examples in Belgium and East Asia, and especially Veselka in New York. But she strives to live up to the standard set by the top Parisian restaurants, and she aspires to see a time when there will be long queues to get into Oranta.

“There was a restaurant called Ukraine in Paris, but the paradox is that it is a restaurant of Russian cuisine. This, of course, annoys all Ukrainians because in Ukraine very little has to do with Ukraine, as far as I know. A short time ago, they changed their name to Kalinka,” Ms. Wolf said.

Convinced that many French people are sentimental towards Russia, Ms. Wolf believes it explains why Russian restaurants are popular in Paris. But even if there is a demand for Russian cuisine, Ms. Wolf is less interested in making money. Her goal is to spread the word about Ukraine and promote Ukrainian culture through food.

While Oranta had a soft opening on July 1, Ms. Wolf said she plans to fully promote the restaurant’s opening after staff refine all of the different aspects of the business. In the meantime, Oranta has already became a must-visit stop in Paris for Ukrainian food. After all, just a 15-minute walk from the Louvre Museum can take visitors to a wonderful outpost of Ukrainian culture and cuisine.

Oranta is located at 1 rue de Marivaux, 75002 Paris, France; the nearest metro station is Richelieu-Drouot (lines 8 and 9). The restaurant is open daily from 11 a.m. to 11 p.m., and its website is https://oranta-ukrainian-restaurant.business.site/?utm_source=gmb&utm_medium=referral).