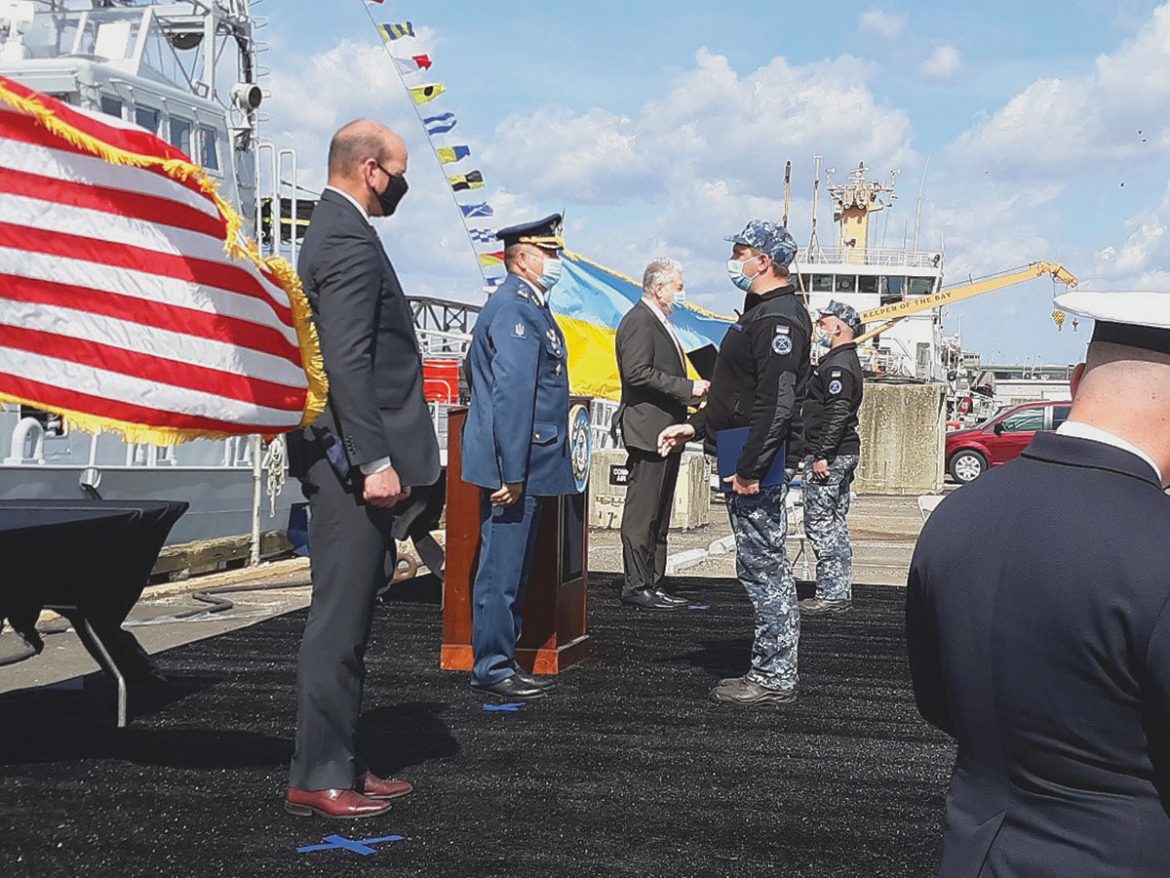 (From left to right) Hon. James Knight, deputy assistant commandant of the U.S. Coast Guard; defense attaché at the Ukrainian embassy in the United States, Maj. Gen. Boris Kremenetsky; and Ukraine’s Ambassador to the U.S., Volodymyr Yelchenko, congratulate sailors on their graduation from the U.S. Coast Guard’s intensive 10-week course.

BALTIMORE – The morning rains receded quickly and a blustery, sunny Friday unfolded just in time for the outdoor graduation ceremony of 32 Ukrainian officers and sailors at the U.S. Coast Guard shipyard, just south of Baltimore on March 26. The two crews of Ukrainian sailors manned the two refurbished coastal patrol cutters, which were donated to Ukraine by the U.S. Coast Guard through the Department of Defense’s Defense Security Cooperation Agency. Each patrol boat, the “Fastiv” and “Sumy,” will be manned by a crew of 16 – two officers and 14 enlisted sailors.

After opening speeches by the presiding officials, the Ukrainian sailors lined up to receive their certificates of graduation from the intensive 10-week course. Each of the sailors received congratulations, in turn, from Ukraine’s Ambassador to the U.S., Volodymyr Yelchenko; the defense attaché at the Ukrainian Embassy Maj. Gen. Boris Kremenetsky; and Hon. James Knight, deputy assistant commandant of the U.S. Coast Guard.
Mr. Yelchenko opened the ceremony by thanking the U.S. government for their continued strong support of Ukraine’s armed forces, noting that the two patrol boats “send a strong signal to Russia that Ukraine is not done.” He added that “…this was a great day for the naval and armed forces of Ukraine, as the cutters will become an important stabilizing factor in protecting Ukraine’s territorial integrity.”

Mr. Kremenetsky read a congratulatory note on behalf of the commander of Ukraine’s navy, Rear Adm. Oleksiy Neizhpapa, in which he emphasized that the support of the U.S., as a key strategic partner, was crucial in maintaining international security and defending Ukraine’s sovereignty.

In addressing the sailors, Mr. Neizhpapa said that he “counts on them to fulfill the great expectations” of Ukraine’s armed forces and the nation. “Ukraine needs professional warriors and defenders, commanders, leaders and technical experts” to defend the nation. Mr. Neizhpapa also thanked the Ukrainian community in Baltimore who “supported and watched over our sailors.”

Mr. Knight congratulated the graduates and remarked that these refurbished Coast Guard vessels will go a long way in helping to execute the missions that are similar to those of the U.S. Coast Guard. These include interdicting transnational organized crime syndicates involved in illegal smuggling, especially of narcotics and migrants. It includes protecting Ukraine’s maritime sovereignty by ensuring free passage of vessels on Ukraine’s coastal waterways and as first responders to maritime disasters and accidents.

Capt. Serhiy Fedorchuk, Naval attaché at the Ukrainian embassy in the U.S., noted that both cutters will be ready to be shipped to Ukraine after they are fitted with armaments sometime in the summer of 2021. A third cutter is still being refitted and will also be transferred to Ukraine – for a total of five coast guard cutters that have been donated by the U.S. Coast Guard to Ukraine. A new crew of 16 will be arriving in August to train on that cutter. The “Sumy” and “Fastiv” will join the “Slovyiansk” and “Starobilsk” – which were the two cutters previously donated – in Odesa.

The 32-member crew of the first two cutters, the “Slovyiansk” and “Starobilsk,” graduated on Sept 13, 2019, just one week after the release of 24 Ukrainian sailors from Lefortovo prison in Russia, 10 months after they were captured in Kerch by the Russian navy.

The costs of refurbishing the three vessels ran to $30 million. The costs were borne, as a grant to Ukraine, by the Department of Defense under the Foreign Military Financing program of the Defense Security Cooperation Agency. The previous two Coast Guard vessels “Slovyiansk” and “Starobilsk” cost $10 million to refurbish, which was paid for by Ukraine. All five cutters were authorized and funded during the administration of former U.S. President Donald Trump.

Seaman Oleksander Dorozhkin, 26-years-old, discussed the features of the U.S. Coast Guard Island-class cutters. Mr. Dorozhkin is from Zaporizhia Oblast and was individually cited for achieving top honors in this demanding course. Mr. Dorozhkin noted that the renamed “Sumy” is a class-A Island cutter, which means that it has a range of 3,700 km (approximately 2,300 miles) and can stay at sea for 3-5 days.

The other cutter, renamed the “Fastiv,” is a class-B cutter – it is the same size and weight and has the same engine as the “Sumy,” but it is not equipped for longer stays at sea.
Both vessels compare very favorably to Ukraine’s “Stenka” class cutters, which are essentially the same size, weight and speed, but have a limited range of 500 km. In addition, the Island-class cutters will be fitted with heavier caliber armaments. First Lt. Mykyta Hrechukha will command the “Sumy” and Lt. j.g. Serhiy Scherbyna will command the “Fastiv,” assisted by Petty Officer Dmytro Novakovsky.

Unexpectedly, one of the crew members of the ‘Sumy’ was Master Seaman Andriy Oprysko, who is from Lviv. He was one of the 24 sailors who were captured on November 25, 2018, in the Kerch incident, and spent 286 days in Russian captivity at Lefortovo prison. He said that he was very happy to have taken part in the training and was honored to be a member of the “Sumy” crew and continue his service to Ukraine.

Mr. Oprysko noted that after he was released from prison, he received many letters from various people and groups in the United States, and he particularly remembered receiving many letters from members of Plast Ukrainian Scouting Organiz­ation and the organization’s Chornomortsi fraternity, and was grateful for all the support from the Ukrainian diaspora in the U.S.

Mr. Oprysko talked about the harsh treatment and psychological pressure the Ukrainians sailors dealt with as soon as they were transferred to the Lefortovo prison.

“They didn’t torture us or beat us, but they used other psychological methods, including isolation,” Mr. Oprysko said. “They took us out one by one and told us that ‘…they’ve [the Ukrainian government] sent you off to be slaughtered.’ Their lawyers advised us to fall on our knees before the judge, kiss their robe, admit our guilt and everything will somehow turn out better for us. We held out and did not submit,” Mr. Oprysko said.

After the graduation ceremony, there was a luncheon reception for the crew of both cutters. This was their last weekend in Baltimore, as they all flew back to Kyiv on March 28. 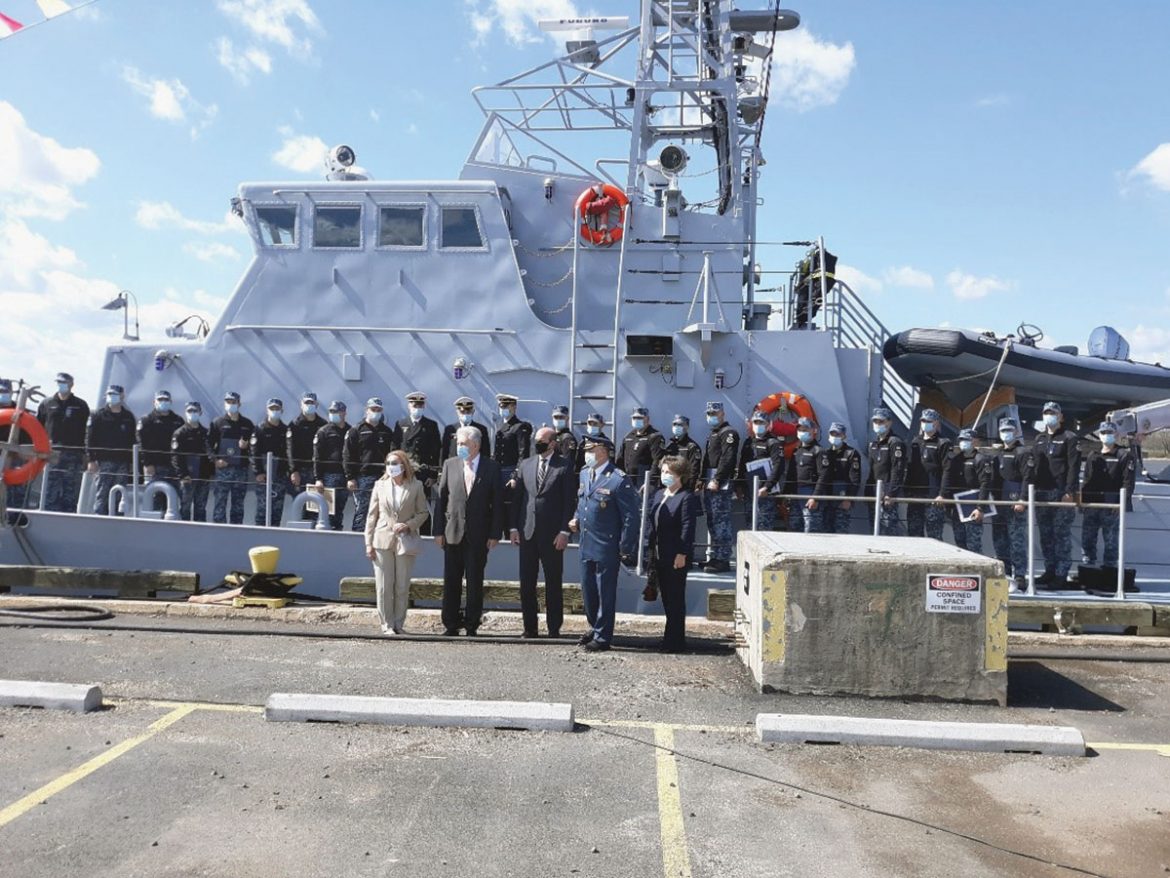 Dignitaries and crews of the “Fastiv” and “Sumy” stand on and in front of the coastal patrol cutter “Sumy.”