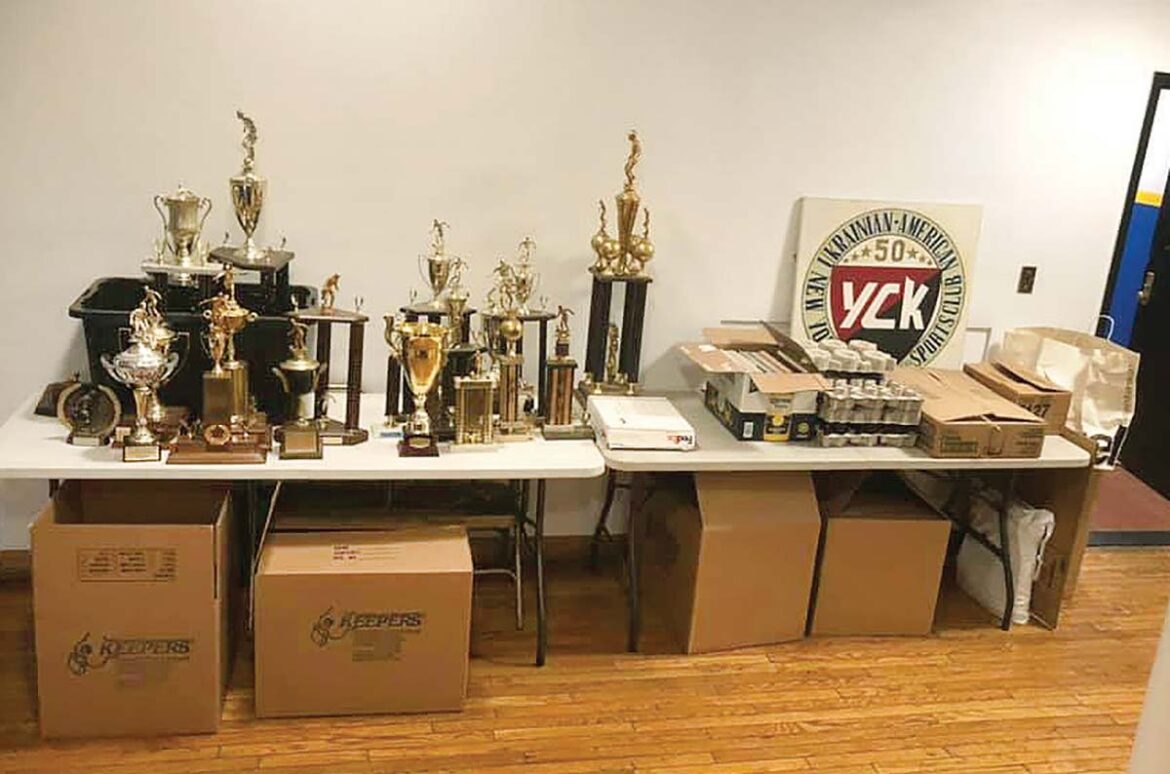 Boxing up club trophies and other items for the move.

NEW YORK – After 46 years of calling Manhattan its home, the Ukrainian Sports Club of New York (known by its Ukrainian acronym YCK) has announced its move to a new home in Brooklyn. The announcement was officially made on September 13 by the club’s president, Willie Zinkewitsch, and the club’s doors were closed.

The club purchased the building at 122 Second Ave. in late 1974, after the club sold its field in Flushing, Queens. When the building was first purchased, it was primarily commercial, fully rented, except for the ground and second floors. Commercial and residential tenants occupied the third, fourth and fifth floors. After the purchase was finalized, the club renovated the ground floor as well as the second floor with the guidance of George Rycar, the architect of record and the clerk of works in 1975. 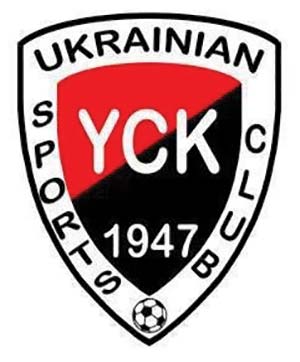 The logo of the Ukrainian Sports Club N.Y.

Over the last five decades, the club has meant much to thousands of people, always welcoming its members and their guests with a smile at this unique location in the heart of the East Village Ukrainian neighborhood.

As guests entered, they would walk down a long hallway with blue and yellow stripes (symbolic of the Ukrainian flag), to a lobby with an amazing mural of printed articles and photographs of the N.Y. Ukrainians soccer teams over the years. The opposite wall of the lobby was filled with a display of the club’s many trophies won throughout the years. From there, guests would ascend a few steps to a classic no-frills bar, with sports matches being shown on any or all of its three television sets.

The club has served as a base of operations for its two Ukrainian soccer teams, hosted countless memorable social and community events, including book readings, poetry (Yara Arts Group events), holiday parties and fund-raisers (for example, for the New York branch of the Ukrainian American Youth Association), and was a venue for significant meetings of members and the club’s board of directors. The club has also hosted many other Ukrainian club teams and their followers: Dynamo Kyiv, Shakhtar Donetsk, FC Karpaty, just to name a few, when they qualified in the UEFA Champions League and Europa League Championships.

Thousands of people have walked through the club’s doors over the years, and each of them could probably cite a memorable moment that happened there. Mr. Zinkewitsch said it has been his “second home, watching international soccer matches via Setanta Broadcasting, when few sports bars in New York City were able to broadcast live games.” He added: “The 2006 World Cup, hosted by Germany, was one of the most exciting moments at YCK. We hosted many different ethnic soccer fans supporting their World Cup teams to the finals.”

When it comes down to a place to watch international soccer, “YCK was the place to be in the Lower East Side/East Village,” Mr. Zinkewitsch said. In addition to soccer, boxing became a second sport of interest for many people to gather here, particularly when the Klitschko brothers – Vitali and Wladimir – fought and defended their heavyweight championship titles.

Dr. Nicholas Skirka fondly recalled: “I remember playing cards in YCK when we occupied two floors. I was teaching at St. George [Academy], coaching the youth team and playing for YCK from 1975 to 1980. Sadly, Manhattan has become overcrowded and too expensive. It is time for us to sell and move out. When YCK occupied two floors, we had some joyous celebrations and gatherings. I have some fond memories of the YCK building.”

Bohdan Pryjmak noted: “In 1985 my family and I celebrated my first holy communion on the second floor. It was a great time to be an 8-year-old, because my entire extended family was there to celebrate, along with plenty of room for all of the kids to run around. Ever since then, 122 Second Ave. has always been a great place to meet up with family and friends.”

Iurii Vovk stated: “Back in 2013, I moved from Massachusetts to the tri-state area. It was a surprise while walking on Second Avenue in Manhattan that I saw the sign Український Спортовий Клюб (Ukrainian Sports Club). I was so impressed when I walked in and saw all the trophies. I learned about the great history of our club that dates back to 1947. I signed up for the reserve soccer team. Since 2013, I am an active soccer player of YCK. I have great memories meeting with teammates at the club, especially for Christmas parties and inauguration ceremonies.”

The club’s building in Manhattan was sold in 2016, but the club remained in the back of the ground floor. The decision to move out has been a very difficult one. The rental lease has expired and the club is ready to find a new permanent location.

There are many unforgettable memories at the club that its members and guests will hold onto forever. There have been a few unpleasant memories, like in May 2010, when an explosion on the fourth floor of the building devastated the property and a minor fire occurred shortly thereafter on the first floor.

Exciting changes are assured by the club as it refocuses for the future, and the club will continue to function with their respective adult and youth athletic programs during the transition, with complete support for the community along the way. The youth program, with volleyball and soccer instruction, will be expanding to include chess and table tennis, once the COVID-19 pandemic safeguards have been lifted. The youth program is scheduled to continue its operations in the East Village, but in a neighboring building.

In the meantime, the club’s board of directors is also going through a restructuring, with aims to expand membership, increase participation in matches and tournaments, and find a new home in a location closer to McCarren Park, where the YCK adult soccer team plays in Brooklyn. An official announcement from the club will be forthcoming once a purchase has been finalized.

The club’s home on Second Avenue will be dearly missed, but the club looks forward to finding another remarkable location for the organization to continue to thrive for generations to come.