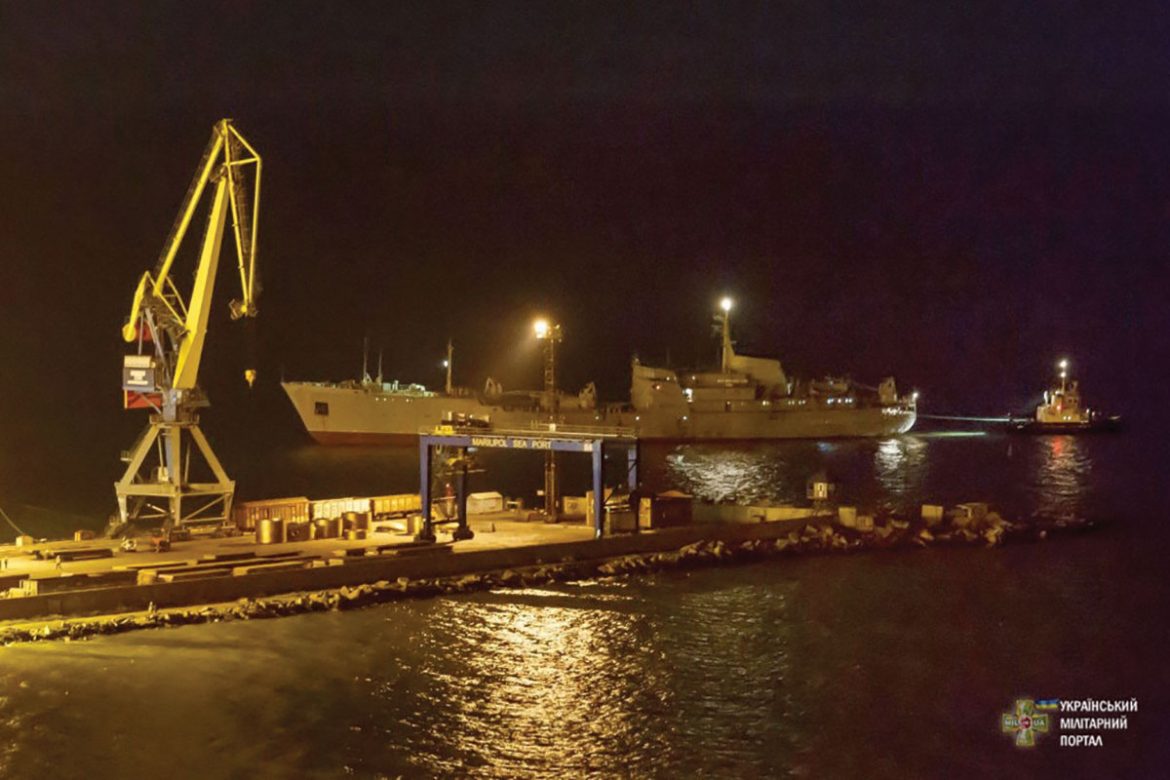 The Ukrainian naval vessel Donbas in the port of Mariupol in the evening of September 24.

Ukraine is going to create a naval base in the Sea of Azov amid tensions with Russia in the region. On September 23 the Ukrainian Navy deployed two naval auxiliary vessels to the Sea of Azov. The event could have been routine if only the Kerch Strait had not been occupied by Russia since spring 2014 and the Kerch Strait Bridge had not been completed in early 2018. Since May of this year, Russia has been illegally detaining and inspecting ships passing between the Black and Azov seas.

The passage of the Ukrainian ships became a headache for Russia since it claims the adjacent waters in occupied Crimea are Russian, while the rest of the world considers them Ukrainian.

The two ships examined how far Russia will go. Russia chose to do nothing.

On September 16, the Ukrainian government announced its plans to create a naval base in the Azov Sea before the end of the year. A few days later, President Petro Poroshenko confirmed that intention in his address to the Verkhovna Rada.

The Ukrainian Military Portal (UMP) media outlet reported on September 23 that the ships of the Ukrainian Navy, search and rescue vessel A500 Donbas and the tug A830 Korets, had left the Western Naval Base in the Black Sea port of Odesa for Berdiansk on September 20  to establish a new Ukrainian naval base in the Sea of Azov. No official reports were released at that time and the UMP cited its own sources.

According to a 2003 bilateral agreement, the Sea of Azov is an inland sea of two states, and civil and military vessels under the flags of Ukraine and Russia can pass through the strait and travel to their ports. With the deterioration of the situation on the Azov Sea, the command of the Ukrainian Navy decided to act in accordance with the needs that have arisen, explained the UMP.

According to September 22  report by the Russian state news agency TASS, two ships of the Ukrainian Navy “crossed into Russia’s exclusive economic zone off Crimea” and were “being escorted by ships of the Russian FSB Border Service’s Coast Guard.”

Two ships of the Russian border guard patrol started escorting the Ukrainian warships as they were passing by the occupied port of Sevastopol. As the Ukrainian “convoy” was approaching the Kerch Strait, the Russian escort grew to at least seven military sea craft, among them were: the tug SB-739 KChF; two patrol boats of the project 03160 “Raptor” carrying the special force of Russia’s Black Sea Fleet; the project 10410 “Setlyachok” ship of the FSB’s coast guard; two “Mangust” boats of the project 12150; and a boat of the project 21850 “Chibis” of the FSB’s coast guard.

As of September 23, 10:25 EEST (Eastern European Summer Time), the warships approached the area of the Kerch Strait.

Later, reports emerged that the Ukrainian small armored artillery boats P177 Kremenchuk and P178 Lubny, earlier brought by land to Berdiansk, departed from the port in the direction of the Kerch crossing, to meet the Donbas and the Korets.

A video shared by the pro-Russian local news site KerchInfo shows the passage of the Donbas and the Korets under the bridge followed by two Russian armored boats and two more escort ships.

The late official Russian reaction was: “Ukrainian naval ships Donbas and Korets passed through the Kerch Strait, which links the Black Sea and the Sea of Azov, with due permission from Russian control agencies that is required under law,” as TASS reported, citing the press service of Russia’s Federal Agency for Maritime and River Transport [Rosmorrechflot] on September 24.

According to UMP’s update of September 24 at 20:10, the search and rescue ship Donbas and sea tug Korets arrived in Mariupol escorted by Ukrainian armored artillery boats Kremenchuk and Lubny.

Beginning in May, Russia imposed a “hybrid blockade” of Ukraine’s Azov northern-coast seaports of Berdiansk and Mariupol. The Russian FSB’s border guard service has been carrying on illegal inspections of all commercial vessels sailing to and from the Ukrainian ports.

In August, the secretary of Ukraine’s National Security and Defense Council, Oleksandr Turchynov, warned that Russia planned “further expansion” and sought to impose a “military and economic blockade of Ukraine’s Azov coast.”

One of the clear Russian objectives is to undermine the economy of Berdiansk and Mariupol. Shippers, delayed by the inspections, are losing between $5,000 and $15,000 per hour as a result of the Russian checks. The Russian strategy is to make imports and exports from both ports economically unprofitable.

Since Russia failed to grab a land corridor to Crimea by military force back in late 2014, it decided to join the occupied peninsula with mainland Russia via a bridge in the Kerch Strait. However, Crimean agriculture and industry suffer without Ukrainian water supplies from the Dnipro River, which were cut off shortly after the beginning of the occupation. So the issue of a land corridor to Crimea persists for Russia.

What could Russia do?

Russia could try to detain the Ukrainian ships or even arrest them since they were passing through what Russia believes to be its territorial waters. This could result in new international sanctions against Russia, because only Russia considers Crimea and its territorial waters Russian. For the rest of the world, Crimea remains Ukrainian.

Russia could try to attack the ships in the Azov Sea with the so-called “DPR Naval Force” – a few fishing boats remade to carry firearms. In this case, Ukrainian armored artillery boats would drown the Donetsk “people’s republic” craft, and there would be no significant consequences even for the Minsk peace process, since the accords are about a peace settlement on land and there’s nothing about sea warfare.

The last option is to let the Ukrainian ships pass, and Russia has chosen to do just that. Such a decision was detrimental only to the Kremlin’s domestic public image – Ukrainian ships coming without any problem through “Russian territorial waters” demonstrates that “Great Russia” isn’t as strong as its propaganda image purports it to be.

Ukrainian naval expert Taras Chmut believes the Russian Navy most likely didn’t expect Ukraine’s ships to risk passing through the Kerch Strait. “We seized the initiative,” Mr. Chmut said. “For the first time, we didn’t just react to the Russians’ steps, but started to set our own game rules.”

The article above was originally posted by Euromaidan Press on September 25 at http://euromaidanpress.com/2018/09/25/ukrainian-warships-break-russian-de-facto-blockade-in-azov-sea-to-create-naval-base/. It has been edited here for clarity.