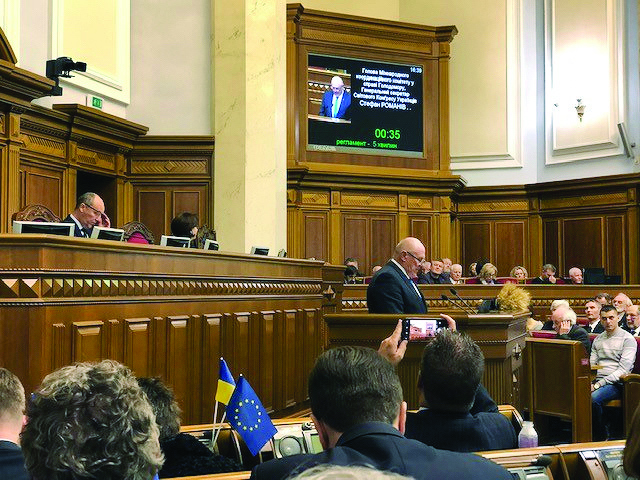 KYIV – On November 24, at the National Cultural-Art Museum Complex Mystetskyi Arsenal in Kyiv, the International Forum “Ukraine remembers! The world acknowledges!” was held to commemorate the 85th anniversary of the Holodomor with the participation of delegates to the XI Ukrainian World Congress (UWC).

UWC President Eugene Czolij addressed this forum. He noted that 85 years ago Soviet dictator Joseph Stalin created hell on earth in Ukraine and that the Holodomor genocide was a deliberate act of Stalin’s totalitarian regime against the Ukrainian people. He highlighted that the aim of the Holodomor was to liquidate the clergy, intelligentsia and Ukrainian peasants, while protecting the Soviet regime from the resistance of the Ukrainians and the threat of a liberation struggle of the Ukrainian nation for its independence.

Mr. Czolij also noted that today the Russian Federation continues its hybrid war against Ukraine so as to, just as in the 1930s, break its will. Therefore, the UWC president concluded, the international action “Light a Candle of Remembrance,” initiated by the UWC with its Ukrainian partners in 85 countries over 85 days with the goal of achieving recognition of the Holodomor as a genocide, is an important part of combating today’s military aggression against Ukraine and the values of humanity.

The forum concluded with a video featuring the “Light a Candle of Remembrance” project.

Delegates to the XI UWC Congress also participated in the Candle of Remembrance ceremony at the Holodomor Victims Memorial, where hierarchs and clergy of Ukrainian Churches celebrated a requiem in memory of all the victims of the Holodomor. Afterwards, President Petro Poroshenko of Ukraine, high-ranking international guests and the UWC president, joined by all participants, lit candles of remembrance.

Prior to International Holodomor Memorial Day, representatives of the diaspora participated in two additional events related to the 85th anniversary of Ukraine’s genocide : a two-day academic symposium on the Holodomor on November 22-23 and a special session of the Verkhovna Rada on November 23, during which UWC Secretary General Stefan Romaniw, who chairs the International Holodomor Coordinating Committee, delivered an address.