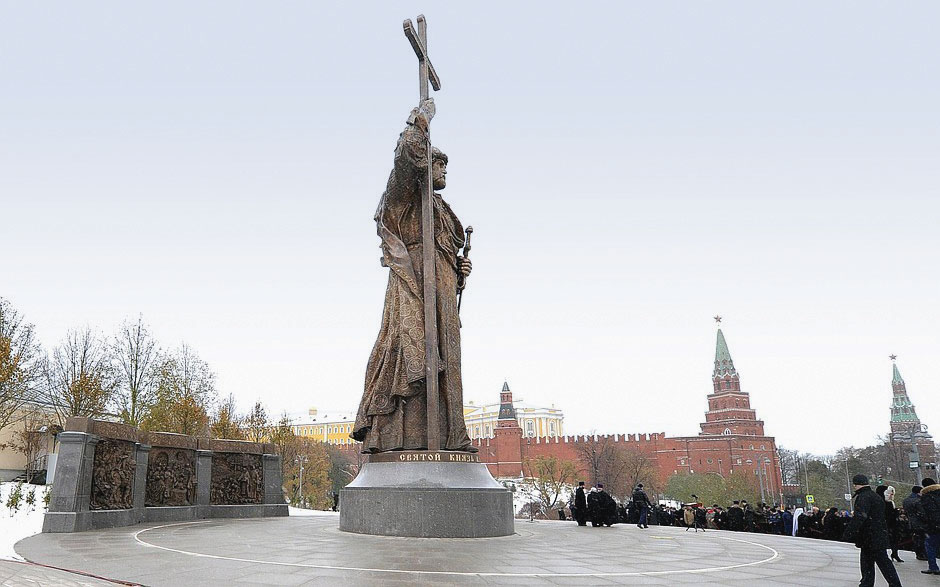 A Statue of Kyiv-Rus Prince Volodymyr the Great is unveiled on Moscow’s Red Square on November 4, 2016.

KYIV – The biggest umbrella organization representing Ukrainians worldwide has for the first time in more than 50 years expelled a member group.

The Ukrainian World Congress (UWC) on March 13 ejected the Association of Ukrainian Societies in Latvia (AUSL) for the group’s alleged “anti-Ukrainian position” and promotion of the “‘Russian World’” ideology, according to a news release from the UWC.

Based in Riga, the banished organization had, since at least 2014 when Russia invaded Ukraine, published materials and engaged in activities that promoted Ukraine as “a brotherly nation of Russia” and would not acknowledge the bloody Donbas war as “an act of aggression by Moscow and instead described it as a civil war,” UWC regional vice president for Central and Eastern Europe Vira Konyk told The Ukrainian Weekly over the phone from Estonia.

Echoing the UWC statement, Ms. Konyk said the Ukrainian-Latvian group was closely monitored on social media, websites and in materials it published over the last seven years.

Some examples of the group’s problematic behavior include “spreading misinformation about the war in eastern Ukraine and slandering the Ukrainian government,” calling it at one point a “fascist faction” that kills children, said the statement from the UWC, which was founded in 1967 and represents more than 20 million Ukrainians in more than 60 countries.

Phone calls placed requesting comment with the office and cell phone numbers listed for AUSL went answered and an emailed query wasn’t delivered because the server said their inbox “is full or getting too much email right now.”

Taras Kuzio, professor of political science at the National University of Kyiv-Mohyla Academy, said the “Russian World” is a concept devised by Russian President Vladimir Putin in 2007 to promote the country internationally, but with malign underpinnings.
It’s a brand of nationalism that considers the eastern Slavs of “Ukrainians, Belaru­sians and Russians as one people,” while the “Soviet version is that Ukrainians and Russians are brotherly nations.”

It draws on the historical myth, he said, that the medieval Kyiv-Rus kingdom is what unites the three eastern Slavic countries, and that “anything done to break that up…like the color revolutions…means you are a traitor and Mr. Putin’s Russkiy Mir [Russian World] concept is a way of recreating the ‘Slavic heart and soul’ of Eurasion integration.”
Thus, the “Latvians were probably kicked out because they subscribed to this viewpoint that Ukraine is part of one nation, which is the same way that the self-proclaimed republics in [Russia-occupied] Donbas think,” Mr. Kuzio said.

Another visible example of “Russian World,” the professor said, occurred when Mr. Putin had “a ridiculous statue” of Kyiv-Rus’ Prince Volodymyr the Great erected at the Kremlin in 2016, “laying claim to Kyiv-Rus history…yet Moscow didn’t exist when he ruled the kingdom; it was founded in 1146.”

The lengthy expulsion process included monitoring the Latvian group in the public domain by the UWC’s membership board, which passed its findings to the executive board, followed by the management board, before a final decision was made, Ms. Konyk said.

She added that she first learned of the activities in 2014 when speaking to other Ukrainian activists in Latvia. Upon further research, Ms. Konyk said that the leadership of AUSL had in 2012 jointly taken part in activities with Russian NGOs to promote Russian as a second state language in Ukraine.

Consisting at one point of up to 14 organizations, some members of AUSL “we noticed would appear on Russian state-run TV channels like Sputnik that are considered propaganda mouthpieces of the Kremlin.”

In an emailed response, UWC president Paul Grod emphasized the solidarity that Ukrainians have with the three Baltic countries of Latvia, Estonia and Lithuania “as the anti-Bolshevik bloc of nations that protested Soviet-Russian occupation and oppression.”

Mr. Grod noted that the people of the Baltic nations, all of whom are members of the European Union and NATO, “stood with the Ukrainian people during the Revolution of Dignity [of 2013-2014].”

He added that it is “reprehensible and totally unacceptable for any Ukrainian organization to support radical Russian groups and Russian authorities who spread disinformation and act as a fifth column to undermine the sovereignty and security of those countries. Such organizations will never be welcome by the Ukrainian World Congress.”

According to its website, AUSL was founded in 2006 and, according to Ms. Konyk, two of its member groups have over the last decade left the organization for unspecified reasons.
The first Ukrainian organization in Latvia was established in Riga, the country’s capital, in 1911 under the name of Hromada (community) as a cultural association.

About 2.2 percent of Latvia’s population of nearly 2 million people identify themselves as Ukrainians, according to the European Commission, the EU’s executive branch of governance. Russians are the largest minority, constituting more than a quarter of the population.