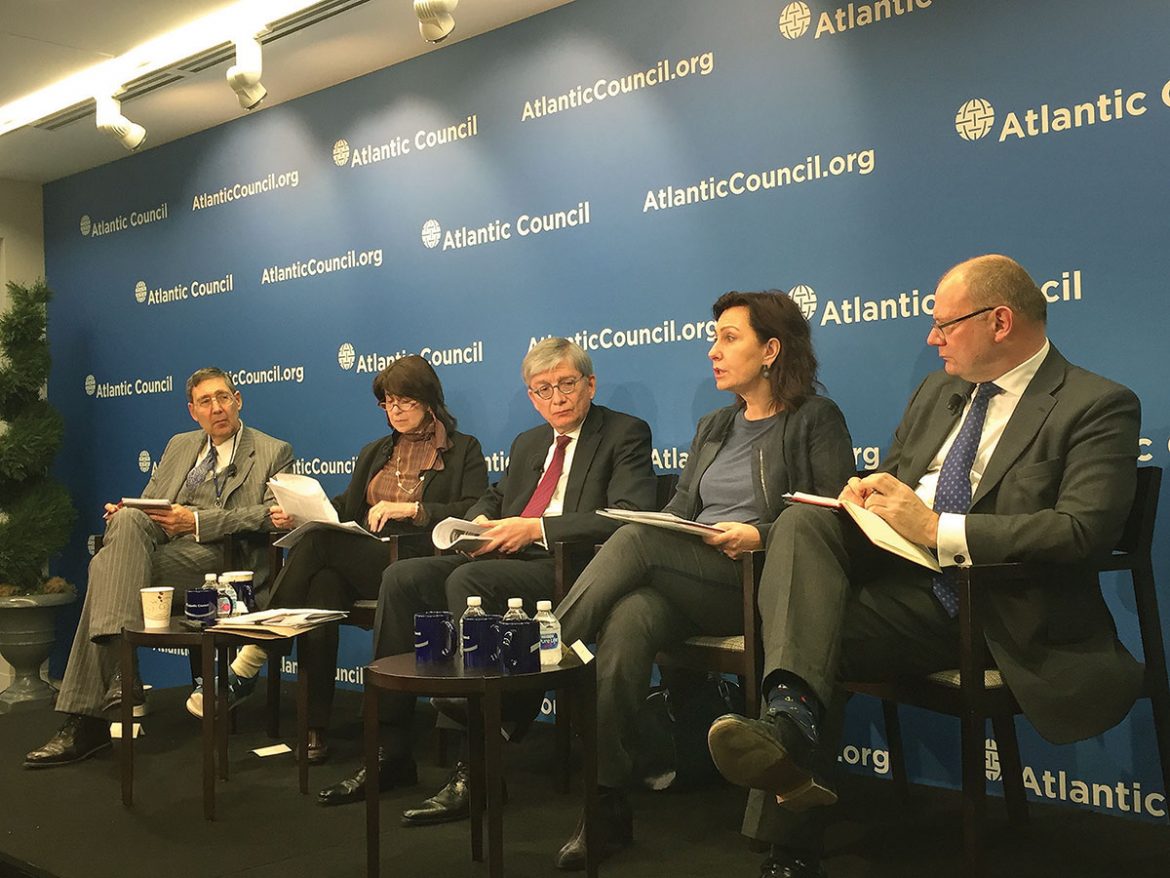 Eugene Czolij (center), president of the Ukrainian World Congress, participates in a panel discussion at the Atlantic Council titled: “Kremlin Aggression in Ukraine: The Price Tag.”

WASHINGTON – Eugene Czolij, president of the Ukrainian World Congress (UWC), participated in a panel discussion at the Atlantic Council in Washington on Tuesday, March 20.  The focus of the two-part panel was the price tag of the Kremlin’s aggression in Ukraine.

Mr. Czolij, partner at the Lavery law firm, based in Montréal, along with other panelists including attorneys, economists and business leaders, spoke of the legal and international conditions for financial compensation and loss of future assets due to war.

Coinciding with the panel discussion, the Atlantic Council’s Dinu Patriciu Eurasia Center Resident Senior Fellow Dr. Anders Asland issued a report titled “Kremlin Aggression in Ukraine:  The Price Tag,” in which the author states:  “Since the annexation [of Crimea], Russia has carried out extensive confiscation of public and private property, which it has referred to as ‘nationalization’ under Russian Federation legislation.”  The report can be found on the Atlantic Council’s website.

The nearly hour-long discussion focused on several key elements to advancing peace in Ukraine: increasing sanctions on the Russian Federation for its continued aggression in Ukraine and illegal annexation of the Crimean Peninsula; affording Ukraine continued defensive military weapons to defend its territorial sovereignty and independence; and providing Ukraine the tools needed to combat corruption in order to help sustain and expand Ukraine’s economy. Coordination of assistance with other U.S. allies was also discussed as a means of strengthening relationships with Ukraine and promoting needed reforms. 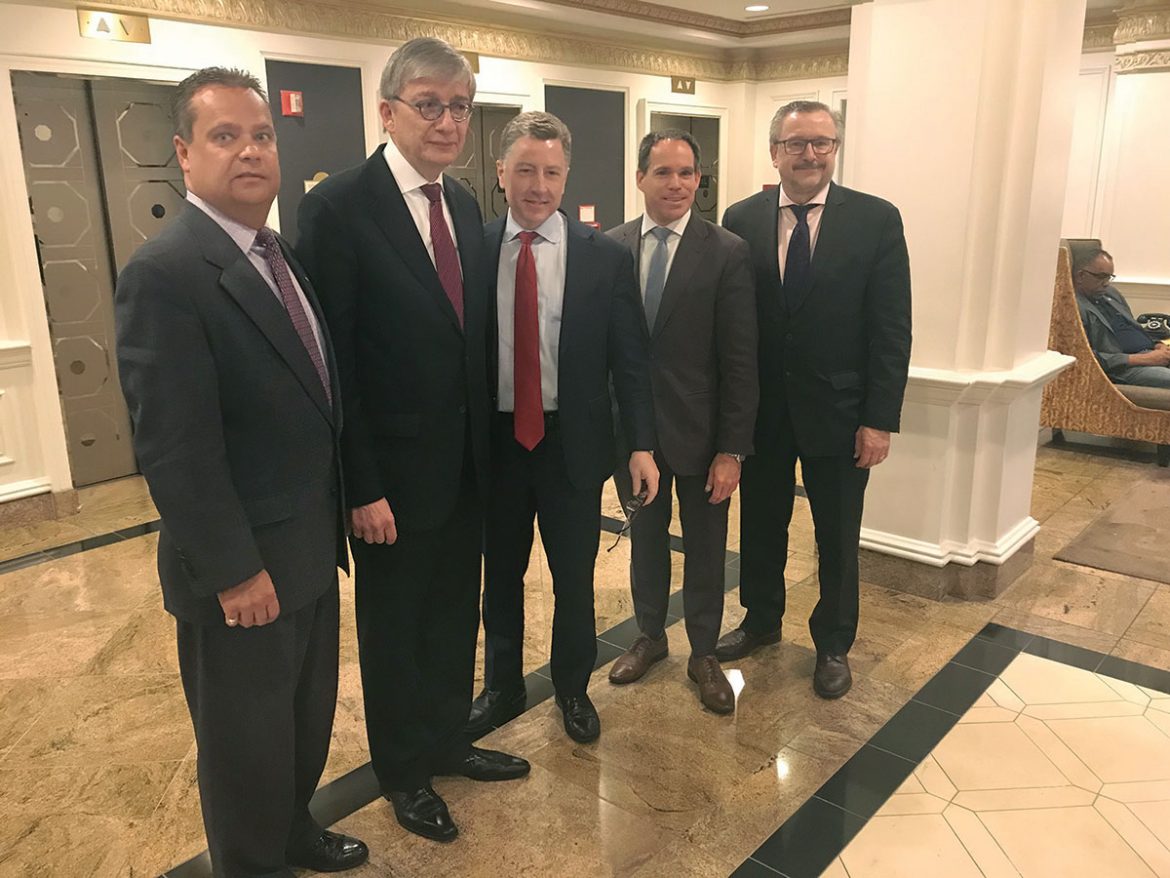 The Ukrainian diaspora representatives expressed their gratitude to Ambassador Volker for his efforts to resolve the ongoing Russian war in Ukraine.  A discussion ensued regarding the upcoming NATO summit and the alliance’s re-commitment to an “open door” policy for aspiring countries.  Four countries have indicated their aspirations to become members of NATO:  Georgia, Ukraine, Bosnia and Herzegovina, and the former Yugoslav Republic of Macedonia.

Additional conversation centered on Crimea and the human, religious and national rights abuses on the illegally annexed peninsula.  On the anniversary of Russia’s illegal annexation of Crimea, the Department of State issued a statement on the current conditions in Ukraine and called for the return of the peninsula to Ukraine. The statement underscored: “Crimea is a part of Ukraine. The United States again condemns the Russian occupation of Crimea and calls for its immediate end. Our Crimea-related sanctions will remain in place until Russia returns control of the peninsula to Ukraine.”

While in Washington, Mr. Czolij also met Rep. Doug Lamborn (R-Colo.), member of the Congressional Ukraine Caucus. Having traveled to Ukraine last year, the congressman expressed his support for advancing U.S.-Ukraine bilateral relations. Congress was to vote later that week for a spending bill that included appropriations for assistance to Ukraine, as well as Ukrainian security assurances.  Both Mr. Czolij and Mr. Sawkiw conveyed their appreciation for Rep. Lamborn’s support and encouraged him to continue his efforts within Congress to bring an end to the Russian war in Ukraine. 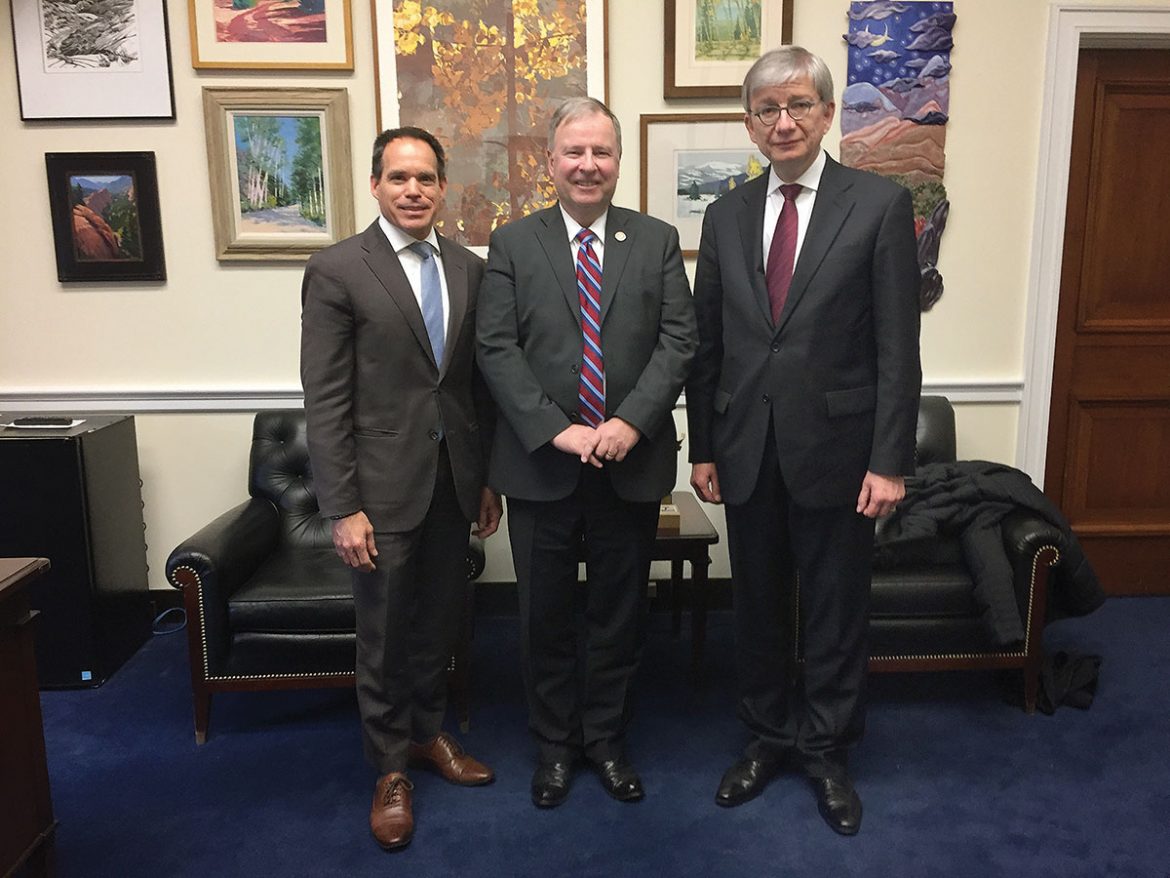 The day’s meetings concluded with meetings with administration officials in the Office of the Vice-President and the State Department.  A range of topics was discussed, including support for Ukraine’s reform initiatives; increasing sanctions against Russia to include sectoral sanctions; the internal dynamics in Ukraine; combatting hybrid/information warfare in Ukraine; and promoting greater awareness about the severe human and national rights abuses in Russian-occupied Crimea.

On behalf of the worldwide Ukrainian diaspora, the UWC president thanked the United States for its global leadership in support of Ukraine.