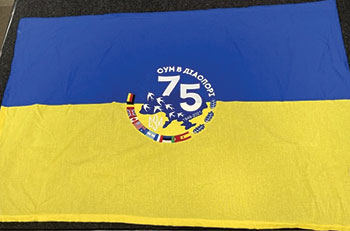 The CYM 75th anniversary in the diaspora flag.

The flag was blessed by Bishop Bohdan Dzyurakh and Bishop Petro Kryk of the Ukrainian Catholic Apostolic Exarchate of Germany and Scandinavia (Bishop Bohdan succeeded Bishop Petro as exarch) at the Cathedral of the Intercession of the Mother of God and of St. Andrew the First-Called in Munich. The flag departed on its world tour for its first stop in Belgium.

The flag is scheduled to visit all 12 countries where CYM branches are active today: Belgium and France in May; Spain and Portugal in June; Great Britain in July; Australia and Argentina in August; the United States of America in September; Canada in October; and Estonia and Ukraine in November. Each country will hold official ceremonies, to the extent possible in the restrictive conditions of the pandemic, and its presence in each country will be validated in the official passport that will accompany the flag on its world tour.

The world tour will conclude when the flag is carried to the top of Ukraine’s highest peak – Mount Hoverla (6,762 feet) in the Carpathian Mountains.

After many years of continuous research, CYM confirms that the founding date of the organization in the diaspora was April 25, 1946.

On that day, on Dachauer Street in Munich, Germany, the first organizational meeting by the founding committee took place, convened by a member of the Organization of Ukrainian Nationalists (OUN), Ivan Wowchuk.

Amongst the people present that day were leading members of OUN: leader of the youth sector Hryhorii Naniak, his deputy Vasyl Markus’ and Slava Stetsko. At that meeting, the organization’s program and statute (by-laws) were adopted. Later that same day another meeting took place at which the members of the initiative group, led by Mykhailo Serdiuk, were elected and the founding date of the organization was established – April 25 as the date of the renewal of the Ukrainian Youth Association that had existed previously from 1925 to 1930 in Ukraine.

Further proof that the actual founding date of CYM in the diaspora is April 25, 1946, and not the previously believed dates of June 10 and/or July 6, is that the poster marking the Second CYM Congress, held in Augsburg, Germany, April 24-25, 1948, stated that the founders were organizing the Congress exactly two years to the date after the founding of the organization.

For more information, as well as additional historical evidence, the full article can be found here (in Ukrainian only): https://cym.org/en/world-executive/sum-v-emihratsii-iak-koly-i-z-choho-rozpoch. For additional information about the CYM 75th anniversary and the flag world tour, readers can visit the CYM website, https://cym.org/cymdiaspora75/#stats, and the Global CYM Facebook group, www.facebook.com/global.CYM.