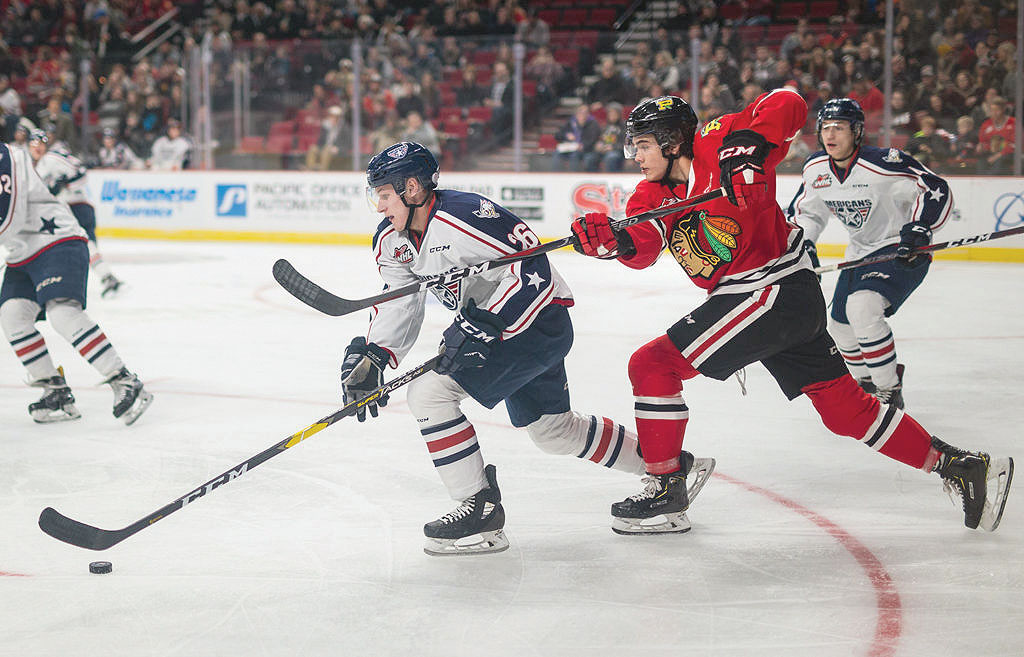 Riley Sawchuk of the Edmonton Oil Kings in the Western Hockey League.

Riley Sawchuk of the Edmonton Oil Kings in the Western Hockey League.

A grand total of 43 known youngsters of Ukrainian descent dotted rosters of the three major junior circuits in the 2019-2020 hockey season with the Western Hockey League boasting the vast majority (35). The Swift Current Broncos led the way with four Ukrainians, including brothers Aiden and Kaleb Bulych, while the Saskatoon Blades and Calgary Hitmen each had three Ukie skaters, the latter club also with two brothers, Josh and Luke Prokop. A third set of brothers were split between two different teams: defensemen Logan (Edmonton Oil Kings) and Keaton (Prince George Cougars) Dowhaniuk. Six Ukrainians were located in the Ontario Hockey League and a pair was found skating on rinks in the Quebec League, including Kharkiv, Ukraine, native Alexander Peresunko.

Twenty-six of the above 40 played forward, with 11 centers, eight right wingers and seven left wings. There were 12 defensemen and five goaltenders.

Speaking of draftees, Los Angeles Kings’ signee Aidan Dudas tallied 15-38-53 in 48 games with Oshawa. Among Ukrainian goaltenders, Lethbridge’s Carl Tetachuk’s three shutouts helped comprise a sparkling 21-12-1 record in 41 games, with a 2.82 GAA and .903 save percentage. Flint’s Anthony Popovich donned the pads in 47 games, winning 29 of them.

The young Ukrainian’s chance to make the jump to the pros begins this coming fall with Hershey (AHL) as the destination assuming he eventually signs an entry-level contract with the Washington Capitals, who drafted him in the 2018 NHL draft. He has demonstrated the necessary skills for this opportunity, with offensive production being his best asset. He needs to shoot more in order to capitalize on his high shooting percentage – 17.6 percent in 2019-2020, compared to 12.8 percent in 2018-2019 and 12.5 percent in 2017-2018. His stats indicate an improved trajectory of shot accuracy with a need to find ways of generating more shots.

It is noteworthy Florchuk was the 217th and final selection in the 2018 NHL Entry Draft, known in hockey circles as the NHL’s “Mr. Irrelevant.” Based on his consistent improvement in offensive production during his four years of juniors, there is little doubt this young man will be relevant in professional hockey very soon. 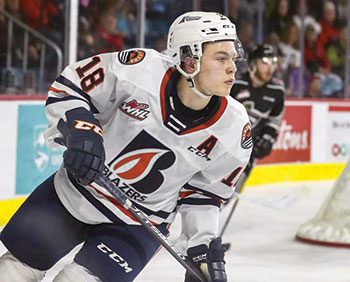 Connor Zary of the Kamlopps Blazers in the Western Hockey League is a prospect to the NHL’s Calgary Flames.

One of the questions hockey folks had entering the 2019-2020 Oil Kings season was how much of an impact could the offseason addition of Riley Sawchuk have on a squad which was facing quite a bit of transition with their roster. Everyone realized Edmonton would need to find scoring from new places in their lineup if they had any hope of a successful year. The question was answered by Riley Sawchuk, stepping up big time to contribute offense in spades and the Oil Kings ended 2019-2020 as the WHL’s third best team overall with 94 points and 42 wins. Sawchuk finished as his team’s top point producer with 25 goals, 51 assists and 76 points in 64 games, good for 11th-best in the entire circuit.

The 21-year-old Ukrainian turned heads in his overage campaign. His 51 helpers ranked him seventh in the WHL as he took full advantage of opening up his offensive ceiling in Edmonton. His coaches were well aware there was another level for Sawchuk to reach in his career.

“His game has grown since we got him here,” said Oil Kings assistant coach Luke Pierce in a November 2019 interview with DUBNetwork. “Brad Lauer [head coach] has done a great job with him as far as pushing him to not just ride out his 20-year-old year and setting some expectations really high and, at times, being hard on him.”

The upward path of Sawchuk’s career point totals gave clear signs his game had the potential to grow, with his points more than doubling in each season since breaking into the league in 2016. In 55 games his first year he scored seven points, then hit 24 points a season later, followed by 53 points in 67 games. He would have probably eclipsed the 80-point mark in 2019-2020 had the COVID-19 pandemic not canceled the club’s final four regular season contests.