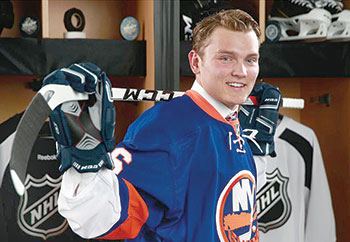 Kieffer Bellows of the American Hockey League is a prospect to the NHL’s New York Islanders.

Our annual peek at the three minor leagues in professional hockey reveals a total of 44 players of Ukrainian descent seeing action in the coronavirus shortened 2019-2020 season. Seven of the above also skated for their NHL clubs – of these, Taylor Fedun (Dallas) and Greg Pateryn (Minne­sota) were on injury rehab assignment while Jayce Hawryluk (Florida to Ottawa) and Curtis Lazar (Buffalo) were awaiting either a waiver claim or permanent recall, respectively. The remaining three players received emergency call-ups by their parent clubs to assist injury depleted rosters. Kieffer Bellows (N.Y. Islanders), Josh Mahura (Anaheim) and Zach Senyshyn (Boston) all made a most positive impression during their limited time in the big show.

Kieffer Bellows of the American Hockey League is a prospect to the NHL’s New York Islanders.

Eighteen Ukrainians skated in the American Hockey League (including the seven mentioned above), 17 played in the East Coast Hockey League and another 11 were active in the Southern Pro League. Two left wingers, Zach Franko and Jonah Wasylak, played in both the ECHL and SPHL, while goalie Zach Sawchenko split time in the AHL and ECHL. Breaking it down by position, 13 Ukes are left wingers, 11 are centers, nine are defensemen, eight play right wing and three tend goal. Thirty-two of the 44 are forwards. There were two brother combos in the minors, one consisting of Charlotte’s Hunter Shinkaruk (20GP, 4G, 3A, 7 PTS) and Evansville’s Carter Shinkaruk (5GP, 0-0-0). 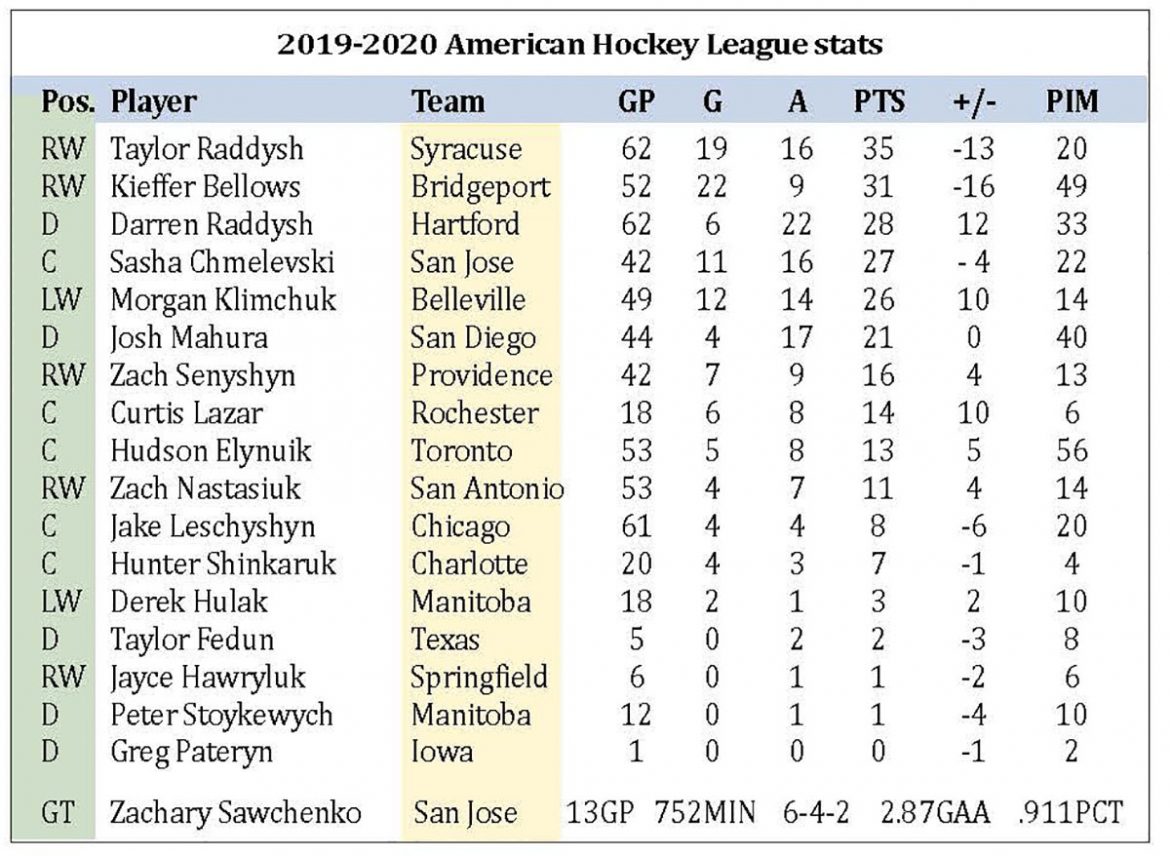 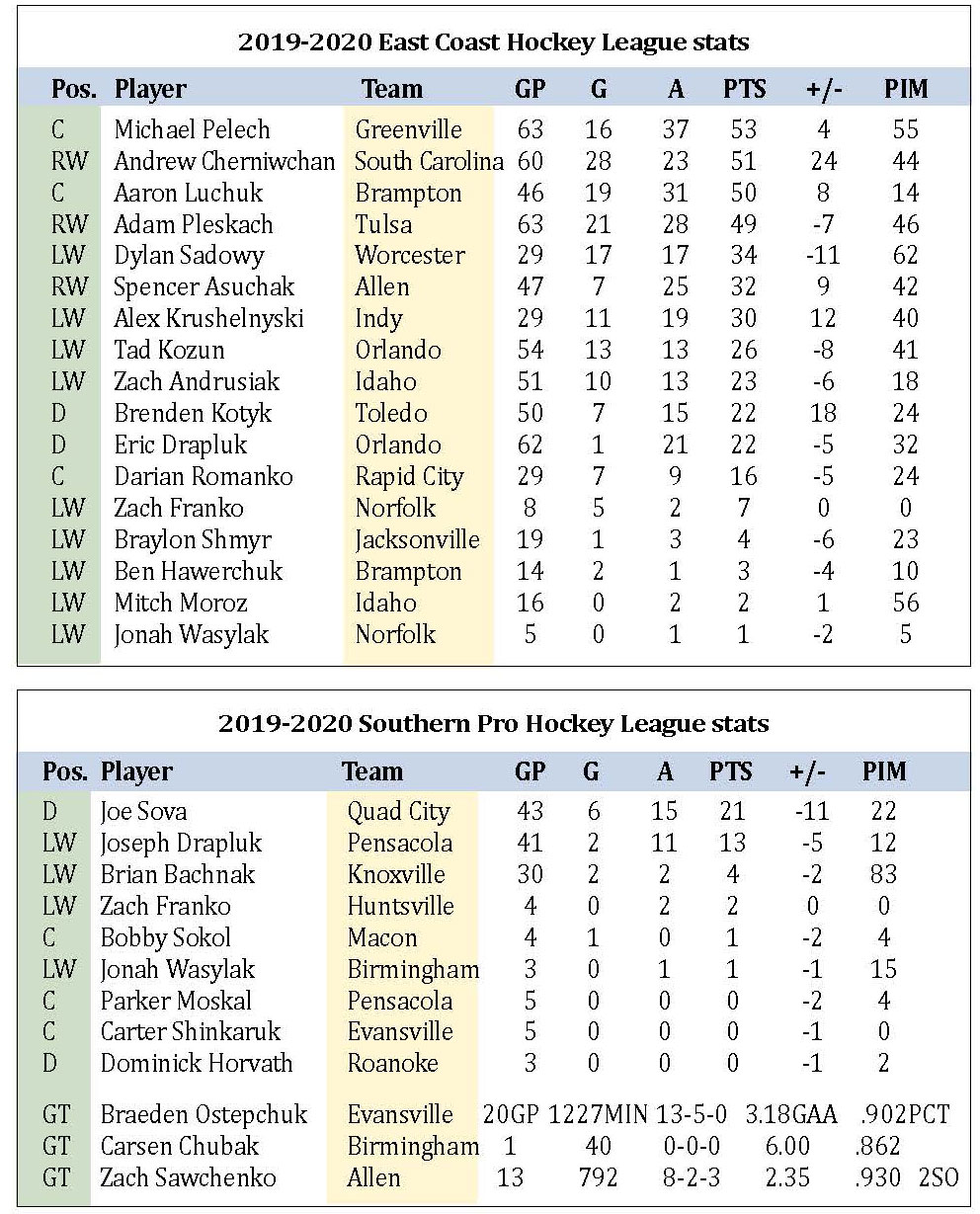 Speaking of the ECHL, South Carolina’s Andrew Cherniwchan (28 goals and 51 points, see below), Brampton’s Aaron Luchuk (19-31-50 in 46 games), Tulsa’s Adam Pleskach (21-28-49) and Greenville’s Michael Pelech (53 points in 63 games) were top Ukrainian point producers. Mike Krushelnytski’s son, Alex, got into 29 games with Indy, impressing immensely by notching 11 goals and 30 points with a plus-12.

Cherniwchan leads Stingrays to top of ECHL
He was honored with a letter on his sweater for the second consecutive season in 2019-2020, but this year, instead of an alternate “A,” he was bestowed the captain’s “C.”

Following the most productive East Coast Hockey League campaign of his career in 2018-2019 when he dressed in all 72 of South Carolina’s regular season games and scored 29G, 38A, 67PTS, Cherniwchan was named Stingrays team captain.

“I think you have to have a leader that everyone can look at and turn to,” said Stingrays head coach Steve Bergin in a November 2019 press release making the official announcement of the captaincy. “Our whole mentality for the entire season is that everything has to be earned, nothing is given. We felt that just because someone has been here, doesn’t mean they’re automatically the captain. We wanted to see how these guys interacted with the group, how they handled practices and certain situations and Cherny’s been great. It helps that he’s been here and he understands our culture and how important it is to do things the right way, but more importantly, he’s been a really good leader for the group, and he shows up to work hard every day.” 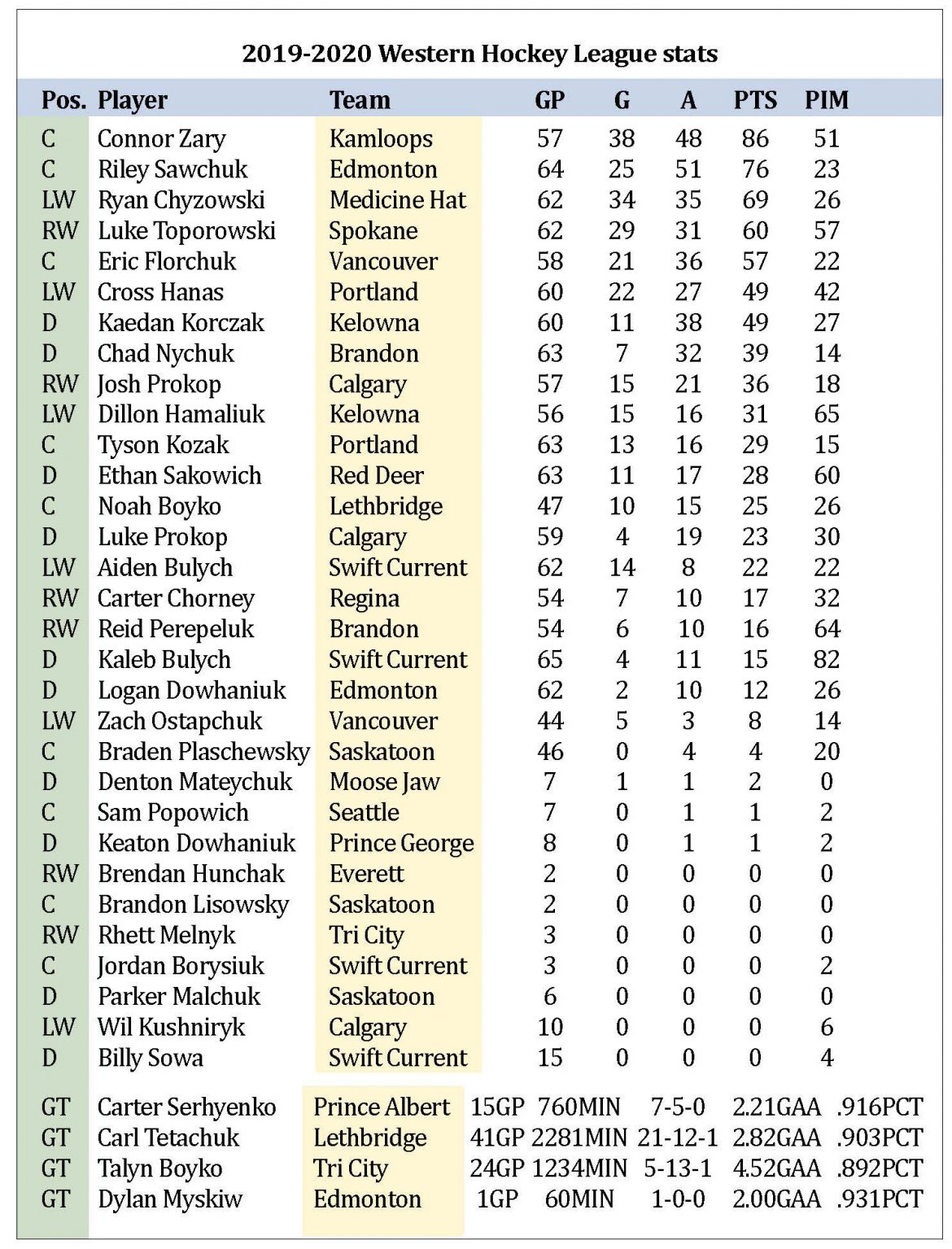 South Carolina has been the only ECHL organization the Ukrainian has played for in his career since first signing a contract with the club during the second half of the 2011-2012 season. His American Hockey League career has included 173 regular season games with Utica, Providence and Springfield, scoring 46 points (25 goals). He also saw action in 20 AHL playoff games, including four with Hershey in the spring of 2019, notching a goal and three points.

“We have a lot of good leaders here, but it’s definitely an honor and I’m really happy to wear the ‘C’,” Andrew said in the same team press release. “When you think of all the other names that have worn it in this organization, it’s a pretty amazing thing. I just want to represent this organization well and help everyone out the best that I can. I think with the group we have we can do some really good things and that’s what makes this year exciting.”

Really good things they certainly did as South Carolina finished the shortened 2019-2020 season with a record of 44 wins, 14 losses and 4 ties in 62 games, their 92 points tied for first in the South division and for most points in the league with Florida.

Cherniwchan’s 28 goals, eight powerplay markers and four short-handed goals all ranked atop his club’s statistics table. His 51 total points tied for first with Max Novak. The team’s first-year captain was the team’s most outstanding player, lending much credence to the phrase “leading by example.”

Bellows longs to be an Islander
Heading into this off-season, one question the New York Islanders need to answer is did prospect Kieffer Bellows do enough down on the farm in Bridgeport to warrant an NHL roster spot next year. Well, he finished the abbreviated 2019-2020 season as the Sound Tigers’ leader in goals (22) and points (31) in 52 games, much more production than his first year as a pro. Year one saw him produce a mere 12 goals and 19 points in 73 games. His 31 in 52 projected to 44 points over a 73 game campaign. This season he even got a short stint with the parent club, dressing in eight games and notching a pair of assists and his first career NHL goal.

Will he get a shot with the Islanders next season? Assuming compliance buyouts for salary cap purposes, it is probable Andrew Ladd and Ukrainian Johnny Boychuk will be gone. Further assuming the club’s top two forward lines remain the same, this leaves Michael Dal Colle, Leo Komarov, Oliver Wahlstrom and young Kieffer battling it out for two forward slots on the J.G. Pageau line. This year the Isles tried Dal Colle and Komarov with Pageau and received very little offensive production.

Ideally, Bellows would get a shot on the third line with the notion he’d have a much better chance at producing offense playing with the talented Pageau, coming off a career-best 26 goals. Now 22 years old and with two years in the AHL, more seasoning in the minors is not the answer to the Ukrainian’s continued development. He likely would do best riding shotgun with Pageau or even Brock Nelson.

All things considered, the response to the above question is in the affirmative. Kieffer Bellows did enough in the AHL with his 22 goals and his impressive stint with the big club. He has the size and the talent, so hopefully the organization believes in him enough to give him an opportunity at full time NHL duty.