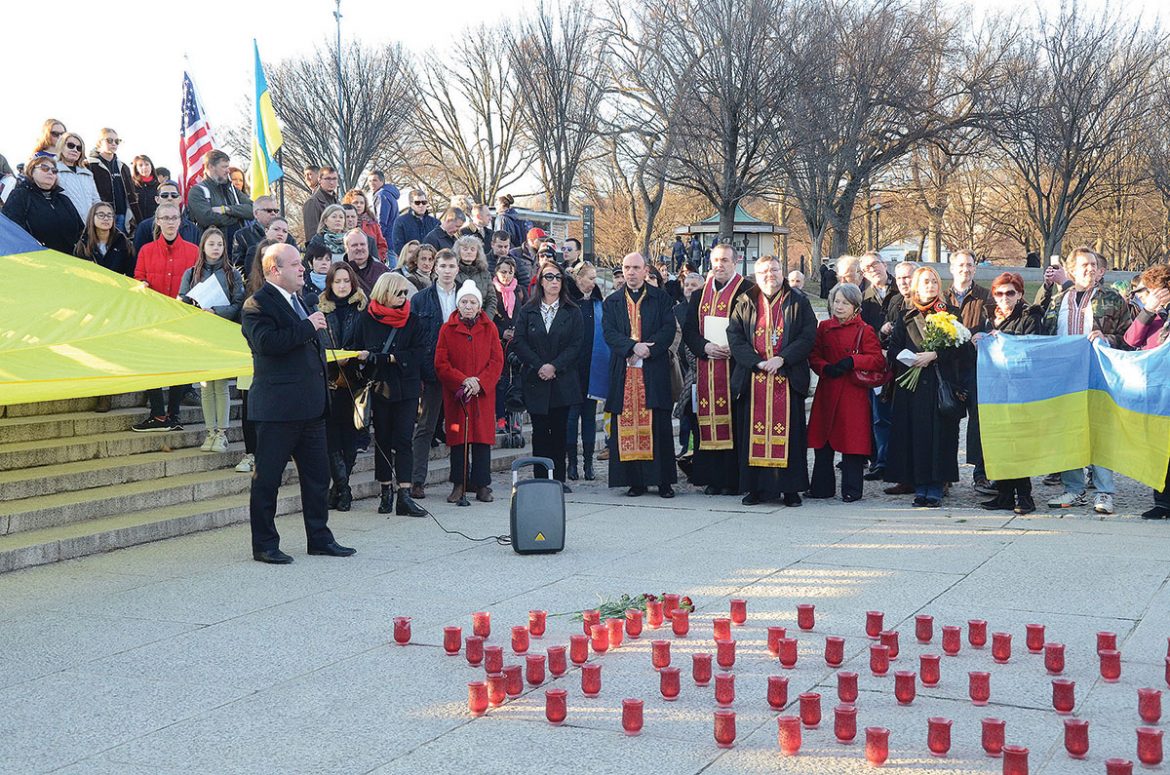 Ukrainian Ambassador Valeriy Chaly discusses the importance of commemorating the anniversary of the Heavenly Hundred, describing why we should continuously “bow our heads low” to the Heavenly Hundred who gave their lives to defend freedom, democracy and human rights in Ukraine.

WASHINGTON – A mass gathering of Ukrainian Americans with large and small Ukrainian flags in hand occupied a portion of the steps in front of the Lincoln Memorial on the National Mall February 18 to commemorate the Heavenly Hundred who were killed four years ago in Kyiv while protesting the pro-Russian government of President Viktor Yanukovych.

This now-annual event was organized by the Embassy of Ukraine and four Ukrainian American organizations, United Help Ukraine, Razom for Ukraine, the U.S.-Ukraine Foundation and U.S.-Ukrainian Activists, whose representatives addressed the gathering, and the thousands of tourists walking by that Sunday afternoon.

After the playing of the mournful Ukrainian folk song “Plyve Kacha” and the recitation of prayers by Ukrainian priests, Ukraine’s Ambassador to the U.S. Valeriy Chaly began the discussion about that “very dramatic day in our history.”

“It was a turning point of our history when hundreds of Ukrainian heroes stood firm in the middle of downtown Kyiv, the capital of Ukraine, fighting for freedom and dignity, fighting against criminals – I call them criminals because this was not people acting according to the law. And finally this hundred – as we call them, this Heavenly Hundred – were killed,” he said, adding, “They died, but they opened for Ukraine a completely different route forward.”

He pointed out that on this, the fourth anniversary of this historic event, the threats to Ukraine and its partners remain the same. “And that is why the struggle continues, and we bow our heads low before the Heavenly Hundred and all those who stood to defend freedom, democracy and human values.”

As Adrian Karmazyn of the U.S.-Ukraine Foundation pointed out in his remarks, the approximately 100 killed on the Maidan and the more than 10,000 killed in Vladimir Putin’s war on Ukraine, as well as the 7 million killed earlier in Stalin’s 1930s Famine-Genocide in Ukraine “are not just tragic statistics.” They are painful personal losses for their families, communities and the Ukrainian nation, he underscored.

“So, as we remember the Heavenly Hundred and the 10,000 people killed by Putin’s war in Ukraine, let’s honor them by not only citing the tragic statistics, but by thinking about each individual whose life was cut short. And by sharing their stories and the stories of their families, communities and nation wherever and whenever we can.”

And that is what the next two persons to address the commemorative event did.

Oleksandra Pavliuk, who came to the United States from Ivano-Frankivsk, spoke about the youngest of the Heavenly Hundred, Ivan Huryk, who was born in Ivano-Frankivsk in 1994. His great-grandfather and his brothers, who had fought in the Ukrainian Insurgent Army (UPA), were killed by Russian traitors when they were 19, the same age at which Ivan Huryk died, shot by a sniper on the Maidan.

The only speaker at the event to experience the Maidan personally was George Sajewych, a Ukrainian American who participated in that protest and came very close to joining the Heavenly Hundred. It was a motorcycle helmet that saved his life, he said.

“I remember standing, waiting for medical help, bleeding,” he said. And millions of people in Ukraine and elsewhere could see him via the Ukrainian television footage showing him sitting in the street, with his head, shirt and jacket covered with blood.

But, as he noted, that was early in the Maidan protests. During the mass killings on February 18-20, 2014, he was already in the hospital.

As for how the United States is reacting to Russia’s more recent events in Ukraine, Mr. Sajewych said there were some promises but no action. “When Russia invaded Crimea and then the Donbas we literally did next to nothing.”

“So this is where we come in,” he added. “We have to be more forceful, demand from our government, from our country, to make good on our promises.”

Another speaker, Nadia Shaparynska, representing the U.S. Ukrainian Activists, said that the Revolution of Dignity has a tremendous impact on the history of Ukraine. “It was the dawn to the better future, with the arrival of democracy, human rights and liberty.

Closing out the ceremony, Anastasia Rybytska, of Razom for Ukraine, said that after spending some time to find  adequate words to say about this historic event, she asked herself, “Why did they have to die, and why do they continue to die?”

And the only answer that she was able to find for this question was: “Those who have remained alive – and also we with them – we have the obligation to remain united, in peace and build our future.”

In addition to the event at the Lincoln Memorial, there was an annual charitable commemorative evening on February 23 at the Embassy of Ukraine in Washington “to benefit Ukraine’s soldiers, wounded warriors and their families,” with musical performances provided by the Gerdan duo and bandurist Olha Sokalska.