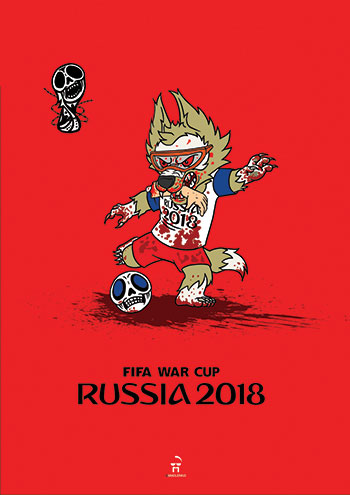 An alternative illustration by artist Andriy Yermolenko of the 2018 World Cup mascot Zabivaka (the one who scores), a wolf who is depicted with a blood-stained soccer jersey while kicking a ball with a skull on it and clenching a severed arm in his mouth.

KYIV – As World Cup host Russia was losing to Uruguay 0-3 in the quadrennial soccer tournament on June 25, Ukrainian filmmaker Oleg Sentsov was in the 43rd day of his hunger strike at a Siberian prison and 44 pounds lighter from when he first started refusing solid food.

Another political prisoner, Volodymyr Balukh, was in the 99th day of his, at first partial and subsequently full, hunger strike in a Crimean prison. The farmer had hung a Ukrainian flag atop his house in the Russia-annexed Ukrainian peninsula, according to human rights groups, and was charged with “insulting an official” for calling Russian police officers “occupiers.”

On that same day, artist Andriy Yermolenko released the latest poster in a series of illustrations on his Facebook page that portray World Cup host Russia as a belligerent state bent on torture and warmongering.

“When I saw Sentsov go on hunger strike… when the whole world was silent about Russia’s crimes, my conscience compelled me to start creating the [alternative World Cup] posters,” Mr. Yermolenko told The Ukrainian Weekly by phone in Lviv.

A devoted soccer fan, the Kyiv-born designer said that the soccer “championship doesn’t exist for me… but my conscience won’t to allow me to watch it taking place in a huge jail.” He compared Russia to having a “first floor with a grassy green lawn” on which to play soccer and a “basement with a prison where people are tortured.”

He covered sports for 12 years as a journalist, rising to become the chief editor of the ua-football.com website before moving on to the 24 TV channel that is owned by Lviv Mayor Andriy Sadovyi. Referring to the world’s most watched sporting event, Mr. Dovgan said: “Russia stole my dream, my hobby by hosting the World Cup.”

He also mentioned the 2015 corruption scandal at FIFA – the world’s global soccer governing body and organizer of the World Cup – in which 14 officials were indicted by the U.S. Federal Bureau of Investigation and Internal Revenue Service on charges of wire fraud, racketeering and money laundering.

“The World Cup isn’t interesting, it’s tainted, it’s corruption… all of them betrayed me, it’s repulsive to watch, and if I do, I may watch highlights and follow my favorite soccer players from Real Madrid [of Spain],” he said.

Asked whether this year’s soccer games can be compared to the 1936 Olympic Games that Nazi Germany held, Mr. Dovgan, a trained historian, commented that “people have a right to compare it to that.”

Yet back in 2010 when Russia was chosen to host this year’s tournament, “nobody knew that there was going to be a war and one shouldn’t compare different historic epochs, and as a [Ukrainian] citizen I know most likely that is the case… this is a justified comparison,” he continued. 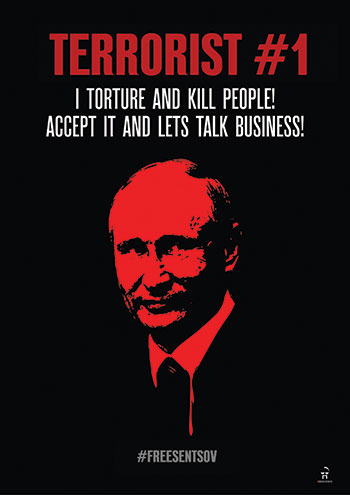 Artist Andriy Yermolenko started painting posters that called for the release of Ukrainian film director Oleh Sentsov who has been on hunger strike since May 14. In this image, the artist mocks the West’s weak response to Russian President Vladimir Putin’s belligerent attitude towards Ukraine and other countries.

FIFA has had a statute on human rights since April 2016, yet had refused to rescind its decision to have Russia host the premier soccer event.

On social media, backlash toward the competition has spawned hashtags on Twitter like #BloodyCup, #BoycottWorldCup 2018, and these have been augmented by existing trends that draw attention to some 70 Ukrainian political prisoners held in Russia or Moscow-occupied Crimea.

Users posting hashtags of #FreeSentsov, #SaveOlegSentsov and #LetMyPeopleGo have also criticized Russia’s hosting of the tournament.

One of them is Ukraine’s acting Health Minister Ulana Suprun, who often wears “Free Oleg Sentsov” T-shirts during public appearances in addition to tweeting with the hashtag of #BoycottWorldCup2018 regarding the imprisoned filmmaker.

Under normal circumstances, she told The Ukrainian Weekly that she would “watch the event if it was taking place in another country,” but said that Russia’s hosting of the World Cup is “an affront to Ukrainians and all those who uphold international rule of law.”

The Detroit native and trained radiologist added: “Raising this issue [Mr. Sentsov’s incarceration] during the World Cup helps to inform those who are watching the sports event to understand who [Russian President Vladimir] Putin really is and to realize that the Russian Federation is following in the footsteps of the Soviet Union in… torturing and wrongfully imprisoning those who are who are fighting for the freedom of their people.”

Television viewership data obtained by The Ukrainian Weekly suggest that the soccer event is enjoying higher ratings than the previous one held in Brazil four years earlier.

Anecdotal evidence suggests that many Ukrainians watch Russia games because they are rooting for Russia’s opponents.

Only 1.8 percent of households on average followed the 2014 World Cup in Brazil – the six-hour time difference may have been a factor.

TIC commercial director Vyacheslav Minevich explained the comparative data this way: “Unfortunately, TIC doesn’t do media analytics. The time zone difference with Brazil could be one of the reasons for lower ratings. The other reason could be that in 2014 some games were broadcast simultaneously on different channels; in this case it is more correct to summarize ratings of ‘parallel’ matches.”

For the love of soccer

Those who watch the World Cup games say they do it purely for the love of the sport.

He said that, in the first place, it’s up to FIFA to deprive Russia of hosting rights, having cited the soccer governing body’s human rights statute. “Of course, everybody knows that Putin’s Russia is a bloodthirsty regime and that it shouldn’t host the tournament,” he said.

Aside from escapism, other viewers follow the games for professional purposes, among them Olexiy Yatsin, a youth soccer coach.

“Football [soccer] shouldn’t be punished for political reasons… this is my job, I study the game and how the coaches approach each one strategically,” he told The Ukrainian Weekly on June 25 at the Big Ben sports bar in Kyiv. “If the legendary Dynamo Kyiv coach Valeriy Lobanovskyi were still alive today, he’d also be following the matches. We know Russia is the aggressor, everybody knows this.”

The staging of the tournament in Russia was not lost on imprisoned moviemaker Mr. Sentsov, who said he timed his hunger strike to fatally end at the start of the tournament – he has since received glucose injections to keep him alive.

On June 22, he released a letter through his lawyer thanking fellow film directors for their support three days before the competition’s kickoff.

“To all those who haven’t put on a [soccer] jersey, and not only,” the letter began. He voiced understanding that his colleagues “risked to openly support me at this time while living in this country” [Russia].

Mr. Sentsov finished the correspondence by remarking how Soviet movie directors helped bring an end to the Soviet empire during the Perestroika era of the late 1980s.

“Perhaps, you will have the same mission and task to destroy an even more ugly empire that is now built and continues to evolve in your country,” he wrote. “Good luck with this! But do not forget to make great films!”