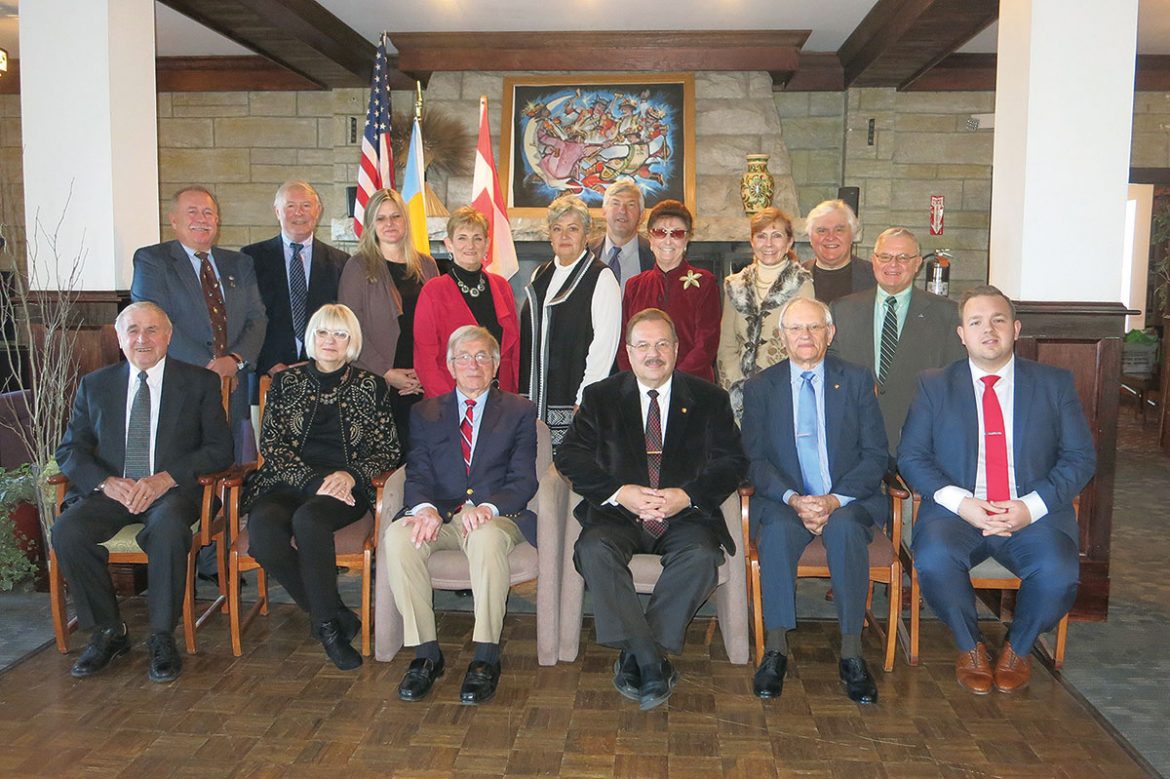 Members of the Ukrainian National Association’s General Assembly at the 2017 annual meeting at Soyuzivka Heritage Center.

KERHONKSON, N.Y. – The Ukrainian National Association’s General Assembly convened its 2017 annual meeting here at Soyuzivka Heritage Center on Friday and Saturday, November 17-18. It was the last meeting of the General Assembly elected for the 2014-2018 term before the 2018 convention of the UNA is convened in May.

The meeting’s business sessions were marked by good news about the UNA’s continued progress, as for the fifth straight year the fraternal organization has enjoyed net profits and its surplus has surpassed $10 million.

Reports on the UNA’s finances and activity were delivered by the full-time executive officers of the UNA, President Stefan Kaczaraj, National Secretary Yuriy Symczyk and Treasurer Roma Lisovich. All other General Assembly members – executive officers, advisors and auditors – as well as the editor-in-chief of the UNA’s official publications, Svoboda and The Ukrainian Weekly, had the opportunity to deliver addenda to their written reports.

The annual meeting began with the traditional opening ceremony during which the Canadian, Ukrainian and American national anthems were sung, as was the “Testament” (Zapovit) of Taras Shevchenko, whom the UNA reveres as it patron. A prayer for the success of the meeting and that of the UNA was offered by Mr. Groch; next came a moment of silence in honor of UNA activists who had passed away since the 2016 annual meeting.

Once the formalities of the meeting – the approval of the agenda, the acceptance of the minutes from the previous annual meeting and the calling of committees – had taken place, President Kaczaraj began the series of reports to the General Assembly, the UNA’s highest governing body between quadrennial conventions.

Mr. Kaczaraj underscored that the state of the UNA is strong as its surplus has been consistently going up for the past four years. This year, he said, the surplus grew by $850,000 as of September 30; it is anticipated that the surplus will grow by $1 million by December 31.

National Secretary Symczyk focused his report on his visits to UNA districts near and far, and his contacts with local UNA members. He noted that this year the UNA has visited more districts than in recent years – even those that were previously inactive. Community outreach, he said, is the key to growth in membership, and that is why the UNA has been sponsoring events, such as wellness seminars and community breakfasts, in various locales. Mr. Symczyk cited the “very positive responses we’ve received from communities visited” and the eagerness of people to become involved and sell UNA products.

Treasurer Lisovich stated that the UNA’s biggest accomplishment of the year was reaching $10 million in surplus. Other highlights of the “solid financial performance” noted by this executive officer were: five consecutive years of net profit of $1 million annually; total net admitted assets of $186 million; expenses that were below projections; and a strong investment portfolio.

The last report of the day was delivered by the editor-in-chief of the UNA’s two official publications, Roma Hadzewycz, who noted that while the number of subscribers to the print editions of both papers was down, the number of online subscribers is steadily growing, albeit significantly more so for The Ukrainian Weekly. On the Svoboda side, she cited more bylines from more diverse venues, for example, the Ukrainian communities in Portugal and Italy. “Our goal continues to be to get more news from diaspora communities worldwide in order to make Svoboda a global newspaper,” Ms. Hadzewycz said.

On Saturday morning, General Assembly members heard the report of the Auditing Committee, as delivered by Mr. Serba, who spoke on behalf of his absent colleagues Slavko Tysiak and Andrew Gavdanovich. In 2017, he said, the auditors examined the UNA’s employee benefits.

Afterwards, GA members also heard a presentation by Advisor Szul, a lawyer, who updated them on the corporate governance structure that is to be implemented by the UNA. He provided details on the General Assembly that, if the proposed by-laws changes are enacted, would be composed of a Corporate Board of Directors, Audit Committee and Fraternal Advisory Board.

The final sessions of the annual meeting were devoted to the reports of the Organizing/Fraternal, Publications and Financial committees, which had met during the course of the two days.

The Financial Committee (Ms. Lisovich, Messrs. Kaczaraj, Koziupa, Groch and Serba) reviewed the projected budget for 2018 and presented it to the General Assembly, which voted its approval.

The Publications Committee (Mmes. Lisovich, Horbaty, Puzyk, Lew and Hadzewycz, Messrs. Koziupa, Symczyk, Serba and Pishko) recommended ways to increase renewals of subscriptions and attract new subscribers to the UNA’s newspapers; proposed starting a Facebook page for Svoboda; and suggested hiring additional personnel to solicit advertisers for the newspapers. The committee also recommended that a standing committee on the UNA’s publications be formed to work year-round on the delineated tasks and recommendations.

The Organizing/Fraternal Committee this year included all the members of the General Assembly. Among other things, it recommended that: the upcoming UNA convention should include a training program for branch secretaries; the UNA’s online resource center be updated to allow communication among branches and sharing of information; the UNA Manual on Branches (an appendix to the UNA By-Laws) be updated to reflect current practices and needs; and that holiday cards be sent to Ukrainians serving in the armed forces.

After adjournment of the meeting, the UNA General Assembly enjoyed an elegant dinner prepared by chef Andrey Sonevytsky and staff.