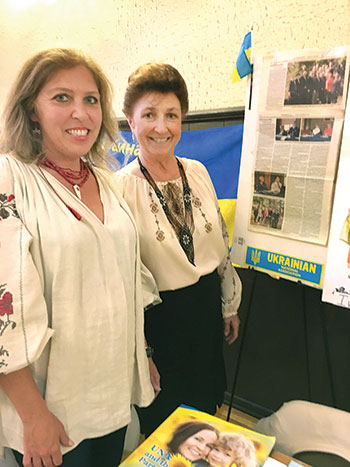 At the UNA information table during the Pysanka Festival in Los Angeles, (from left) are Zoryana Keske, secretary of John Hodiak Branch 257, and Luba Poniatyszyn-Keske, UNA adviser and Branch 257 president.

The festival draws many Ukrainians as well as non-Ukrainians from all over southern California. This year, approximately 800 people visited this six-hour long popular event, which featured local pysanka artists showing off their beautiful creations and conducting master classes in “writing” a pysanka to take home.

In addition, regional Ukrainian costumes were on display as were embroidered blouses and shirts; “vinky”(traditional headdresses), “rushnyky” (ritual cloths), tablecloths, ceramics, artwork and hand-made jewelry were available for purchase.

Some of the vendors donated a portion of their profits to Ukrainian orphanages and toward rehabilitation expenses for several Ukrainian soldiers currently undergoing treatment in Los Angeles.

Throughout the afternoon, the audience was entertained by the popular Chervona Kalyna Ukrainian Dance Company, which featured a children’s group and an adult group. There was also a beautiful bandura performance, plus accomplished singers – soloists and duos – of all ages, and toe-tapping music. Visitors were treated to these performances as they savored delicious Ukrainian food.

Zoryana Keske, secretary of Ukrainian National Association Branch 257, named in honor of John Hodiak, and Luba Poniatyszyn-Keske, UNA adviser and president of the branch, hosted a UNA table that provided information about the UNA, its two newspapers, Svoboda and The Ukrainian Weekly, and the Soyuzivka Heritage Center. In addition, UNA coloring books and miniature maps of Ukraine with historical information were handed out.