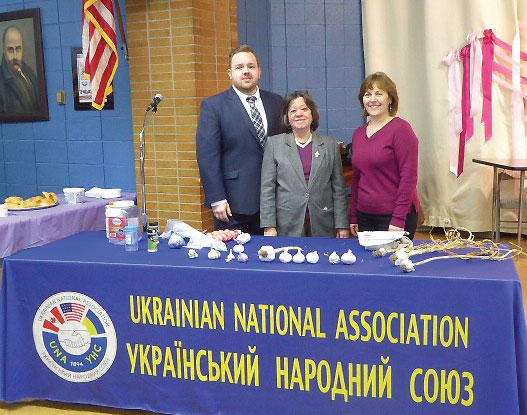 PASSAIC, N.J. – The New Jersey District of the Ukrainian National Association hosted a presentation by Roman Osadca titled “The World of Garlic” on Sunday, March 5, after liturgy at St. Nicholas Ukrainian Catholic Church in Passaic N.J.

This was the third in a series of fraternal events sponsored by the UNA that were tailored to provide local communities an opportunity to congregate and learn more about what the UNA has to offer as a fraternal benefit society.

Oksana Stanko, the district chairperson, welcomed the parishioners and introduced UNA National Secretary Yuriy Symczyk. Mr. Symczyk thanked the pastor, the Rev. Andriy Dudkewych, for his hospitality in allowing the UNA to host the event. He spoke about the benefits of membership in the UNA, inviting everyone to pick up the “Guide to Life,” UNA’s new publication, at the display table. He then introduced the guest speaker, Mr. Osadca. 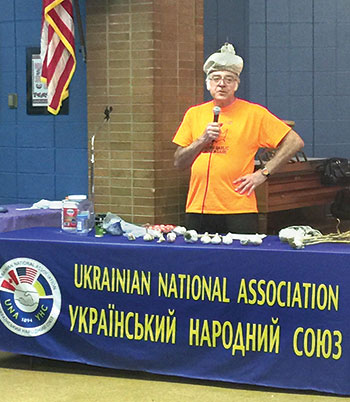 Roman Osadca promotes the many benefits of garlic to the parishioners of St. Nicholas Ukrainian Catholic Church.

Mr. Osadca delighted the audience with his vast knowledge about the history of garlic, the many types grown worldwide and its many benefits, including its medicinal value. A former pharmaceutical engineer, he has a lifelong interest in growing and collecting garlic and honey. Mr. Osadca and his wife own Valley Fall Farm in Johnsonburg, N.J. Along with his locally grown organic garlic, he brought with him his all-natural unfiltered honey products and his farm-fresh eggs, which were available for purchase. Mr. Osadca generously donated half of his sales that day to St. Nicholas Church.

Mr. Symczyk presented Father Dudkewych with a donation from the UNA after which a free drawing was held for all in attendance for the very popular Fitbit. Father Dudkewych picked the winning ticket, which turned out to be that of parishioner Irena Sywenkyj.

A good time was had by all who attended this informative session. Observers said it’s likely that more than one dinner that evening included some garlic in the recipe.