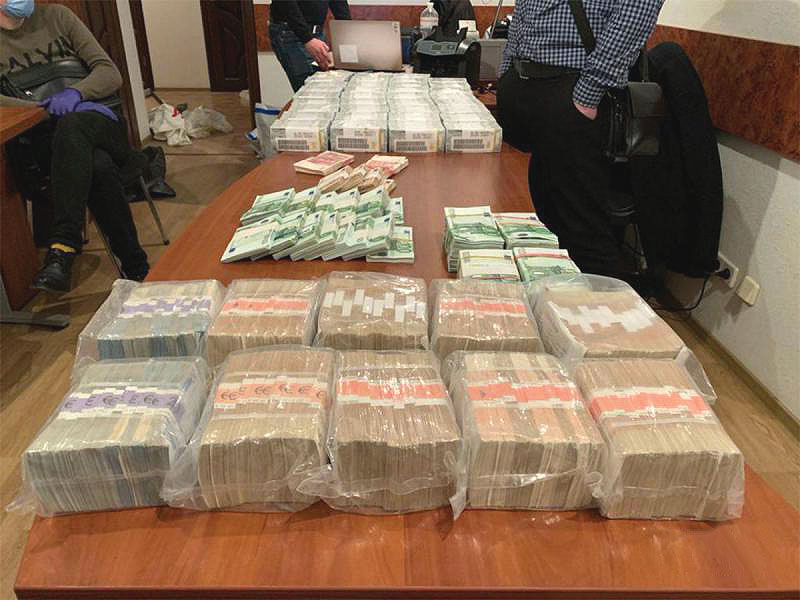 Hordes of cash in U.S. dollars, British pounds, euros and hryvnias were found in the premises of the brother of the chief justice of the Kyiv Circuit Administra­tive Court.

KYIV – Ukraine’s unruly justice system was laid bare this week when additional developments emerged in the anti-graft probes of three of the country’s most notorious judges.

The brother of Pavlo Vovk, who is the chief justice of the powerful Kyiv Circuit Administrative Court (OASK), was detained on April 6 while allegedly accepting a $100,000 bribe to secure a favorable ruling in the court.

Yuriy Zontov, whose surname Mr. Vovk shared before getting married, and another lawyer were charged the following day of enriching themselves via “illicit gain.”

Detectives from the National Anticorruption Bureau of Ukraine (NABU) later found $3.7 million, 840,000 euros, 20,000 British pounds, and 230,000 hrv in cash during searches of their premises, in addition to antiques and documents addressed to the OASK chief justice.

Ukraine’s Foreign Intelligence Service, where Mr. Zontov is employed, subsequently suspended him from service during the pre-trial investigation.

The two detained lawyers have stated through their lawyers that the money they had received was for “legal services.”

OASK chief justice Vovk denied being one of the intended recipients of the bribe. After searches were conducted in his chambers, Mr. Vovk spoke of constantly “living in an atmosphere of pressure from NABU” for six years, which is why “we have long been accustomed to provocations and violations on their part.” 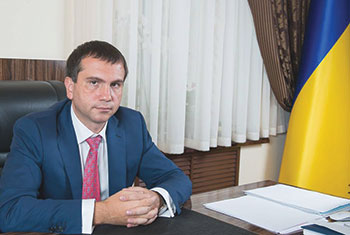 Mr. Vovk is under investigation for allegedly conspiring with 11 fellow judges to gain influence over other courts and government bodies “for purposes of blackmail, as political favors or for kickbacks,” according to the Financial Times. Mr. Vovk failed for the fourth time on March 9 to appear before the High Anti-Corruption Court for a bail hearing.

NABU is charging him and the other judges of attempting to “seize power.” The OASK core function is to hear appeals against government decisions.

Prosecutors are asking for a bail of 3 million hrv ($109,000). The High Council of Justice, which disciplines judges and where Mr. Vovk holds sway, hasn’t lifted his judicial immunity so he cannot be arrested.

He for a second time this month did not appear for a bail hearing at the Pechersk District Court in Kyiv on April 7. Mr. Tupytsky, whom President Volodymyr Zelenskyy has dismissed in a questionable executive order, is suspected of witness tampering and other criminal charges that include providing false testimony and fabrication of evidence.

The case is being investigated by the State Bureau of Investigations and stems from his service in a Donetsk court more than a decade ago relating to the privatization of an energy and mechanical plant in that region.

Prosecutors are seeking a bail of $1,636. They are also asking that he be banned from visiting the Constitutional Court, and that he be forced to wear a monitoring bracelet, surrender his passport and not leave the locality where he lives.

Mr. Tupytsky has denied wrongdoing and is also under investigation for not listing on his compulsory yearly asset declaration a luxurious property he owns in Russia-occupied Crimea.

Another Ukrainian judge accused of corruption this week was allegedly abducted in Moldova and brought back to Ukraine, the Moldovan Interior Affairs Ministry said on April 5.

Former Kyiv Dnipro District Judge Mykola Chaus is suspected of taking a $150,000 bribe in 2016 and fled the country that year before being detained in Moldova on March 1, 2017, where he unsuccessfully applied for political asylum. Moldovan authorities, likewise, haven’t honored Kyiv’s extradition request.

Through his lawyer, Iulian Balan, the former justice has claimed innocence of any crimes. The money he allegedly took was later found by investigators stuffed in two 3-liter jars buried in his garden.

Following his disappearance from Ukraine, Mr. Chaus was subsequently stripped by parliament of prosecutorial immunity and the High Council of Justice disrobed him in October 2017.

His current whereabouts are unknown and Moldovan authorities have said that one of his alleged abductors and one of the vehicles used in the operation were both detained. Police officials there have stated that the correspondence used by the judge’s kidnappers was conducted in Ukrainian.

The Ukrainian foreign affairs ministry, border control service, interior ministry, NABU and the Security Service of Ukraine have all not commented on the incident.

Smuggling and the work of customs officials are additional sectors rife with corruption that Ukrainian authorities have targeted.

On April 2, the National Security and Defense Council (NSDC) sanctioned the nation’s alleged top 10 smugglers by freezing their assets and property inside the country.

After signing off on the NSDC decision over the past weekend, Mr. Zelenskyy equated “contraband” with “economic terrorism” while saying that the illicit practice deprives state coffers of nearly $11 billion yearly.

About $3.6 billion of the losses are due to the “inefficient customs operations,” he added.
After the sanctions went into effect, the customs service announced that 100 officials, including 17 in managerial roles, had been fired.

Perhaps among the most prominent of the named smugglers is Vadim Alperin, whom the media often refer to as the “godfather of contraband.”

Based out of the Black Sea port city of Odesa, Mr. Alperin was detained on November 27, 2019, on suspicion of heading an organized group that illegally imported goods into the country. He also featured prominently in a far-ranging September 2013 journalistic investigation titled The Odessa Network that refers to him as an arms smuggler.

He was released under house arrest last year but then in May any limits on his freedom were removed, including a requirement that he wear a monitoring bracelet. He is also now allowed to see other suspects in his case.

Insisting that he is an honest businessman, Mr. Didukh has told local media that his attitude toward the criminal world is “don’t touch my past…everyone has a past.”

He has had a public spat with Svoboda, a nationalist political party which he has funded. In 2014, he demanded the party return to him $48 million that he allegedly gave it for its development. Svoboda denied having a connection to Mr. Didukh and has initiated lawsuits for slander against newspapers who have published the allegation.

An attempt on the businessman’s life was made at least once in 2012 when a sport utility vehicle in which he was riding was fired upon in downtown Lviv.