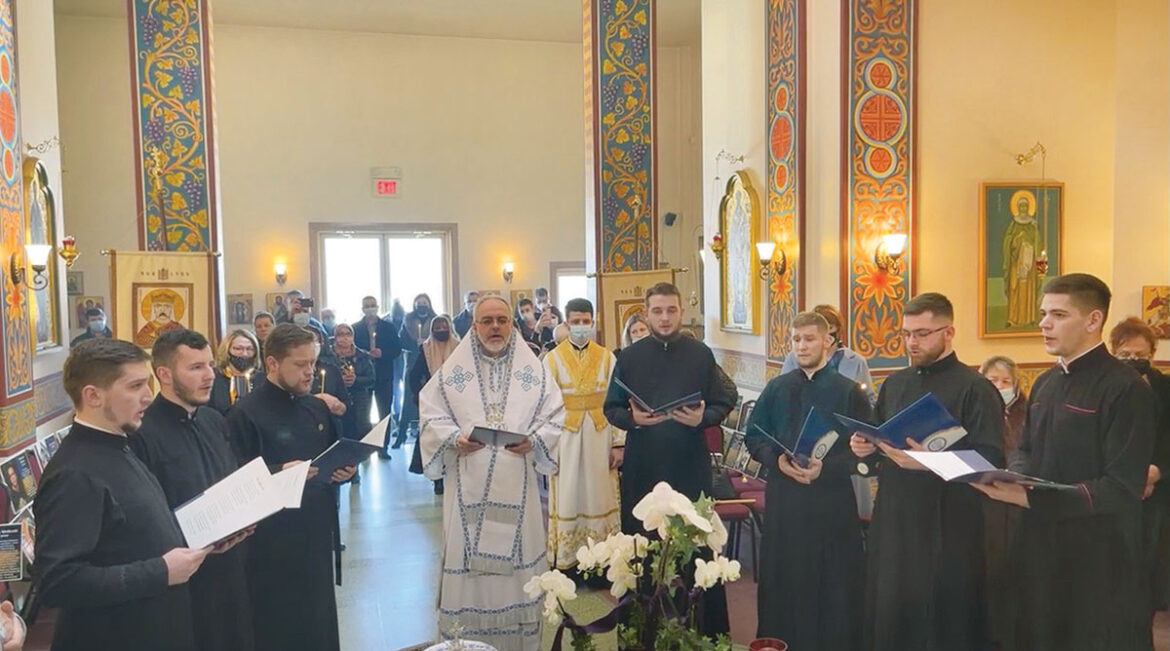 SOUTH BOUND BROOK, N.J. – A commemorative service (panakhyda) for the Heavenly Hundred was led by Archbishop Daniel of the Ukrainian Orthodox Church of the U.S.A. (UOC-U.S.A.) following divine liturgy on February 21 at St. Andrew Ukrainian Orthodox Memorial Church. The hierarch led prayers for the victims who were killed seven years ago while protesting on Independence Square in Kyiv in what became known as the Euro-Maidan or the Revolution of Dignity of 2013-2014. Seats in the church held small posters with the photo, name and description of each fallen hero, with a votive candle illuminating each victim’s face.

The archbishop noted that these individuals’ lives were cut short due to human greed, and a pharisaical outlook on life, underscoring the Gospel message for that Sunday of the Publican and the Pharisee. He encouraged the faithful to pray for these hundred souls, not just today, but throughout the year and let them remind individuals to be faithful to the truth and to uphold the dignity of humanity and the fight for freedom, not just in Ukraine, but worldwide.

The icon card of the Mother of God with the Heavenly Hundred.

Tears flowed freely as Archbishop Daniel, joined by the seminarians of St. Sophia Ukrainian Orthodox Theological Seminary, stood in the nave and began to sing “Plyve Katcha,” a song now synonymous with the Euro-Maidan. As he prayed for the souls of the departed, Archbishop Daniel read out each individual’s name, not only praying for them, but acknowledging appreciation for their ultimate sacrifice.

At the conclusion, Archbishop Daniel thanked all those who joined them in prayer, especially those who had joined via the livestream from all over the world, and he invited those present within the church to take one of the votive candles home with them, place it in their icon corner, and from time to time remember to pray for the souls of those who lost their lives in the fight for freedom. As people came forward for his blessing, Archbishop Daniel passed out little icon cards depicting the Mother of God with her veil spread over the Heavenly Hundred as a remembrance and a reminder to pray for the departed and that such a tragedy should never be repeated.

Archbishop Daniel stated: “Today we honor the memory of the young men and women who died on the Maidan. Some politicians say that perhaps their death on the Maidan was in vain, claiming that today there is no war in Ukraine, that this is a civil conflict between east and west. But we know that there is a war going on and we cannot keep silent about it. As long as politicians have been silent for the last seven years, so the deaths of these individuals have not yet been investigated.

“How can we look into the eyes of mothers and parents who lost their children on the Maidan? How can we explain to children why their father died? How to look in the face of fathers and children who go to Institutska Street, Independence Square to see photos of their relatives and say that their death was unworthy? We cannot forget that these hundred young people gave their lives for Ukraine and for us, the people who live in a free world. As they can no longer talk about it, as they don’t want to talk about it in Ukraine, we have an obligation in the Western world to talk about it. Why do Serbs have the right to say that thousands, millions of innocent people were killed in Kosovo? Why do Jews have the voice and power to talk about killing Jews? So why are we Ukrainians afraid to tell the truth about the murder of our children?!

“This has not happened during the Holodomor years. This is already our recent history of seven years ago. Some politicians say that we need to turn this page of history already. Never! This should be included in the pages of the history of Ukraine so that future generations will know about it and remember it. You need to have the strength and inspiration to challenge society and the world, for this is the truth that God demands. This is our sacred duty. This should be revisited year after year, day after day: eternal memory to the Heroes of the Heavenly Hundred.”

For additional information, readers can visit the UOC-U.S.A. website, www.uocofusa.org.