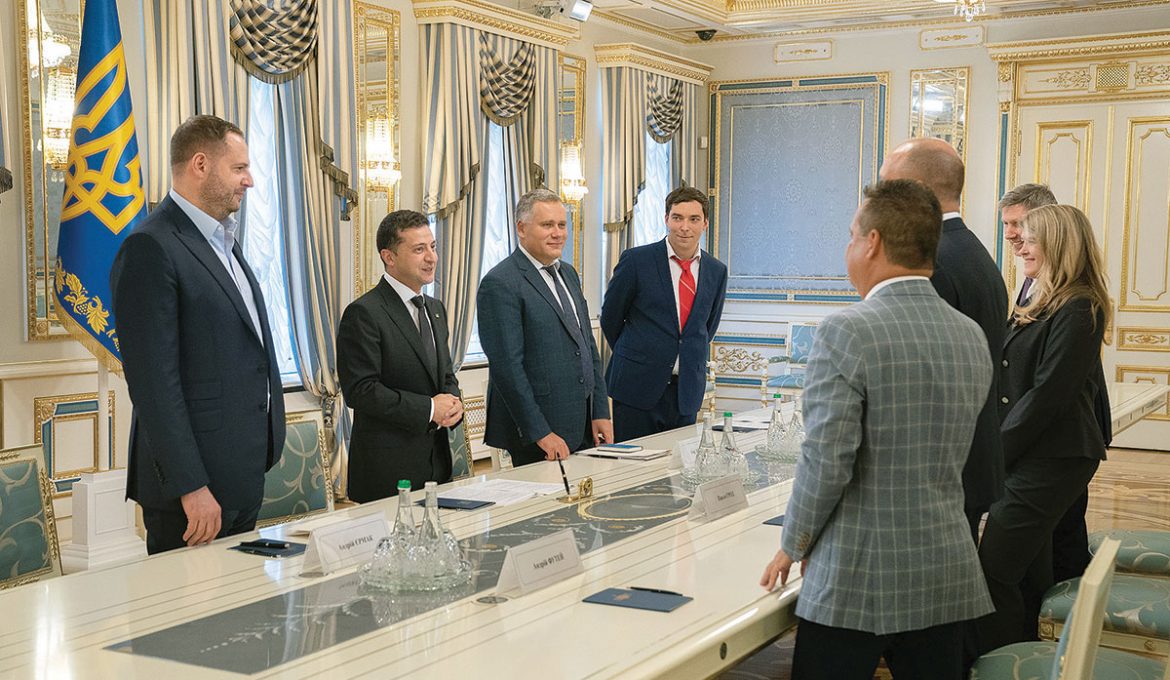 At the August 23 meeting between President Volodymyr Zelenskyy and his staff with a delegation of the Ukrainian World Congress led by President Paul Grod. Also part of the UWC delegation are Andriy Futey, UWC vice-president and Ukrainian American Congress Committee president; Lenna Koszarny, UWC vice-president and chair of the UWC Committee for Ukraine’s Economic Development and Investment; and Serhiy Kasyanchuk, director of the UWC Mission in Ukraine.

TORONTO – On the eve of Ukrainian Independence Day, the leadership of the Ukrainian World Congress (UWC) met in Kyiv with President Volodymyr Zelenskyy of Ukraine to discuss continued cooperation in defending the interests of Ukraine throughout the world, and further developing effective ties between the Ukrainian diaspora and Ukraine.

Key priorities were agreed upon during the August 23 meeting, as were the next steps in supporting Ukraine internationally, securing its economic development and growth in foreign investment, and improving Ukraine’s legislative framework to strengthen the cultural, social and political rights of Ukrainians abroad and support their return to Ukraine.

The parties agreed on joint actions related to the realization of the European and Euro-Atlantic aspirations of Ukraine, consolidation of the international coalition in combating Russian aggression, furthering of reforms in Ukraine, reinforcement of the positive image of Ukraine in the world, protection and support of the Ukrainian language in Ukraine and throughout the world, and furthering international recognition of the Holodomor as genocide of the Ukrainian people.

“The Ukrainian World Congress is grateful to the president of Ukraine, Volodymyr Zelenskyy, for his attention to strengthening cooperation between the diaspora and Ukraine, and promoting international recognition of the Holodomor as an act of genocide,” stated UWC President Paul Grod. “The UWC will continue to support Ukraine internationally in strengthening relations with NATO and the EU, securing Ukraine’s economic, cultural and informational global positioning, and combating security threats that include the weakening of international sanctions and completion of the Nord Stream 2 project.”

“There is currently a critical opportunity for improving the strategic partnership between Ukraine and the United States, and ensuring constructive dialogue between the presidents of the two countries,” noted UWC Vice-President and President of the Ukrainian Congress Committee of America Andriy Futey.