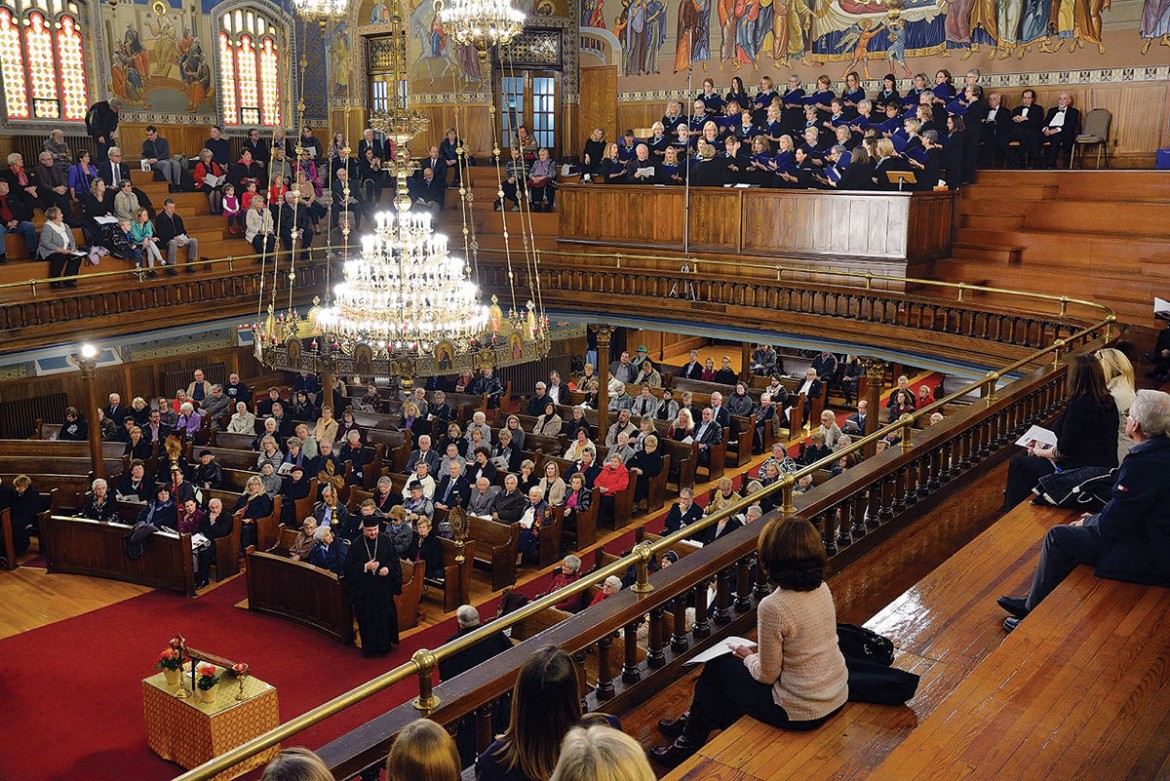 TORONTO – The Vesnivka Choir treated music lovers in the Ukrainian community and many others in the Canadian music community to a unique heavenly choral experience to commence its 50th anniversary season.

Vesnivka presented the world premiere of Roman Hurko’s Liturgy No. 4 conducted by Vesnivka’s founder, choral and artistic director Halyna Kvitka Kondracki on Sunday, October 18, at St. Nicholas Ukrainian Catholic Church in Toronto. This has been Vesnivka’s home base since it was founded as a girls’ choir at the parish’s associated Ukrainian School. The magnificent musical work was especially commissioned for the choir’s golden anniversary and newly written for its matured all-female voices. 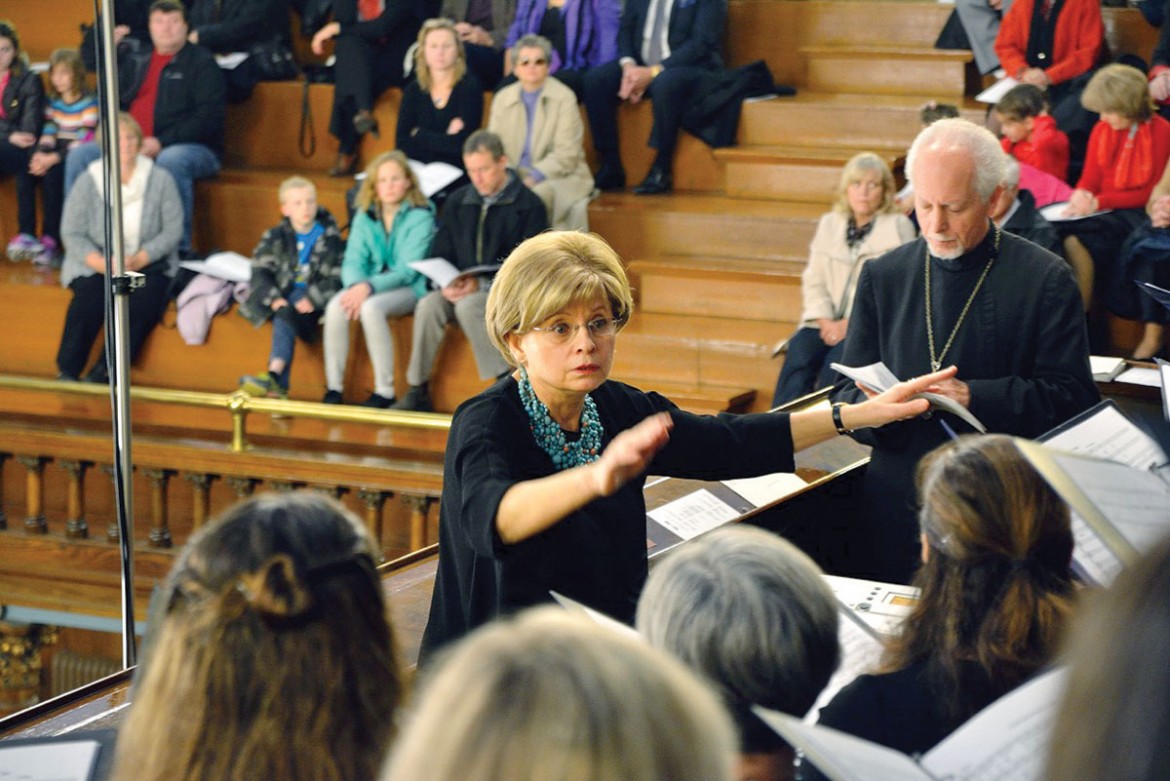 Present at the premiere was the composer. Mr. Hurko is a Canadian-American of Ukrainian heritage, born and raised in Toronto, whose childhood roots include attending St. Nicholas Church and later conducting its youth choir. Mr. Hurko, who started composing in high school, is a graduate of the University of Toronto and the Yale Institute of Sacred Music. He has been a member of the Composers’ Union of Ukraine since 2004.

This remarkable performance by Vesnivka foremost created a prayerful and solemn spiritual experience for some 500 attendees. A welcome address by St. Nicholas Church’s pastor, the Rev. Dr. Roman Lobay, invited listeners to avail themselves of the opportunity in time and space to gather mystically as the Body of Christ and meditate upon the sung liturgy.

The main excerpts of the liturgy were sung in concert format in Ukrainian, according to the text of the Divine Liturgy of St. John Chrysostom, the most celebrated Eucharistic liturgy in the Eastern Christian Catholic and Orthodox Churches of the Byzantine Rite. An English text translation was provided in a program.

The priest’s invocation for the choir’s responses and prayers was sung most spiritually by the Rev. Taras Dusanowskyj in a superbly resonating baritone voice. The soprano solo lines were sung with a bright and clear enlightening voice by choir member Lesia Komorowsky.

To round out and enrich the liturgy-in-concert, the Toronto Ukrainian Male Chamber Choir performed adeptly to provide a full dependable sound to join and complement Vesnivka in singing the closing prayers “Gentle Light” and “Ave Maria,” written earlier by Mr. Hurko.

The consistently high standard of musical choral performance by Vesnivka is well-known on many stages and in concert halls, both locally and internationally. Vesnivka’s impressive performance from high above in St. Nicholas Church choir loft generated no less a majestic sound with full-range dynamics and contrasts, producing rich tones, harmonies and keen intonation, all enhanced by the acoustics provided by the church nave’s high ceiling and wrap-around wood. 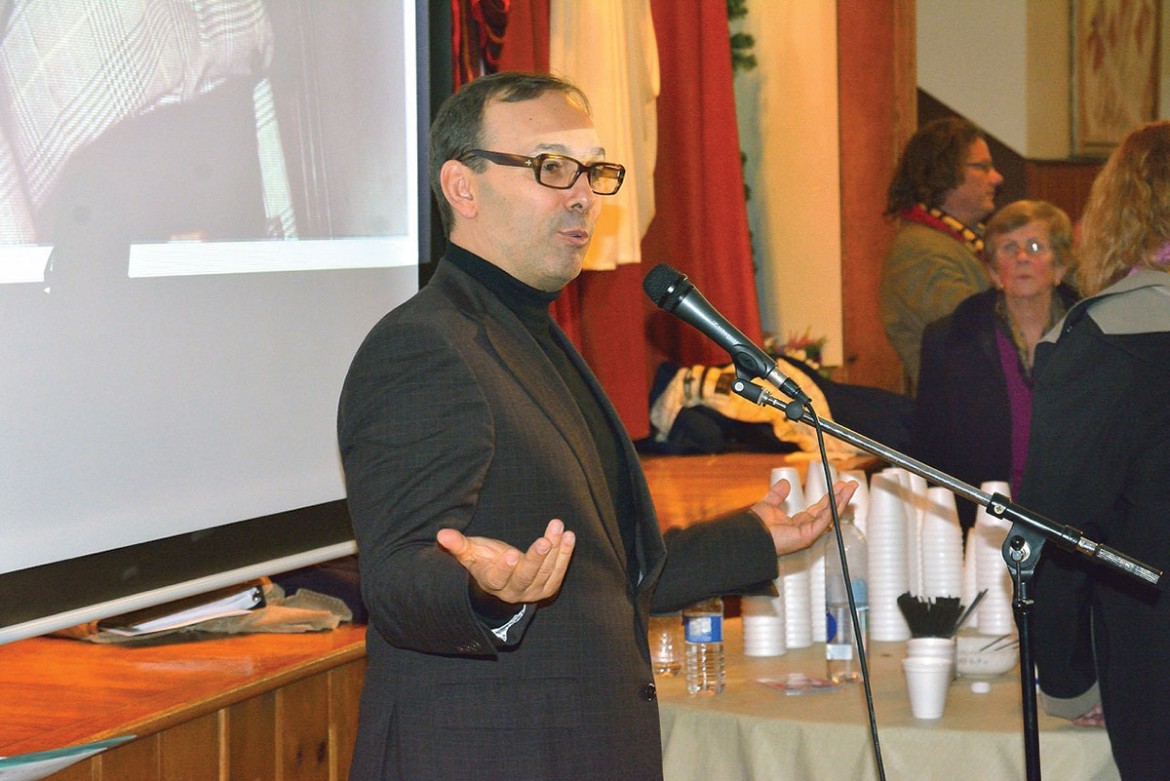 Composer Roman Hurko at the premiere.

To the audience listening below and on the balcony, surrounded by the church’s magnificent interior of religious paintings, icons and iconostasis, an angelic image of the choir was imprinted in the mind, reflective of “Vesnivka Choir” at St. Nicholas painted by William Kurelek in 1973.

A post-concert reception in the Church Hall welcomed all choir members, Vesnivka alumnae and the audience. A short program led by Vesnivka’s president, Irka Nabereznyj, included Ms. Kondracki being awarded a medal from the Ukrainian World Congress by board member Anna Kisil for “Outstanding contribution during the Year of Taras Shevchenko [2014] celebrating 200 years of his birth.”

In response to a tremendous welcome, Mr. Hurko said, “It is an honor to participate in Vesnivka’s 50th anniversary season” and thanked conductor Kvitka Kondracki and the Vesnivka Choir for such a moving performance.

“Many people came up to me afterwards and said that they had tears in their eyes – both men and women. This was due to your artistry and, even more so, due to the prayerful way in which you sang,” said Mr. Hurko.

He also thanked Sister Christine Dudych for her help in the computer transcription of the music, as well as making Mount Mary Spiritual Retreat Centre in Ancaster, Ontario, run by the Sister Servants of Mary Immaculate, available to Vesnivka for an intense weekend workshop to prepare for this premiere.

Finally, a hearty round of applause was given to the Vesnivka 50th Anniversary Committee chaired by Myroslawa Anna Diakun and comprising many Vesnivka members. Their dedicated hard work and months of planning gave people attending the reception event the opportunity to learn about Vesnivka’s history and accomplishments. Help from the men in the Chamber Choir and spouses of Vesnivka members was also greatly appreciated.

Numerous displays about Vesnivka’s past 50 years were presented, including concert dress outfits arranged by Lydia Cymbaluk, photo tableaux of many tours and competitions held in several countries and a 700-plus photo slideshow of the choir’s events and trips prepared by Nykola Parzei. There was an opportunity to purchase Vesnivka’s new 50th anniversary CD recording, decorations and chef aprons designed with Vesnivka’s logo.

Other 50th anniversary season concerts in Toronto include: a Christmas concert with special guests on Sunday, January 10, 2016, at 3 p.m., at Islington United Church, Etobicoke, Ontario, and a 50th anniversary gala concert with renowned guest artists Elmer Isler Singers (Lydia Adams, conductor) and Roman Borys, cellist of The Gryphon Trio, along with the Toronto Ukrainian Male Chamber Choir on Sunday, April 17, 2016, at 3 p.m., at Glenn Gould Studio, Toronto. For information, readers may call 416-246-9880 or 416-763-2197.

A version of this article was originally published in The New Pathway (Toronto).