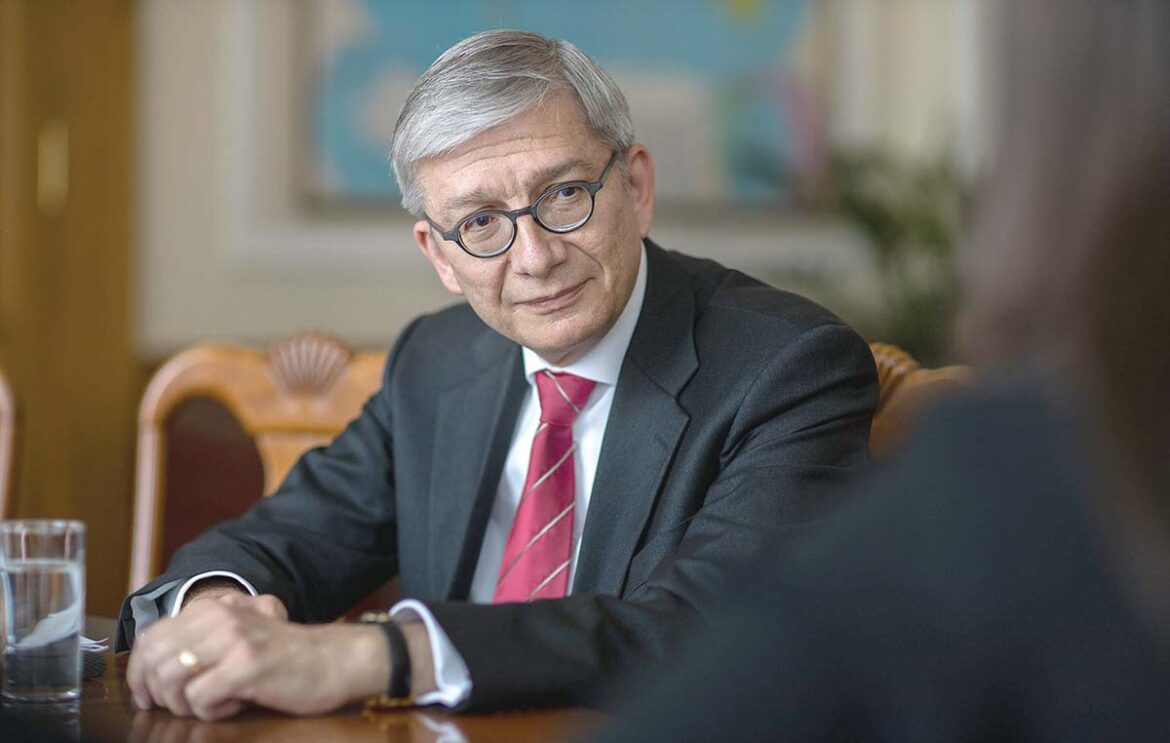 OTTAWA – Ukraine’s diplomatic presence in Canada has expanded with the appointment of Montreal corporate and commercial litigator Eugene Czolij, the former president of both the Ukrainian Canadian Congress (UCC) and the Ukrainian World Congress (UWC), as Ukraine’s first honorary consul in the French-speaking province of Quebec.

Since Montreal is in a COVID-19 red zone that prohibits travel outside Quebec, Mr. Czolij had to sign the joint agreement appointing him to his three-year renewable term position on an October 16 Zoom call with Andriy Shevchenko, Ukraine’s ambassador to Canada, who was in Ottawa.

Ambassador Shevchenko approached Mr. Czolij with the idea of his becoming the first official Ukrainian representative in Montreal after the longtime Ukrainian Canadian community activist served as head of the UWC’s International Observation Mission to Ukraine’s elections last year.

During the virtual ceremony when Ukraine’s Ambassador to Canada Andriy Shevchenko (right) officially signed the agreement with Eugene Czolij on his appointment as the honorary consul of Ukraine in Montreal.

For Mr. Czolij, a partner with one of Quebec’s major law firms, Lavery de Billy LLP, assuming the role of honorary consul in Montreal on a pro-bono basis complements the work he began last year – also on a voluntary basis – to head Ukraine-2050, a non-profit organization that sets hard targets over the next 30 years to advance Ukraine as a “fully independent, territorially integral, democratic, reformed and economically competitive European state,” according to its mission statement.

Ukraine-2050 has four objectives that include promoting the country’s membership in both the North Atlantic Treaty Organization (NATO) and the European Union (EU), along with achieving patriarchal status for both the Orthodox Church of Ukraine and the Ukrainian Greek-Catholic Church. Ukraine-2050 also aims to position Ukraine in the top 10 EU states by gross domestic product (GDP) and in the top 20 countries in the United Nations World Happiness Report.

Most of those goals will also figure in Mr. Czolij’s responsibilities as Ukraine’s honorary consul in Montreal.

In that job, however, he will be tasked with a bit more to do, which includes advocating for Ukraine’s territorial integrity and encouraging continued sanctions – including Canada’s three-year-old Magnitsky legislation – against Russia in light of its military aggression against Ukraine and to “pressure Russia to comply with its international obligations,” said Mr. Czolij in an interview. “That’s my first function.”

“My second one related to that is to defend the interests of Ukraine. My interpretation of that is to counter Russian disinformation regarding Ukraine, which is very powerful,” he explained.

His mandate extends to continue enhancing the commercial, economic, cultural and scientific relations between Ukraine and Quebec, which already have perhaps surprisingly close ties.

While the province’s Ukrainian Canadian population is dwarfed by numbers in nearby Ontario and western Canada, Quebec is the top trading partner with Ukraine for both the export and import of goods, according to Mr. Czolij.

“Quebec is normally not perceived to be the first province that you think of in terms of relations with Ukraine,” he said. “If one does not take into account the Maritimes, it is the province with the least Ukrainian population. But in terms of trade of goods, both export and import, Quebec is the number one province.”

Ukraine’s new honorary consul in Montreal said that Quebec accounts for about one-third of all trade in goods between Ukraine and Canada, and that bilateral exchange increased by nearly 6 percent last year when it totaled $105.4 million (about $80 million in U.S. dollars). Most of that was from Ukrainian exports to Canada worth $71.7 million (about $55 million U.S.); Canadian imports to Ukraine totaled $33.7 million (about $26 million U.S.)

The top Quebec export to Ukraine in 2019 was swine, valued at more than $11 million (about $8 million U.S.), followed by medicines, dog and cat food, and machinery used for mining.

It is also a province where he was born 61 years ago, studied law – in French – at the University of Montreal, and where he runs a busy practice involving cases of insolvency of major companies with international implications, creditors and debtors rights, corporate and commercial litigation, and class-action lawsuits.

Mr. Czolij, a father of three and grandfather of two, knows Quebec.

Given his 10 years at the helm of the UWC, six years as UCC president and as the current head of Ukraine-2050, he is also alive to the challenges facing Ukraine and has not been shy about sharing his views about them.

Just days before his appointment as honorary consul was announced, Mr. Czolij wrote an op-ed in which he called for urgent reforms in Ukraine to attract investments by, in part, implementing a “fair judicial system for all” and “fair competition without corruption,” along with mechanisms to both prevent “undue interference in businesses by law-enforcement agencies” and “corporate raids.”

As he wrote: “For more than 29 years, Ukrainian authorities have committed themselves to resolve these issues, but have always fallen short of their promises.”

Mr. Czolij, who supports the idea of dual citizenship in Ukraine, which both the UWC and Ukraine-2050 also promote, told The Ukrainian Weekly that he will continue to express his point of view.

“I obviously will not be doing that wearing my hat as honorary consul, but I don’t intend to stop advocating for issues that I think that are in the best interests of Ukraine,” he noted.

In that vein, Mr. Czolij sees his role as Ukraine-2050 president as complementary to his duties as honorary consul. The non-governmental organization – whose website, Ukraine-2050.org, includes sections in five languages: English, Ukrainian, French, German and Spanish – holds regular webinars, moderated by Mr. Czolij, which included a July session examining Ukraine’s “European integration” that featured members of the European Parliament.

The one major adjustment for Mr. Czolij with his new diplomatic duties – not to mention his work with Ukraine-2050 and his law firm – is the COVID-19 reality of little, if any, travel outside Montreal in the coming months as the pandemic’s second wave sweeps across Quebec and the rest of Canada.

“In my second term as president of the Ukrainian World Congress [from 2013 to 2018], I had 147 trips to 51 countries with about 1,500 bilateral and 200 community meetings. That essentially was about 30 international trips per year,” he said, noting that he also maintained his work as an attorney during that time. “It feels extremely strange for a guy like me not to be on a plane.”