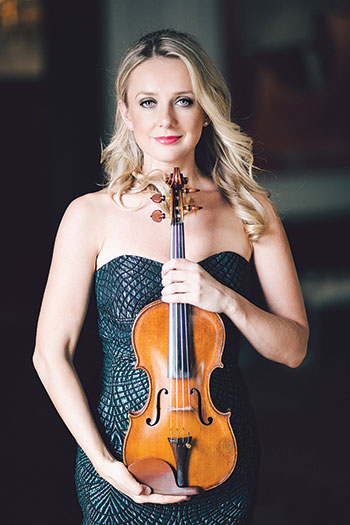 NEW HAVEN, Conn. – “I wanted to share Ukrainian music but with a different view. Most Ukrainian music of the 20th century is recorded by artists with a ‘Soviet bias,’ gravitating to heaviness with a ‘large expansive approach.’ Taking into account that I was born in Soviet Ukraine, performed concerts throughout a modern independent Ukraine, and was educated in America, I wanted to treat each composer personally and uniquely. All composers speak the same language – music, but each has a distinct dialect, an individual voice.”

These are the words of concert violinist Solomiya Ivakhiv about her new recording that was released internationally in February.

Last summer Dr. Ivakhiv, assistant professor of violin and viola and head of strings at the University of Connecticut, and her colleague, Juilliard-trained pianist Angelina Gadeliya, began recording pieces by eight Ukrainian composers whose works span the period 1919-2014 for a CD titled “Ukraine: Journey to Freedom, A Century of Classical Music for Violin and Piano.” The work chronicles various styles of 20th and 21st century classical music, from post-modern to neo-folklorist, by composers who emerged and thrived professionally, despite the obstacles they faced in composing their music in Soviet Ukraine.

Dr. Ivakhiv explained: “For me this was deeply personal as well as professional. I wanted to expose the journey of the featured Ukrainian composers, and offer them the opportunity to ‘speak’ in a way that wasn’t possible for them before. In so doing I wanted to raise awareness of Ukrainian music culture.”

Each of the composers on the album, which largely comprises previously unrecorded pieces, faced many obstacles in trying to maintain his artistic voice during times of harsh Soviet oppression. Forced to compose music that glorified the government above all, the artists featured in Dr. Ivakhiv’s recordings were denied the freedom to openly express their creative identities and clashed with government officials as a result.

One such composer, Borys Liatoshynsky, the father of Ukrainian symphonic music, paid a considerable price for following his own artistic vision rather than adhering to government restrictions imposed on composers in his time. Liatoshynsky was excluded from the Composers’ Union of the USSR and blacklisted from all concerts and radio programs. He wrote that he was “dead as a composer” for using his own characteristic musical style.

It is exactly this sort of silencing of artistic expression that Dr. Ivakhiv’s album aims to correct.

In addition to Liatoshynsky, the CD features the work of his students: Valentyn Silvestrov, arguably the most famous living Ukrainian composer, Yevhen Stankovych and Ivan Karabits. Also featured prominently are the works of Viktor Kosenko and Myroslav Skoryk, as well as those of younger voices, Oleksandr Shchetynsky and Bohdan Kryvopust.

Another unique aspect of the CD is that several of the pieces recorded are the result of close personal collaborations between Dr. Ivakhiv and living Ukrainian composers. For example, the Ukrainian Institute of America (UIA), under the leadership of its president, Dr. Daniel Swistel, commissioned a work by Yevhen Stankovych to commemorate the silver anniversary of the Music at the Institute (MATI) concert series, of which Dr. Ivakhiv is the artistic director. That is how “Angel’s Touch” made its way to Weill Recital Carnegie Hall, where it premiered in November 2013. Through her efforts and those of the composer, Lauren Keiser LLC published the work and the piece is now available through the largest sheet music distributor in North America, Hal Leonard. The piece is now widely available in music libraries throughout the U.S.

Another work premiered by Dr. Ivakhiv is young composer Bohdan Kryvopust’s “Capriccio,” first performed at Kyiv’s Composers’ Union Hall with the Kyiv Camerata. Oleksandr Shchetynsky’s masterpiece “An Episode in the Life of a Poet” premiered in Merkin Hall at the Kaufman Center in New York City in a concert by Dr. Ivakhiv and Dr. Gadeliya in December 2014 as part of the Taras Shevchenko bicentennial celebration.

Dr. Gadeliya, her piano accompanist, currently holds a faculty position at the University of Colorado in Colorado Springs. Having studied at Juilliard she, like Dr. Ivakhiv, holds a doctorate from Stony Brook University and has appeared as soloist with numerous orchestras and festivals including Tanglewood, Aspen, Banff, Philadelphia Chamber Music Society and the Emerson String Quartet’s Beethoven Project. She has premiered many works and has performed at Carnegie Hall, in Germany and Abu Dhabi, at Princeton and the Trinity Wall Street series. She and Dr. Ivakhiv, who joined forces in 2006, have played to critical acclaim in venues across the United States

The duo’s new CD was produced by Judith Sherman, who recorded it at the Academy of Arts and Letters in New York. In February Ms. Sherman received her fifth Grammy Award for Best Producer of the Year.

The Ukrainian Academy of Arts and Sciences in the U.S (UVAN), headed by its President, Dr. Albert Kipa, co-produced the CD, which was published by Labor Records. Naxos of America distributed “Ukraine – Journey to Freedom” to over 9,000 libraries, and the album is currently in the top six classical music albums on iTunes. It can also be purchased on Amazon. A promo video shot at the Ukrainian Institute of America in New York City can be found on YouTube (https://www.youtube.com/watch?v=3gl5Jw5Tiwk&feature=youtu.be).

Initial funding for the CD was obtained from a Dean’s Grant through the School of Fine Arts at the University of Connecticut. “Creative scholarship such as this project significantly enriches the entire research enterprise at the University of Connecticut,” noted UConn Vice-President for Research Dr. Jeff Seemann. “We’re thrilled to have the opportunity to support such outstanding artistic projects that benefit the community both within and beyond UConn.”

“I have a number of performances scheduled on campus and many of them include music of Ukrainian composers,” Dr. Ivakhiv stated enthusiastically. “On March 21 I will be joining with the artistic director of music performance at Columbia University, Polish-born pianist Magdalena Stern-Baczewska, in a recital at the world famous Jorgensen Center on the UConn campus. I am excited to play Beethoven’s ‘Kreutzer’ Sonata, Bartók’s ‘Romanian Dances,’ Franck’s Sonata in A Major and Ivan Karabits’s ‘Musician’ from my recent CD.”

Dr. Baczewska has enjoyed a multi-faceted career as a pianist, harpsichordist, educator, recording artist, producer and administrator. A laureate of international piano competitions, she recently toured Europe performing Bach’s “Goldberg Variations” on the piano and the harpsichord. Her best-selling album, “Music for Dreams” was conceived with BlueSleep, a medical team specialized in research and treatment of sleep disorders. Dr. Baczewska has given piano master classes in China, Mongolia, Europe and the United States.

On April 1 the University of Connecticut Chamber Orchestra, professor of conducting Harvey Felder, professor of cello Rebecca Patterson, pianist Melvin Chen from Yale and Dr. Ivakhiv will present a benefit concert for the Benton Museum at UConn. The event is being planned with Benton’s director, Nancy Stula, and Philadelphia-based artist Katia Setzer, who will showcase her works. The concert will be repeated the following day as part of the MATI program at the UIA and will feature the music of Mendelssohn, Dvořák, Stamitz and Ivan Karabits.

In the fall, Dr. Ivakhiv will solo with the University of Connecticut Wind Ensemble and present a concerto by Kyiv-based composer Oleh Bezborodko in Storrs.

“Besides bringing Ukrainian music to Connecticut, I will be taking American music to Ukraine,” Dr. Ivakhiv added. On June 19, she will be featured with the Kyiv Camerata at Lysenko Colonnaded Hall and will premiere in Ukraine “American Rhapsody” by Kenneth Fuchs, who is a professor of composition at the University of Connecticut. “I am very excited about this opportunity to bridge two cultures and share the music that each country has to offer,”  Dr. Ivakhiv said.