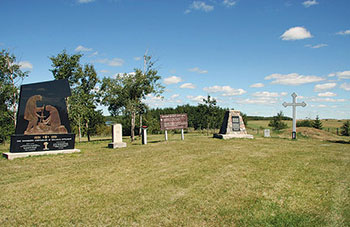 If it hadn’t been for Henry Kostiuk, we would have still been roving the tree-lined gravel roads around Olha, Manitoba.

For a day trip, my husband, Myroslaw, and I decided to visit Olha, where there is a mass grave and monument to over 40 Ukrainian children and three adults who succumbed to scarlet fever just after arriving on the Canadian prairies. This is a Manitoba Municipal Heritage Site (No. 45). We knew we were going in the correct direction when the road sign at one intersection read “Olha Road/Shevchenko Street.” Again, perfectly normal for the Canadian Prairies.

The provincial website describes the site located in the Oakburn area, rural municipality of Rossburn:

“The Ukrainian Pioneer Mass Grave Site is a tangible link to the struggle, devastation and loss experienced by newly arrived Ukrainian immigrants in the Vista area in 1899.

“After enduring an arduous journey to escape persecution in the Ukraine and to seek a better life, a group of immigrants temporarily camped at this location (pending the allocation of homesteads) suffered an outbreak of scarlet fever that took the lives of over 40 children and three adults. They were buried en masse as the frozen ground made individual burial too difficult.

“About 50 years later the remains were removed to the present location, approximately 100 meters north of the original burial site. The gravesite, a unique example of a pioneer mass burial in Manitoba, is now a place of mourning, pride, gratitude and celebration for surviving Ukrainian pioneers and their descendants. This continued importance is demonstrated by various monuments erected in association with significant events and by regular use of the site to celebrate Ukrainian settlement in Canada.”

On our four-hour drive northwest of Winnipeg, I again experienced the expanse of the prairies, and their flatness. As far as the eye can see, we, the road and the fields are about a few inches along the bottom of the landscape. The rest, from tire to tire, from foot to foot, is all sky! Think of William Kurelek’s paintings of the prairies. Add to this the tilled and seeded blacker-than-black earth fields all around.

On this sunny Manitoba morning we headed in the general direction of Riding Mountain National Park, with Dauphin (of Canada’s National Ukrainian Festival fame) on the other side of the park, but turned west instead of north. With songs by Kvitka and Sofiya Fedyna filling the car, we were going back in time.

On the way back, we stopped at the Holy Eucharist Ukrainian Catholic Church in Oakburn, a newer brick building. The adjacent cemetery is filled with crosses and monuments from the early years to the present. The Orthodox cemetery is across the road. The familiar Ukrainian names on the monuments show how many families, how many generations have put down roots in this new land.

Add to this the many small village Ukrainian churches with their pear-shaped domes, dzvinytsi (bell towers) and nearby cemeteries, with the pale yellow ripening wheat and cloudless blue sky – and you have to stop and think about where you are.