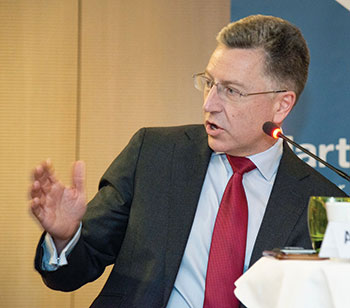 U.S. Mission to the EU

KYIV – The United States and the European Union are considering a separate set of sanctions and other measures against Russia for firing on Ukrainian vessels and taking 24 servicemen captive in the Black Sea on November 25.

The debate is whether to add them to an existing set of restrictive measures over Russia’s annexation of Crimea and its war in the Donbas or to devise a “third basket,” Kurt Volker, special representative for Ukraine negotiations, said in a telephonic news briefing on December 17 in which The Ukrainian Weekly participated.

“But the notion that there needs to be a response and [that] some additional sanctions and listing of names would occur seems to be one gaining some traction, and I would not be surprised at all to see that happen in the next month or two,” he explained.

Additionally, Ambassador Volker said a “multinational visible presence in and around Ukraine, whether it’s in the Black Sea or in parts of Ukraine,” could be an additional step taken in the future.

He called on Russia to release the 22 sailors and two Security Service officers who were detained and subsequently taken to Moscow to face civil charges of trespassing. Mr. Volker voiced concern that they are not being treated as prisoners of war. Therefore, he pulled his offer to visit Moscow after the Russian naval attack in the Black Sea.

“Over the summer and early autumn, I exchanged some correspondence with my Russian counterpart to see if they were anywhere closer to being willing to come to an agreement [on peace],” Mr. Volker said. “The answer is no, they’re not. Likewise, I’m not in a position then to go to Moscow for these Minsk [peace agreement] purposes at a time when Russia is now holding these Ukrainian sailors.”

The State Department’s point man on the Donbas war also confirmed that Russia has an invasion force at Ukraine’s borders and that it’s bigger than the one Kyiv faced at the outset of war in 2014.

Regarding Russia’s military build-up, he said, “Yes, that is all true.”

Ambassador Volker continued: “This is something that has happened over a period of years. Russia invaded Ukraine, it took Crimea, it is occupying the Donbas, and it has, within Russia, built up significant military capacity, and also in Crimea [it has] built up significant military capacity over time. So it is much larger than was there before all the conflict started.”

Regarding the war in the easternmost Luhansk and Donetsk regions, one that Mr. Volker has described as a “hot conflict” in previous statements, he said there still is “violence occurring every night… there’s mortar and sniper fire, artillery… so this just has to stop.”

He noted that the likelihood of a future prisoner swap, even before the New Year, appears dim.

“Russia, at the moment, is not interested in prisoner exchanges,” Mr. Volker said. “I think that even holding these sailors, which are even outside of that framework… and I think this is a desire of Russia to try to use them as hostages or pawns in putting political pressure on the government in Kyiv.”

Meanwhile, the United Nations General Assembly the following day passed a resolution put forth by Ukraine that called on Russia to withdraw its military forces from Crimea and stop occupying Ukraine’s territory. Passed with a two-thirds majority, the resolution rejected a clause that would have led to an investigation of the November 25 Russian naval attack on three Ukrainian vessels. It also expressed concern over Russia’s “increased militarization” in the region, including on the Crimean peninsula, along Ukraine’s borders and the Black and Azov seas.

In the end, Ambassador Volker repeated America’s interests to “see peace restored for the people of Ukraine in the Donbas and around, and it’s unfortunate that we now find ourselves yet again at a point of possible escalation.”