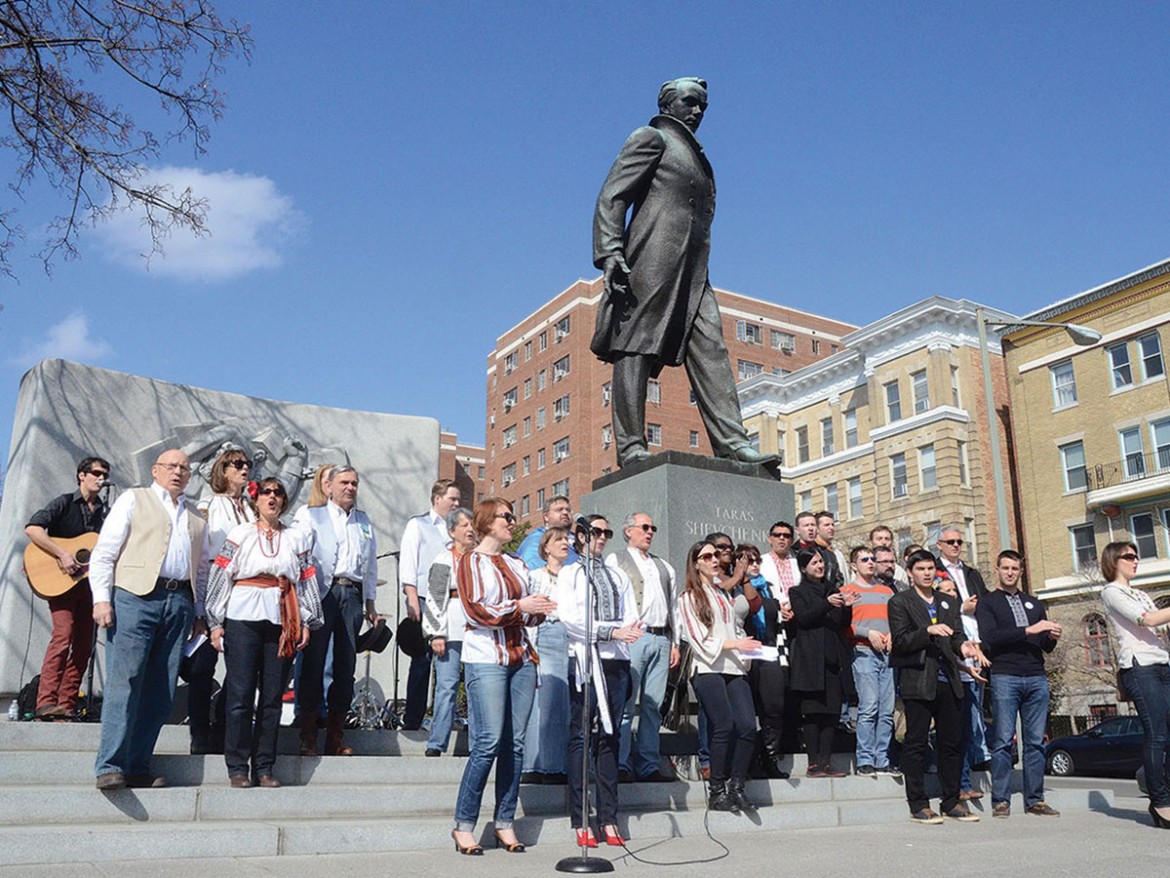 All the speakers and singers join in the singing of the Ukrainian national anthem at the conclusion of the commemoration of Taras Shevchenko in Washington.

WASHINGTON – As Ukrainians, and others, began arriving at the Taras Shevchenko monument here on the sunny afternoon of Saturday, March 21, they were taken aback at the first sight of the poet laureate’s statue. It was draped with a gigantic faux chain, from around his neck, surrounding his body and down to his feet.

The gathering grew to a crowd of almost 200 when the memorial program – a “cultural exploration into an iconic Ukrainian figure,” its “prophet of freedom” – began with everyone joining with the local SPIV-Zhyttya choir in singing the American and Ukrainian national anthems. 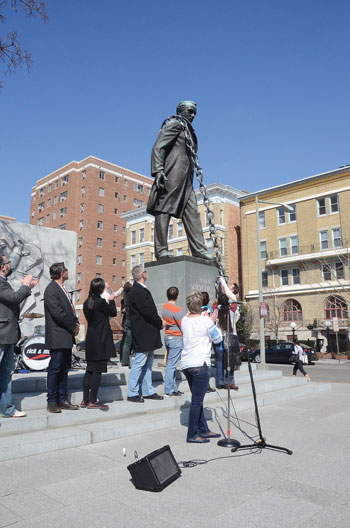 Taras Shevchenko being unchained after the recitation of his “Testament.”

More recitations of Shevchenko’s poetry – in Ukrainian, English, as well as in Georgian, Russian, Belarusian, French and Spanish – continued throughout the program. And so did the singing of some well-known songs set to his words, as well as two recent compositions to Shevchenko’s poems by Victor Morozov: “I Beat a Path through the Field” (Утоптала стежичку) and “The Rapids Roar” (Б’ють пороги), which were performed by SPIV-Zhyttya.

Also performing at the event were Rick and MC, a visiting popular duo from Philadelphia.

Among those addressing the gathering were George Barros, who spoke about Shevchenko the artist, poet and prophet of freedom, and Candi Darley, born in Panama and now living in the United States, who focused on Shevchenko’s relationship with Ira Aldridge, an African American who pursued his professional stage acting career in Europe and developed a close and lasting friendship with the Ukrainian poet while performing in Russia.

Representing the Embassy of Ukraine, one of the co-sponsors of the event, was Oresta Starak, the Embassy’s liaison with the Ukrainian community, who recited Shevchenko’s “Testament” (Заповіт). Moderating the event were Lada Pastushak and Oksana Lassowsky.

To the cheers of the crowd, the Shevchenko statue was unchained before the final singing of the Ukrainian national anthem, and parts of the broken faux chain – fabricated by the Washington area’s Plast boy scouts – were readily dispersed.

Then everybody was invited to continue the celebration at the Bier Baron, a historic saloon and restaurant across the street from the Shevchenko monument.