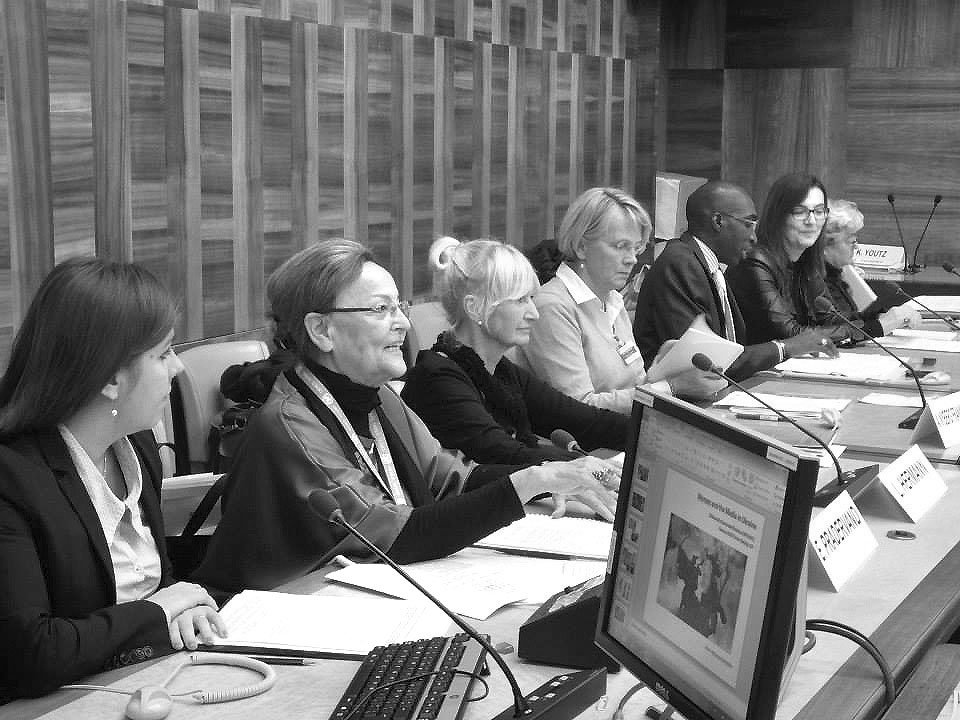 Oleksandra Kunovska-Mondoux (first from left), WFUWO representative at the U.N. in Geneva, with other participants of the conference held to assess progress in areas of concern to women.

GENEVA – The United Nations NGO Committee on the Status of Women (CSW) in Geneva organized and hosted an NGO Forum on November 3-5 that immediately preceded the United Nations Economic Commission of Europe (UN ECE) conference November 6-7. On the agenda for the UN ECE was the review of the implementation of the Beijing Platform for Action 1995 at its 20-year mark (2015).

Close to 700 representatives of 350 non-governmental organizations from 56 countries of the UN ECE region convened for the NGO Forum to assess progress made in implementing the promises made to the women of the world at Beijing and to make recommendations for the future. Ukraine, and many of the countries that are home to the Ukrainian diaspora (North America, Western Europe, Eastern Europe and Central Asia) are included in the region embraced by the UN ECE. The World Federation of Ukrainian Women’s Organizations (WFUWO) was among the forum’s participants.

The NGO Forum program of November 3-5 focused on the points of the Beijing Platform that focus on women. Sixteen thematic roundtables were arranged that corresponded to the Beijing Platform’s 12 critical areas of concern for women (Poverty; Education and Training; Health; Violence against Women; Women and Armed Conflict; Economy; Power and Decision-Making; Advancement of Women; Human Rights of Women; Women and the Media; Women and the Environment; The Girl Child) and four emerging issues (Human Rights and Migrant Women; Science, Technology and Innovation for the Advancement of Women; Older Women and Men; Boys for Gender Equality).

Participants in the roundtables from Ukraine and the Ukrainian diaspora included Natalia Karbowska of the Ukrainian Women’s Fund in Kyiv and Kateryna Levchenko of La Strada-Ukraine, who spoke to the themes of women in power and decision-making, and women and armed conflict. Oleksandra Kunovska Mondoux, the WFUWO’s main representative to the U.N. in Geneva, addressed the topic of women and the media.

From the Independent Life Assistance Center for People with Disabilities, Meliya Assanova, representing those living with disabilities in Crimea, spoke at the roundtable “Women’s Rights: A Power to Create Change” during the first day of the NGO Forum. Larysa Kobelianska, who serves as the advisor on gender issues to Ukraine’s Minister of Social Policy Liudmila Denisova, also participated in the forum.

Ms. Mondoux provided an overview of the situation of women and the media in Ukraine during the past 20 years. Among her points were that “images of women in the media were the subject of much attention by NGOs, and international and educational institutions after 1991, and especially after 2004 when civil society organizations focusing on women’s rights flourished in Ukraine.”

“It is interesting to note that the Ukrainian group Femen, whose members protested topless with a lot of attention in the international media, played an invisible role in Ukraine and was not taken seriously for many reasons, most importantly because there are many other Ukrainian women’s groups working through perhaps more ‘boring means’ for gender equality, such as the Women’s Information Consultation Center, the Ukrainian Women’s Fund, La Strada-Ukraine,” Ms. Mondoux noted.

However, she asserted that “this recent crisis has demonstrated that there is an active citizens’ position and volunteerism in Ukraine, one that is ready to battle half-truths through new technologies. A new generation of civic activists, led by women, is using powerful global social networks to support the people of Ukraine. Social networks such as Facebook or Twitter gathered and shared information, provided evidence, coordinated efforts and mobilized supporters. The Facebook pages of Euro-Maidan, Razom for Ukraine, Half of the Maidan: Women’s Voice of Protest proved the high participation of Ukrainian women activists worldwide. Ukraine’s National Report of April 2014, however, makes no mention of this and provides no gender-based statistics on the use of new social media in Ukraine today.”

Furthermore, Ms. Mondoux stated that “the difficulties in implementing the Beijing Platform for Action lie in the lack of effective legislation. The law of Ukraine adopted in 2005 ensures equal rights and opportunities for both women and men, including equal media access. The state programs outlined for the periods to 2010 and now to 2016 include the need to raise awareness of gender discrimination in the media, but many state institutions fail to address this concretely and remain unresponsive to gender stereotyping in the media.”

She continued: “According to the National Report of April 2014, media coverage frequently reveals the incompetence of Ukraine’s journalists on gender issues. The simple monitoring of media content, for example of sexism in advertising, is alone insufficient if gender equality is not a true priority of government.”

At the conclusion of her talk, Ms. Mondoux offered a list of recommendations for improving the situation of women in the media.

The Geneva NGO Forum on Beijing +20 UN ECE Review published its Declaration and Recommendations on November 5 with the motto “Every Woman, Every Right, Every Minute: Everyone is Responsible and the Time is Now” (http://beijing20.ngocsw-geneva.ch/)

The UN ECE Beijing +20 Regional Review began on November 6, after the conclusion of the NGO Forum, and Ukraine’s governmental delegation included Minister of Social Policy Denisova. On November 7 she spoke frankly during her presentation about the conflict in Ukraine, as well as the current Ukrainian government’s commitment to gender equality.

Ms. Denisova confirmed that Ukraine’s current state policies are dedicated to the creation of a legal, social and political foundation for the fullest realization of the potential of women and men in all spheres of employment, community and personal life, and to the eradication of all forms of gender discrimination. Ms. Denisova reminded her audience of Ukraine’s recent endorsement on July 11 of a series of European Union declarations that pertain to the question of achieving gender equality in Europe.

Minister Denisova made a special point of describing Ukraine’s current challenges, especially as they relate to safeguarding Ukraine’s most vulnerable citizens, women and children, many of whom are suffering from complex life circumstances in the conflict zones of the country’s southeast territories controlled by illegally armed groups. She made note of the internally displaced persons, including those from the occupied territory of Crimea.

One result of the violence inflicted upon Ukraine by Russia’s invasion of Crimea and the occupation of eastern regions is the ever-increasing problem of displaced persons. Recent estimates by the Internal Displacement Monitoring Center (IDMC, founded in 1998 as part of the Norwegian Refugee Council, an independent non-governmental humanitarian organization) puts the number of internally displaced persons (IDPs) in Ukraine at over 430,000 as of October (http://www.internal-displacement.org/europe-the-caucasus-and-central-asia/ukraine/figures-analysis).

The dire situation in Ukraine evoked sympathetic references from Nyaradzayi Gumbonzvanda, president of the NGO CSW Geneva, and Phumzile Mlambo-Ngcuka, undersecretary general and executive director of U.N. Women, as well as overt support from the participants of the conference.