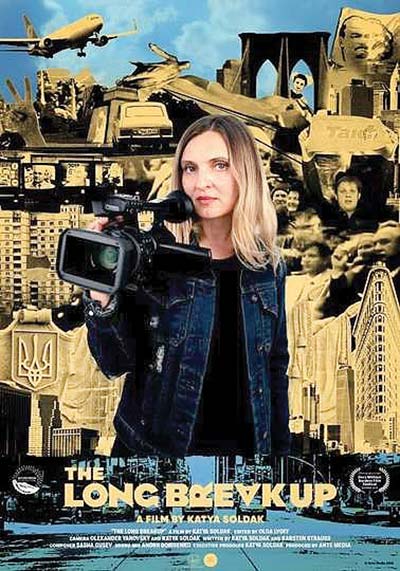 Courtesy of the Ukrainian National Museum

A promotional poster for the documentary “The Long Breakup.”

CHICAGO – Can a Russian-speaking, Soviet-raised, Kharkiv-born woman, who spent her childhood summers in Russia singing Russian folk songs with her Russian grandmother, be Ukrainian? For Forbes journalist and editorial director Katya Soldak, it took a decade of soul-searching travel between Brooklyn and Kharkiv to answer that question.

This past summer, the Ukrainian National Museum hosted its first live event in over a year, during which Ms. Soldak shared her intimate journey in her feature-length documentary “The Long Breakup” with 50 viewers.

The film’s press kit says that the documentary examines “Ukraine’s struggle to escape Russia’s embrace, leave its Soviet past behind and become a truly independent nation.”

However, her mesmerized viewers of the documentary, many of whom immigrated from all over Ukraine (Lviv, Kyiv, Poltava and even Kharkiv), understood from the very first frame that the film is about so much more. “The Long Breakup” passionately, honestly and suspensefully chronicles how a woman of mixed ethnicity became a truly independent spirit and forged her own identity.

Despite an unwavering dedication to Ukrainian culture and language, many people in the Ukrainian diaspora in America are not conflicted about their identity as U.S. citizens. Some may find it difficult to understand why a Ukrainian citizen with a Russian grandmother would be so conflicted about her identity. Understanding requires stepping into the shoes of a teenage girl immersed in Soviet propaganda and culture that characterizes all things Ukrainian as “low-brow” and provincial, and all things Russian as strong and sophisticated.

After the Soviet Union collapsed in 1991, Ms. Soldak was a college graduate working in Kharkiv media outlets while obsessively following the American rock music scene. She had high hope that this new openness toward the West would change everything. However, when the local wars between oligarchs endangered and disillusioned her, Ms. Soldak joined her father in Brooklyn. She earned her Master’s degree at Columbia University School of Journalism and quickly integrated into a cozy American lifestyle. Nevertheless, something drew her to her roots, making her unwilling to cut ties with her native Ukraine, especially when it came to politics.

During the 2004 elections between Viktor Yuschenko and Viktor Yanukovych, Ukrainians were torn between a more European life and Russia-backed stability. Driven by the promise of Western culture and creative freedom, many of Ms. Soldak’s friends were inspired to vote for Mr. Yuschenko and even took to the streets during the Orange Revolution. Others, like her stepfather, supported Mr. Yanukovych because they viewed him as the provider of security and economic stability. Ms. Soldak and her friends found themselves discussing politics and Ukraine’s direction – something they’d never done before.

Many hoped that Mr. Yuschenko’s victory would finally bring Ukraine closer to Europe. However, by the next election in 2010, Ukrainians grew frustrated with his politics. They saw that nothing had changed in their country, so they turned to Mr. Yanukovych, who again promised stability. His refusal to sign an EU-Ukraine Association Agreement in favor of closer ties with Russia prompted the Euro-Maidan protests. When police repressed protesters, killing 100 of them on Kyiv’s Independence Square, mobilization soared across the country, inciting a full-blown revolution that ultimately ousted Mr. Yanukovych from power.

Ms. Soldak’s native city, where loyalty and identity were more difficult to pinpoint, became the battleground between pro-Ukraine protesters and the separatists. Kharkiv opted to remain a part of Ukraine to preserve economic structures and to belong to a legitimate country. The statue of Lenin – which survived the collapse of the Soviet Union and the Orange Revolution in 2004 – was finally toppled, cementing Ukrainian patriotism among the youth.

The annexation of the Crimean Peninsula and the Russian invasion of eastern Ukraine, accomplished under the pretense of protecting Russian speakers, triggered an explosion of questions about what it means to be Ukrainian. Ms. Soldak lamented the friendships that fizzled with those who passionately welcomed the Russian annexation and invasion. These opinions greatly exasperated most Ukrainian diaspora viewers, yet they kept their eyes glued to the screen and their jaws clenched in anticipation.

In Ms. Soldak’s family, Mr. Yanukovych’s audacious corruption inspired a turning point. Once ambivalent about politics and the Russian-Ukrainian question, Ms. Soldak’s mother began a gradual transition that led to a dramatic revelation – one that must be viewed and heard to be fully appreciated. This revelation instantly relieved the tension in the room.

Back in New York and Minneapolis, Ms. Soldak learned about the Ukrainian diaspora’s nurturing of traditions, cultural centers, language schools, dance troupes, choirs, youth organizations and political rallies, prompting her to ponder her identity. Was she, a Russian speaker who understands but cannot speak Ukrainian fluently, “Ukrainian enough”?

The filmmaker’s earnest query inspired many heartfelt compliments and probing questions that kept moderator Oryna Hrushetsky on her toes during the Zoom-enabled Q&A session after the screening. The evening ended with spontaneous “Slava Ukraini” cheers from both sides of the screen and an invitation for the filmmaker to attend the museum’s Ivana Kupala lakeside gala. Anyone who takes this heartfelt, honest, unfiltered cinematic journey with Katya Soldak will surely reassure her that she is undoubtedly “Ukrainian enough.”

Readers who would like to host a screening of “The Long Breakup” can find more information by visiting www.thelongbreakupfilm.com.