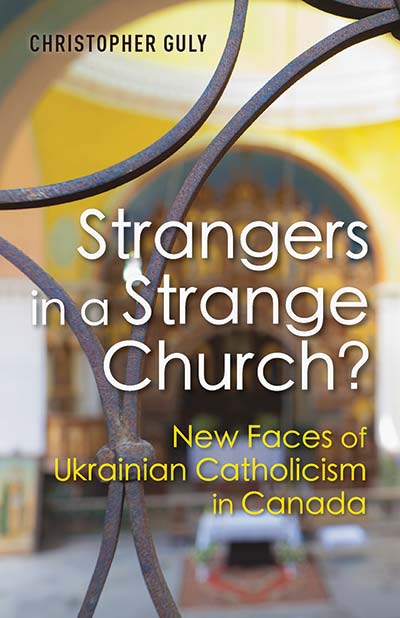 How do others see us? We rarely have an opportunity to find out. It may happen through the indiscretion of a third party. We may be disappointed or simply shocked by what even our closest friends think of us. And yet sometimes, we are pleasantly surprised. We may discover that we possess attractive traits of which we had not been aware.

The same is true of our Churches. Latin-rite Roman Catholics praise the Ukrainian Greco-Catholic Church for its history of martyrdom and its fidelity to tradition. Others are not so complimentary. What is most revealing, perhaps, are the impressions of outsiders who decide to join us. They see us in a way that we cannot.

This becomes vividly apparent in Canadian journalist Christopher Guly’s “Strangers in a Strange Church,” an account of eight cases of conversion to Ukrainian Catholicism, including one couple. None of these nine individuals is of Ukrainian origin. All joined the Ukrainian Church in eastern Ontario. But as the Rev. Peter Galadza points out in his introduction, there are many others.

The title, a reference to Exodus 23:9 and Leviticus 19:34, suggests the importance of hospitality to strangers. Indeed, one of the motivating factors for these conversions was the open friendliness of the parishioners of St. John the Baptist Ukrainian Catholic Shrine in Ottawa. But the word “strange” as applied to the Church can mean both “foreign” and “bizarre” – hence, perhaps, the question mark in the title of the book. To an outsider, the Ukrainian Church, with its long liturgies and seemingly impenetrable rite, can seem strange indeed.

Conversion, of course, is a delicate matter. In his introduction, Father Galadza firmly disavows proselytism. While his Church welcomes converts, it respects people’s choices. After all, conversion does not always last, and serial converts are not uncommon. But as Father Galadza points out, many cradle Catholics leave their Church too. One of the individuals discussed in this book, who was attracted to Orthodoxy, was impressed that the Ukrainian priest did not claim a “monopoly on truth or on God’s providence” (p. 29).

For a stranger, joining the Ukrainian Greco-Catholic Church is not simple or straightforward. Dr. Brian Butcher, a prodigious scholar who speaks seven languages and reads 11, says one must pass through three doors to enter an Eastern Catholic Church. The first is the liturgy and spirituality of the Byzantine or other Eastern rite. The second is Catholic teaching. Passing through the third door involves choosing a particular Eastern Catholic Church – there are nearly two dozen – with its sometimes challenging ethnic and linguistic specificities.

The beauty of Byzantine liturgy and spirituality are often what first draws people of other backgrounds to the Ukrainian Church. Convert Andrew Bennett is not alone in stressing the importance of aesthetics, especially in liturgy. “The Byzantine Christian world view is so shaped by beauty, so shaped by the importance of matter,” he says. “Matter matters, where the unseen God becomes human” (p. 65).

Musician Landon Coleman, who comes from a Baptist family, initially perceived the Ukrainian liturgy at Father Galadza’s Eastern Catholic Chaplaincy as strange: “This was an organized strangeness that I had never encountered before. It seemed like it didn’t belong in the modern world” (p. 91). While critical of the emotivism so common among Evangelicals, he says that at St. John the Baptist Shrine, “It didn’t matter how you felt: there was this beautiful, true stuff…” (p. 92). To be sure, this truth and beauty can only be communicated by a priest who, as Mr. Coleman puts it with regard to the Rev. Galadza, “means every word of the liturgy that he says and takes all of the traditions seriously” (p. 95).

The Kyivan Byzantine tradition goes beyond liturgy, however. Lisa Gilbert points to the Church’s calendar, its fasts and its feasts, which serve as a “constant reminder of the need to cultivate an ascetic life in the midst of a chaotic secular environment” (p. 75). A physician, she experiences the faith as much-needed spiritual healing: “We are all ill in many ways” (p. 77).

The second “door” in Mr. Butcher’s scheme of entry into the Ukrainian Greco-Catholic Church is Catholic teaching. He says the reason he became Eastern Catholic is that he fell in love with Orthodox liturgy and spirituality, but at the same time was convinced of the truth of the moral teaching and ecclesiology of Catholicism. Like most converts, he wholeheartedly accepts the Church’s positions on difficult issues such as sexual morality, including contraception, marriage and divorce, as well as end-of-life issues. But Catholicism is much more than a set of rules or an abstract system, as popular opinion would have it. This is particularly true of the Byzantine tradition.

One of the more philosophical of the group, Generation Z member Joshua Alli-Smith, sees faith as “something a-rational, and that revels in antinomy in its catholicity.” “Faith is concerned with things that are by no means ‘certain,’ and that our intellect cannot adequately divulge, but that reason can provide the groundwork for in necessitating…” In his view, faith allows “the possibility of Truth beyond my idea of truth and … the God beyond my idea of god” (p. 85).

Mr. Alli-Smith finds this far superior to “the nihilism or moral relativism so often packaged with a fashionable atheism” (p. 86).

Similarly, Pascal Bastien, a medical doctor, finds that the “science vs. religion” objections to the Catholic faith are weak and superficial. He finds that most people’s rejection of the faith is actually based on personal obstacles. Like Mr. Alli-Smith, Dr. Bastien appreciates the apophatic understanding of God, characteristic of the Eastern tradition, as a mystery beyond human understanding.

The third “door” in Mr. Butcher’s scheme is choosing a particular Eastern Catholic Church, which means living with its ethnic identity. True, the cultural specificities of the Ukrainian Church can be daunting. But Mr. Butcher points out that “sacramental belonging” to a Ukrainian church does not mean accepting Ukrainian cultural identity. It is not necessary to learn the Ukrainian language. You can still be yourself – Mr. Butcher is of East Indian and American parentage and was brought up by Baptist missionaries from Canada, while his wife is of Korean descent. English-language liturgies help make that possible.

In fact, as Mr. Butcher argues, Eastern Catholicism comprises several traditions, and even the liturgy of St. John Chrysostom is shared by different languages and cultures. This exemplifies the “unity in diversity” of the Catholic Church. In the words of Mr. Bennett, who has served as Canada’s ambassador for religious freedom, “We are the church of the Irish and Scottish, of French Canadians, and Koreans and the Dutch” (p. 64). “I want Ukrainians to know that what they have is beautiful and should be shared,” points out musician Mr. Coleman, “and that there has to be a balance struck between preserving the traditions and looking outward to try to make it easy for people to enter if they want to” (p. 96).

Contemporary society, however, does not make that entrance easy. Mr. Coleman remarks that “Ottawa is a tough town, and there aren’t a lot of people my age who are church-goers, so I sometimes feel like a weirdo” (p. 95). In his introduction, Father Galadza acknowledges that the ascetical, demanding and challenging Eastern tradition is counter-cultural, seemingly “impractical” even to cradle Ukrainian Catholics. It is thus particularly difficult for teenagers and youth to accept. The key to overcoming this problem, in his view, is love of God.

Father Galadza appears here as the catalyst for several of these conversions. Another factor seems to have been the proximity in Ottawa of the Metropolitan Andrey Sheptytsky Institute of Eastern Christian Studies, Holy Spirit Seminary, and a number of colleges and universities. Today, with the removal of the Sheptytsky Institute (with Father Galadza) to Toronto and of the seminary to Edmonton, Alberta, that happy juncture has vanished. But the principle of a synergetic constellation of people and institutions – clergy, laity, parishes, schools and perhaps monasteries – is one to keep in mind. And the future of the Church may depend on a clergy that is not merely “open to the world” in the spirit of Vatican II, but goes out and seeks disciples, miserando atque eligendo (taking pity and choosing), as Pope Francis’s coat of arms proclaims. For if Ukrainian “cradle Catholics” find a multitude of excuses to shun the Church, their pastors must go out “to the streets and lanes” and “highways and hedges” and find others to take their places at the Lord’s table (Luke 14:15-24).

Certainly these converts are a major benefit to the Ukrainian Greco-Catholic Church, and not only, as Father Galadza points out, in terms of additional numbers. Like many outsiders, for example immigrants, they are catalysts for the spiritual revival of their communities. Dr. Bastien’s Ukrainian-Canadian colleagues who had left their Church because of a linguistic and cultural gap and become Roman Catholic were surprised that he had moved in the opposite direction.

While the nine converts discussed in this book vary greatly in their ethnic, religious and social origins (Japanese-born Mr. Alli-Smith, for example, has an English Catholic father and a Guyanese Lutheran mother of Muslim ancestry), it is significant that all had a solid prior Christian formation, in most cases Protestant. While Dr. Bastien was raised as a Roman Catholic, he notes that his Presbyterian wife has taught him many things about faith and the Christian life: knowledge of Scripture, evangelical zeal and how to raise children. These converts’ familiarity with the Bible no doubt helps them to understand the Byzantine liturgy, especially its Old Testament sources, more deeply than most Ukrainians. They also exhibit a more conscious and actively affirmative kind of religiosity. Moreover, they experience the Ukrainian Byzantine tradition with a freshness and depth, born of fasting, prayer, study and service, that elude many Ukrainians, attached as they are to what Father Galadza describes as a merely folkloric religiosity.

Ukrainian religiosity, however, has evolved. The somewhat ritualistic and emotional pre-modern “village faith” has gradually given way to the more complacent, private religious affiliation of the Western bourgeois, seemingly typical of the Third Wave of Ukrainian immigration to North America. Both this, and the post-Soviet religiosity of the Fourth Wave, merit study. Can they survive in American society? Will they succumb to secularization? Or will they give way to a more vigorous kind of religiosity – evangelizing, intellectually sophisticated and prepared to withstand the pressures of a post-Christian society? In the latter case, it may well be due to converts like those featured in this book.

A Ukrainian version of this review appears in Patriyarkhat No. 2, 2020.