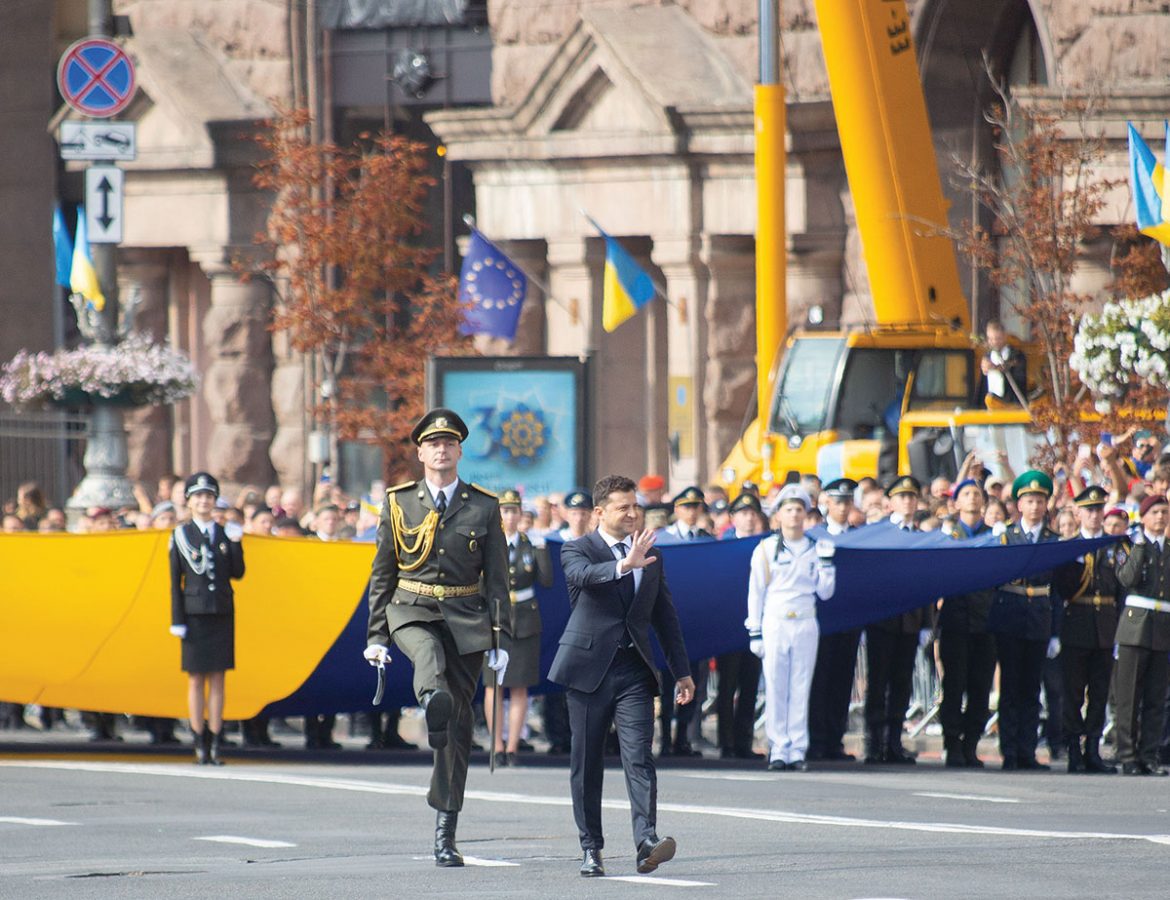 Seen in the background is an unfurled Ukrainian flag as an honor guard of serviceman accompanies President Volodymyr Zelenskyy to the podium on August 24 in downtown Kyiv, where the president delivered a speech to commemorate the nation’s 30th year of renewed independence.

KYIV – In his speech to the nation on the occasion of Ukraine’s 30th Independence Day celebrations and with representatives of all 30 NATO member countries in attendance President Volodymyr Zelenskyy emphasized Ukraine’s “restored statehood” and its emergence as a “powerful” nation.

Leading up to the celebration was a large-scale public dialogue of 30 weekly presidential forums devoted to specific topics, such as security and defense, peace and war, and fighting corruption and establishing the rule of law.

On the eve of Independence Day, the inaugural Crimea Platform took place as a diplomatic initiative to garner international support for Russia to ultimately relinquish control of the Ukrainian peninsula that it had forcibly seized in 2014, the first ever military outcome since WWII that saw a European country’s borders change.

A new state award called the Legend of Ukraine was created. It was presented to contemporaries who are “living legends,” the presidential office announced. 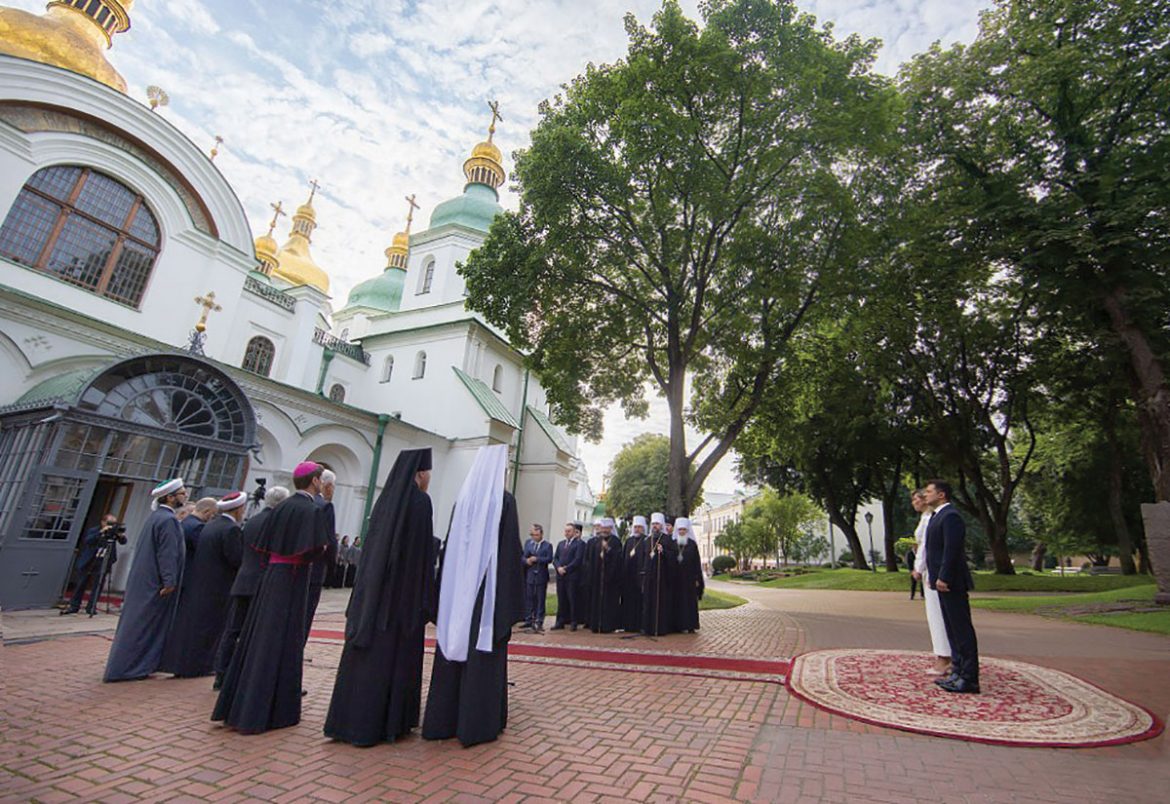 Also on August 23, Mr. Zelenskyy presided over a flag-raising ceremony in what his office said was the geographical center of the country – the village of Maryanivka in central Cherkassy oblast – to commemorate the nation’s flag day.

Once on stage, after being accompanied by an honor guardsman carrying a sword, the president in his remarks said Ukraine has had its “statehood restored.”

Mr. Zelenskyy linked the nation’s history to the feudal kingdom of Kyivan Rus that Prince Volodymyr the Great had ruled and eventually brought Orthodox Christianity to what is modern-day Ukraine. He continued to link that era to the prince’s seal, whose trident symbol comprises the nation’s small coat-of-arms. 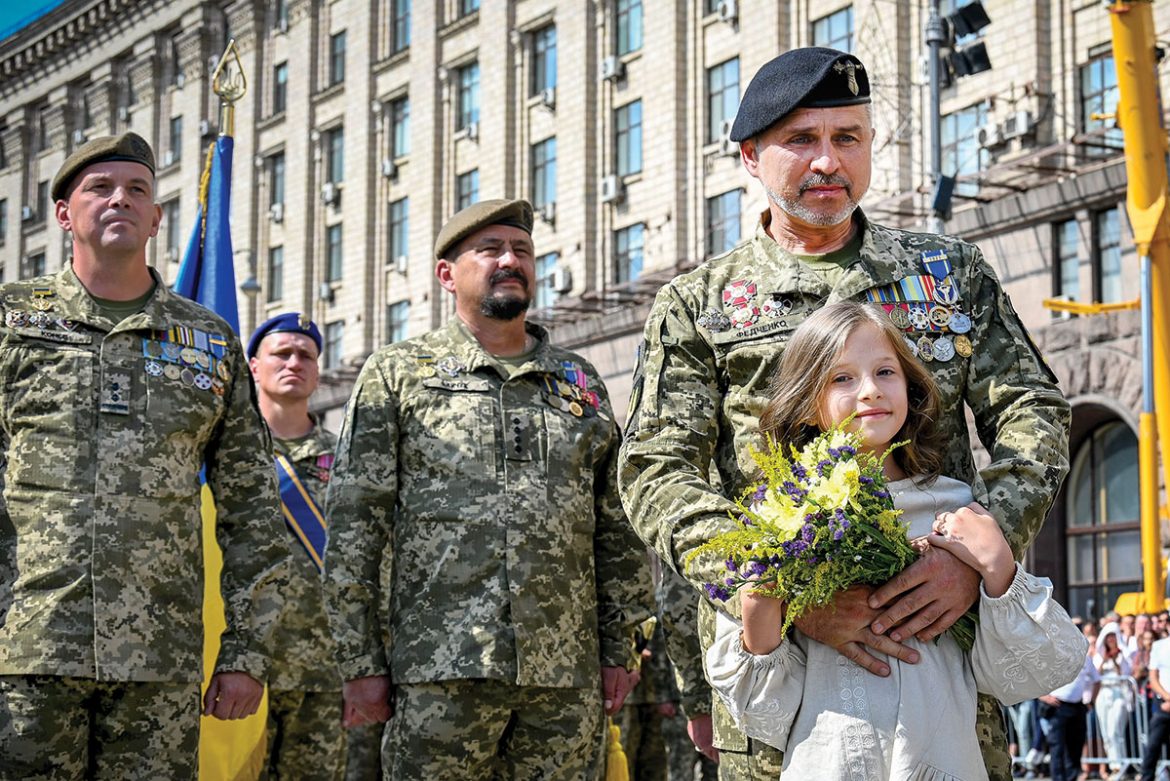 Ukrainian military servicemen stand on Khreshchatyk Street in Kyiv on August 24. One service member was joined by his daughter who was featured in a short video screened for the celebration of the country’s 30th year of renewed independence.

Mr. Zelenskyy spoke of the country’s “Kozak ancestry,” referring to the historical linkage between Ukraine and the Hetma­nate state, when successive freedom-loving kozak leaders had and then tried to preserve a nation-state.

The brief period of independence amid and immediately after World War I in what was called the Ukrainian National Republic was evoked as well.

The WWII period and the years afterward, into the early 1950s, of Ukrainian partisan insurgence against Nazi Germany and the Soviet Union were not mentioned.

Mr. Zelenskyy said he would sign a decree designating a “Day of Ukrainian Statehood,” along with a draft law that would be submitted to parliament so it could become a national holiday.

“We consider the year of Kyiv’s foundation to be its starting point. The capital of Kyivan Rus’ – Ukraine, which is rightly called the city where it all begins,” he said. “We will never give anyone a single stone of our history again, we will not allow ‘occupying’ any page of our history, ‘annexing’ our writers, our scientists, our athletes, our heroes who defeated Nazism.”

In front of dozens of foreign dignitaries and Ukrainian officials, Mr. Zelenskyy transitioned to what he said was a “powerful” nation emerging amid a time of war with Russian-occupying forces. 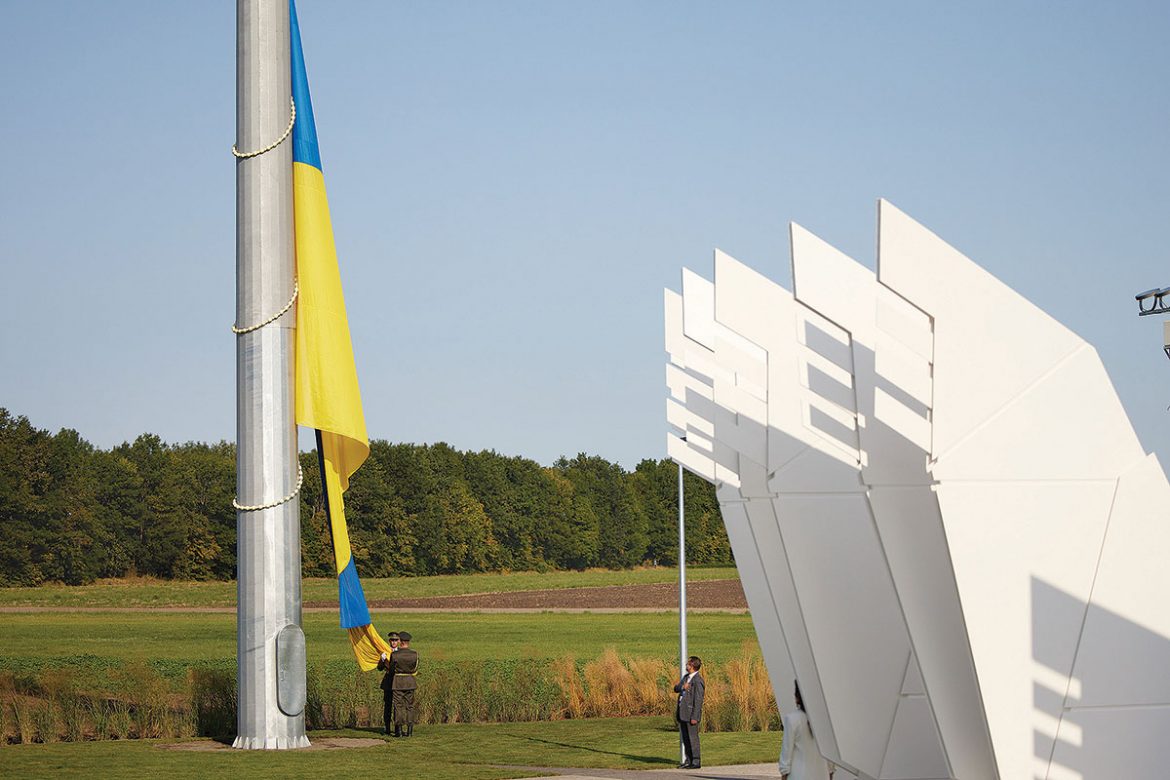 Ukrainian President Volodymyr Zelenskyy attends a flag raising ceremony in what his office says is the geographic center of the country – in the Cherkassy regional village of Maryanivka – on August 23 to commemorate national Flag Day.

He touted upgraded Soviet-era and new military hardware used by Armed Forces and other weaponry that is in development. The nation’s second successive wartime president boasted of infrastructure and digitalization projects as well.

“A powerful country is reviving its naval fleet, naval bases and building corvettes. A powerful country is a country that adopts a missile program for 10 years. [One] which builds thousands of kilometers of roads, hundreds of schools, kindergartens and hospitals, which is the first in the world to have a digital passport, which fulfills its promises and lifts the [prosecutorial] immunity of deputies [members of parliament], which for the first time gives people real ownership of [agricultural] land [after a 20-year moratorium was lifted],” Mr. Zelenskyy said.

A poignant and moving 13-minute theatrical, narrated film was shown on huge video screens in Independence Square. It chronicled many of Ukraine’s main historical events beginning with the Kyivan Rus era. The movie followed a young Ukrainian girl, holding a bouquet of flowers, as she seemed to search for someone while moving through seminal moments in the country’s history. It concluded with the girl, now in real time, running down the main parade route along Khreshchatyk Street in Kyiv until she finally finds her father, a soldier in Ukraine’s Armed Forces marching in the parade. The two embraced and the daughter handed her father the bouquet of flowers. The Ukrainian president could be seen wiping tears from his eyes. The video can be seen on YouTube (https://www.youtube.com/watch?time_continue=73&v=n9GJq0PJ1fQ&feature=emb_logo).

After his 18-minute speech, Mr. Zelens­kyy gave out state awards, some posthumously, from the highest – Hero of Ukraine – to civilian awards, such as the Yaroslav Mudriy and Freedom awards.

Before asking for a minute of silence, Mr. Zelenskyy said the solemn moment was “devoted to our defenders, the soldiers who gave their lives…for our chance to be here today.” 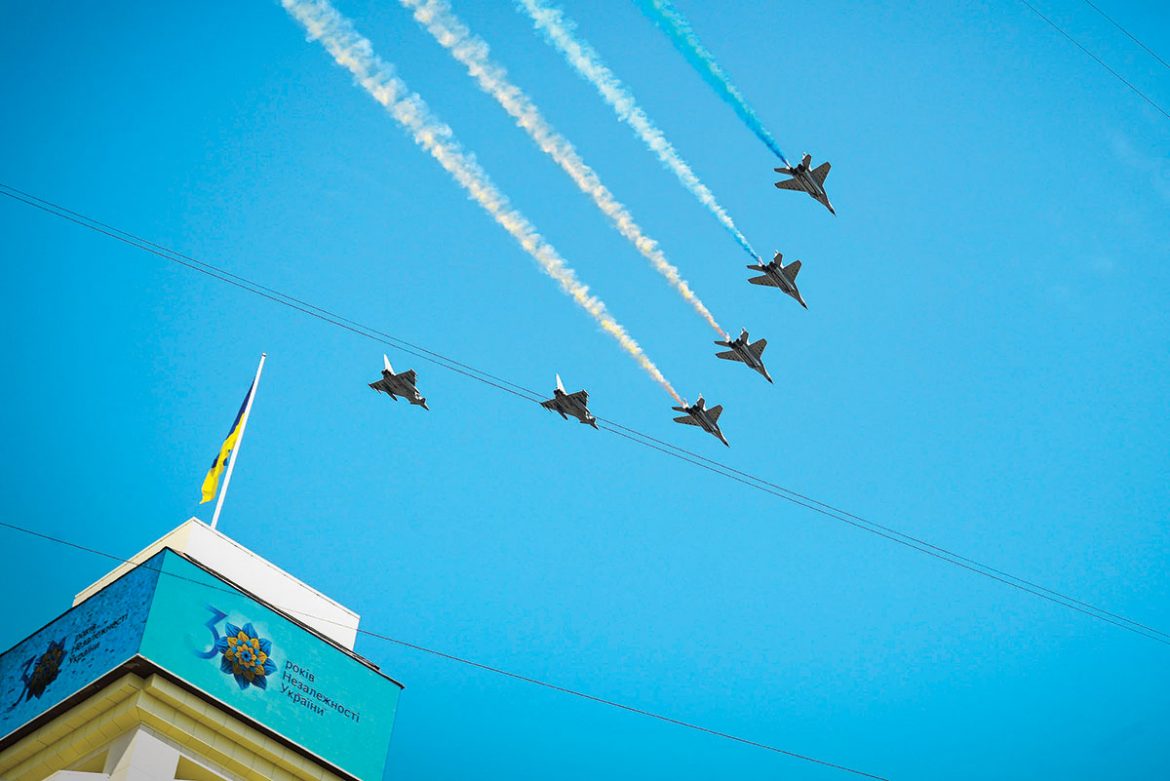 British Typhoon fighter jets emit blue and yellow smoke, the colors of Ukraine’s flag, as they fly overhead in downtown Kyiv on August 24 during a military parade to commemorate the nation’s 30th year of renewed independence.

He noted the sacrifice of fallen soldiers who had died “for our future, our children and grandchildren…so they could be here for the 30th Independence Day year.”

The sound of a clock ticking emanated from the loud speakers and ensued for 60 seconds.

Members of the Armed Forces and other elements of Ukraine’s auxiliary units then marched to usher in the military parade along the main thoroughfare of Khreshchatyk Street. They were followed by soldiers from 13 other countries: Britain, Georgia, Estonia, Canada, Latvia, Lithuania, Moldova, Slovakia, Finland, Sweden, Denmark, the U.S. and the Czech Republic.

A live feed of Ukrainian naval ships in the Black Sea near Odesa was shown on the big video walls.

Ukrainian military and transport aircraft, including helicopters, flew overhead. The flyovers included fighter jets and the world’s biggest plane – the AN-225 Mriya transport equipped with six turbine engines. The plane, capable of carrying a load of 225 tons, is affectionately known by its crew as Marusia.

Back on the ground, Ukraine showcased upgraded Soviet-era armor as well as newly developed hardware. The Kharkiv-made Oplot tank, Ukraine’s newest, rolled down the street. State-of-the-art Turkish-made Bayraktar battle drones were strewn atop armored vehicles. Outfitted U.S.-provided Hummer vehicles towed what appeared to be newly-designed unmanned weaponry. Various artillery was showcased, some surface-to-air.
When the elaborate parade ended, a young girl sang “Ukraino” to conclude the formal part of commemoration.

In the afternoon at 1 p.m. more than 10,000 people took part in an informal event called The March of Patriots. It was composed of war veterans from the Russia-instigated conflict in the Donbas, as well as their families and volunteers. They were joined by military medics, chaplains, the Belarusian diaspora and relatives of those who were killed in the 2014 Euro-Maidan revolution.