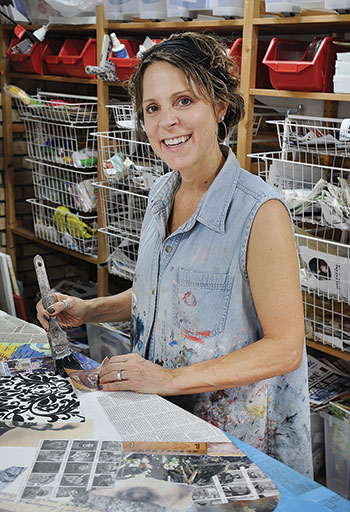 KYIV – Ola Rondiak, known for her stunning and unique depictions of Ukraine’s Maidan, or the Revolution of Dignity of 2014, will exhibit her works – including paintings, mannequins, sculptures and a video installation of interviews with Ukrainians about the ongoing war in the country’s east – at The Delaware Contemporary in Wilmington, Del., on August 15 through October 15.

Ms. Rondiak, a graduate of Hunter College, grew up in Ohio in a Ukrainian family. She studied art in both Ukraine and Hungary. Her paintings stem from her family’s experiences of living in Ukraine, the events of World War II, Stalin’s Iron Curtain, the Orange Revolution and the Revolution of Dignity in 2014.

These events shaped Ms. Rondiak’s worldview, and emotional experiences began to surface in her paintings. Her iconographic portraiture of Ukrainian women depicts their “determined and indomitable spirit.”

Writing in The Ukrainian Weekly’s issue of July 13, 2014, Zenon Zawada described the artist’s depictions of faces from the Revolution of Dignity: “The expressions are those seen in Byzantine iconography, reflecting Slavic stoicism and the unmoved patience that forms the bedrock of Ukrainian values. Ms. Rondiak also drew on traditional symbols, such as wreaths and embroidered shirts, without slipping into kitsch. Instead, the traditional was contemporized, reflecting the harshness of the post-Soviet abyss that Ms. Rondiak felt surrounding her. Several works feature a thought-provoking pose of a woman with her hands placed behind her head and arms and elbows outstretched to the widest. The ‘freedom pose,’ as she refers to it, is so striking that it could become Ms. Rondiak’s unique contribution to Euro-Maidan iconography that will inevitably emerge.” 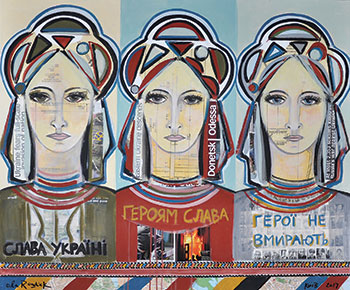 Ms. Rondiak’s “motanka” sculptures are inspired by the ancient Ukrainian dolls that were typically passed down from mother to daughter, as a talisman of good health and fortune. The motanky are faceless, as the eyes are windows to the soul, and the soul can be bad or good. Ms. Rondiak’s sculptures have embraced the ancient aura of the motanka, tied it in with her personal experiences and history, all the while maintaining a contemporary art presence.

The catalogue for her exhibit, titled “Behind the Lines,” at The Delaware Contemporary, notes: “Lines create order, stability and even comfort, but not without the risk of narrowing our perceptions of reality. They can make us feel safe by creating borders or threatened when enemy lines draw near. Lines of words in the media can educate us or brainwash us. In this exhibit, the artist explores the connection between what lies on the surface and what lies behind the lines.”

Ms. Rondiak “has observed first-hand how the line between peace and war is a fragile one,” the catalogue continues. “Having lived over 20 years in Kyiv, Ukraine, as well as being a first-generation American, the artist has seen and heard these lines crossed many times. In her childhood, she heard countless stories of the enemy lines moving and her family escaping the brutality of the Soviet regime. Living through two revolutions in Ukraine she watched riot police lines, military lines and even country borderlines move. Over the years, she has encountered the results of 70 years of Soviet propaganda and brainwashing. Ola’s background as a psychotherapist has immersed her into human psychology, which gives her an understanding of how the lines of perception directly impact one’s beliefs and identities.”

Ms. Rondiak has had solo exhibitions in Ukraine, Europe and the United States at such venues as America House and the U.S. Embassy in Kyiv; the Ukrainian ambassador’s residence in Berlin, Germany; The Castle in Fertőrákos, Hungary; the Ukrainian National Museum in Chicago; the Ukrainian Museum-Archives in Cleveland; the Ukrainian Educational and Cultural Center in Philadelphia; and Soyuzivka Heritage Center in Kerhonkson, N.Y.

Ms. Rondiak’s giant icon-style patriotic portraits can be seen in Kyiv’s historic Podil district. Peter Dickinson of Business Ukraine wrote in July 2016: “An instinctive artist with a professional background in psychotherapy, Rondiak recently created one of her signature icon-style Ukrainian pop art portraits in Podil. Her art is heavily influenced by Ukrainian folklore themes and focuses on portraits of Ukrainian women produced in a funky, contemporary style featuring plenty of the bright colors and floral touches traditionally associated with Ukrainian femininity. Her choice of subject matter is no accident – it reflects Rondiak’s admiration for what she terms as ‘the determined and inspirational women of Ukraine’, and the indomitable national spirit they represent.”