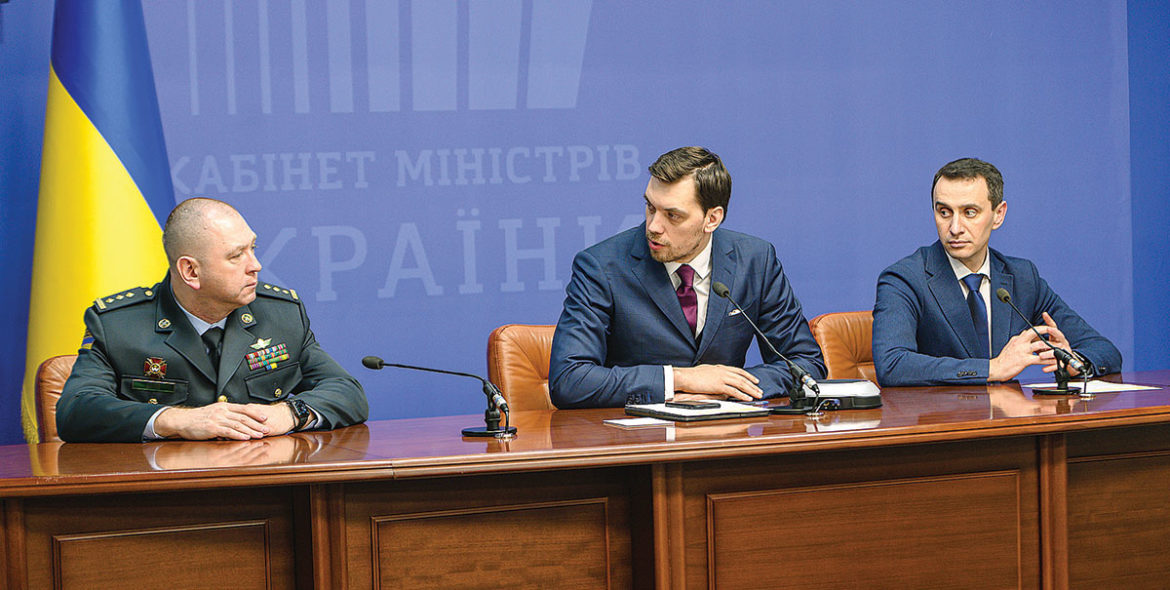 Press Service of the Cabinet of Ministers of Ukraine

At a briefing in Kyiv about efforts to prevent the coronavirus from entering Ukraine (from left) are: the head of the State Border Guard Service, Serhiy Deyneko, Prime Minister Oleksiy Honcharuk and Deputy Minister of Health Viktor Lyashko.

KYIV – On February 20, a Ukrainian airplane evacuated 45 citizens of Ukraine and 27 foreigners from the city of Wuhan, China, the epicenter of the COVID-19 outbreak. After stops in Almaty and Kyiv, and circling in the sky as it awaited clearance to land, the chartered plane arrived in Kharkiv. But the most challenging part of the journey was still ahead.

An angry mob attacked the bus transporting evacuees from Kharkiv’s airport to a sanatorium in the Poltava region for a two-week period of quarantine. The protest turned millions of eyes to the town of Novi Sanzhary and elicited countless questions; many cited the lack of pertinent information that should have been shared with the public.

All of the evacuees were reported to be healthy, but were placed under observation.

On February 26, the deputy minister of health, Viktor Lyashko, said, “There are no cases of COVID-19 infection registered in Ukraine right now. We have the first results of a sample study of people in Novi Sanzhary – they are negative.” He added: “We are at the midpoint of the quarantine today; it’s the seventh day, and everything is calm. There are no people with symptoms of acute respiratory infection. The morning medical examination did not record any fevers.”

Two days earlier, Prime Minister Oleksiy Honcharuk had announced at a briefing that the government was tightening security measures to prevent the introduction of the coronavirus on the territory of Ukraine and that temperature screening measures will cover inbound travelers from countries where coronavirus cases have been confirmed.

In addition to airports, screening will take place at other checkpoints. “There are 32 checkpoints in Ukraine. No passengers who have symptoms of the disease will enter the territory of Ukraine unnoticed,” the head of the State Border Guard Service, Serhiy Deyneko, emphasized.

Mr. Honcharuk also stated that all relevant services are working with the operational headquarters that has been set up. “A sufficient number of individual isolation rooms and teams of infectious disease doctors are ready. We do not feel any deficit. Therefore, any widespread concern is groundless. Ukraine is ready to contain any danger and prevent the spread of the virus,” the prime minister explained.

It remains unclear why the evacuation from Wuhan happened so late. By the time the Ukrainian plane arrived, 14 countries had already transported their citizens from Wuhan. On February 3, the Ukrainian government ordered “emergency evacuation of Ukrainian citizens.” The preparations for this operation led to the situation that occurred on February 20.

When the first group of evacuated Ukrainians arrived in Novi Sanzhary, residents opposing the relocation of the evacuees to the area came out to protest. Hundreds of people, fearing the evacuees could carry the virus to Ukraine, attacked the buses with rocks and metal bars. A few hundred policemen were summoned to Novi Sanzhary, and some 20 protesters were arrested. Most of them were held briefly and soon afterwards were released. Reports say that nine police officers were injured.

Minister of Health Zoryana Skaletska said that “fake information” about alleged coronavirus cases in Ukraine had caused the panic. All of the evacuees were reported to be healthy, but were to be placed under observation. To reassure residents, Ms. Skaletska, a biomedical lawyer, said she would live with the evacuees in quarantine for two weeks.

From the sanatorium in Novi Sanzhary, she wrote on her Facebook page that “the psychological condition of the people being observed is good. They try to diversify their leisure time: some are doing sports as they can, some are reading books. Board games were brought to the sanatorium. We are grateful to all Ukrainians who responded and conveyed these useful things!”

“We all – I am sure – wish them good health and believe that they will be at home with their loved ones in the next few weeks,” President Volodymyr Zelenskyy said of the Wuhan evacuees. “We keep saying that Ukraine is Europe. However, yesterday in some episodes it seemed that we are Europe of the Middle Ages, unfortunately. Let’s not forget that we are all human beings.”

Answering the news media’s questions, the president stated that the protests in several regions of the country against the placement of Ukrainians evacuated from China in local medical institutions had been politically motivated. “The best conditions were provided in four places. One of them is in the Ternopil Region… Unfortunately, I cannot call it human actions and do not want to pick up other words. Unfortunately, this happens. …I think ordinary people have nothing to do with it. In some cities, these pseudo-activists had political support,” Mr. Zelenskyy commented, according to the website of the Presidential Office of Ukraine.

The president also expressed confidence that law enforcement agencies would soon clarify the circumstances of the protests and their possible planned nature. “I think we will also see very soon that people both in the agitation against land reform and against seeing our citizens in Ukraine will coincide,” Mr. Zelenskyy added. He was referring to protests against proposed legislation that would allow the sale of agricultural land.

The Security Service of Ukraine (SBU) said a fake e-mail that appeared to be from the Ministry of Health had been sent to the ministry’s entire contact list. The SBU said the fake e-mail originated outside Ukraine, and that the incident was being investigated.

The airplane sent by Ukraine also helped to evacuate citizens of other countries that had sought assistance. According to the State Secretary of the Ministry of Foreign Affairs Andriy Zayats, “All 48 citizens of Ukraine and 29 foreign nationals arrived for boarding: eight – Argentina, five – Dominican Republic, five – Ecuador, four – El Salvador, two each – Kazakhstan and Costa Rica.” Individual citizens from Israel, Montenegro and Panama also were flown from China to Ukraine. Several were not allowed to board after they were checked by medical personnel.

Chinese authorities have put Wuhan, with a population of some 11 million people, in a virtual lockdown, and most countries have evacuated their nationals from the city, putting them in some form of quarantine.

Ex-Minister of Health Ulana Suprun regularly writes about COVID-19 and proposes strategies on how to deal with the outbreak on her Facebook page. “The lack of information and professional commentary on the coronavirus against the backdrop of the spread of misinformation and panic poses a serious risk to everyone,” Dr. Suprun commented.

“The most rational strategy, in this case, is honest, simple and straightforward communication, especially by government agencies that take care of the issue. The lack of confidence in such situations is worse than the virus itself. In particular, due to a lack of information and poor communication, we now have such a high level of sabotage on the ground by local managers. It is now essential to remain calm and take care of your information hygiene. In the case of a coronavirus, it is also a matter of national security and mental health,” the ex-minister, a physician, wrote.

Dr. Suprun also said she believes that the evacuation of Ukrainians from China should have taken place much earlier – by the end of January. “It is not unusual that the Ukrainians were not ready for evacuation, because no one expected that they would have to evacuate citizens from other countries,” she wrote. “The location for evacuees should have been selected in the Kyiv region. This is the safest area because there is an airport nearby; leading specialists, clinical and laboratory facilities are located in the region. Good infrastructure and hospitals are also available. For example, a Security Service of Ukraine sanatorium in Vorzel might be a good choice,” Dr. Suprun offered.

A medical institution in the Lviv region was among those under consideration for the quarantine. This information led to local protests and a road blockade, which were strengthened by ill-conceived statements by local opinion leaders and politicians. Oleh Synyutka, former head of Lviv Oblast Administration and a current member of Parliament, wrote on Facebook: “Lviv may become the epicenter of biological danger? A rhetorical question: Why are people from the danger zone of China sent to the Lviv region?”

Mr. Synyutka also wrote: “What is this step by a new government: recognition of the region as the most organized and prepared with responsible experts, or revenge for patriotism and a pro-Ukrainian position during election campaigns?” Meanwhile, local authorities denied rumors that a military hospital in the area would become the location for the quarantine.

Journalist Volodymyr Runets, а reporter from Kyiv, posted this on his Facebook page: “Migrants from Donetsk arrived. They brought everything they could. ‘We have already been accused that the war is because of us,’ said the benefactors. ‘These people are being blamed for the virus.’ They [the IDPs from Donetsk] refused to be interviewed, unloaded the car and left,” wrote Mr. Runets.

China has reported more than 2,000 deaths from COVID-19; over 75,000 people are infected. The World Health Organization has said that more than 1,000 cases have been reported in nearly 30 other countries.