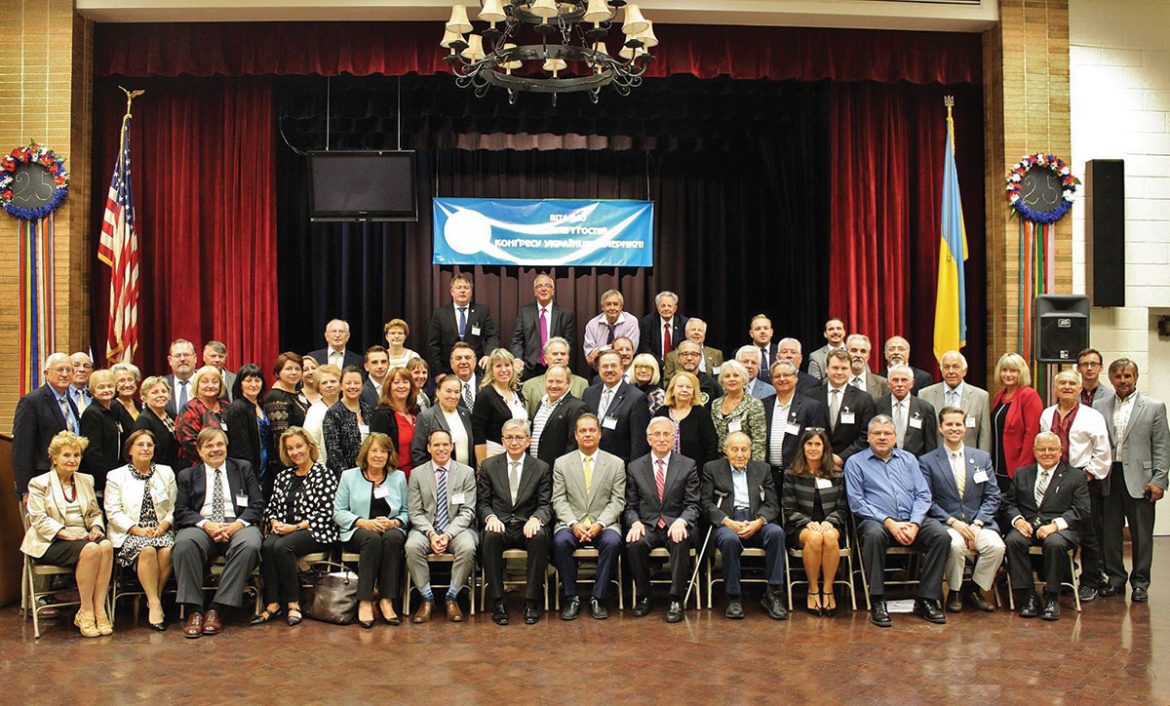 Delegates at the XXII Congress of Ukrainians in America held in Hartford, Conn.

HARTFORD, Conn. – The XXII Congress of Ukrainians in America, held at the Ukrainian National Home in Hartford, Conn., over the weekend of September 23-25, elected Andriy Futey as president of the Ukrainian Congress Committee of America (UCCA), ratified over two dozen changes to the organization’s by-laws, received greetings from two presidential candidates, and charted a course forward over the next four years and beyond for the organized Ukrainian diaspora in the United States. 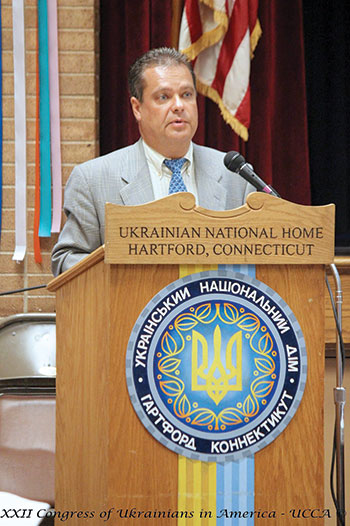 The newly elected president of the Ukrainian Congress Committee of America, Andriy Futey.

Over 80 registered delegates followed in the footsteps of their predecessors who had gathered on 21 previous occasions over the past 76 years. Ukrainian community leaders traveled from across New York, Connecticut, New Jersey, Pennsylvania, Michigan, Massachusetts and Illinois. In addition to the leaders of individual local chapters of the UCCA, the body of delegates was also made up of representatives of notable organizations such as the United Ukrainian American Relief Committee (UUARC), the Ukrainian National Association, the Providence Association of Ukrainian Catholics in America, the Ukrainian American Youth Association, New Ukrainian Wave, the Organization for Defense of Lemkivshchyna, the Society of Veterans of the Ukrainian Insurgent Army, the Federation of Ukrainian Student Organizations of America, the Ukrainian Free University Foundation, the Ukrainian Freedom Foundation, the Organization for the Defense of Four Freedoms for Ukraine, as well as the Women’s Association for the Defense of Four Freedoms for Ukraine. Representatives of several Ukrainian federal credit unions were also leading voices in the discussions, including those from Yonkers, N.Y., Clifton, Passaic and Whippany, N.J., Detroit and New York City. 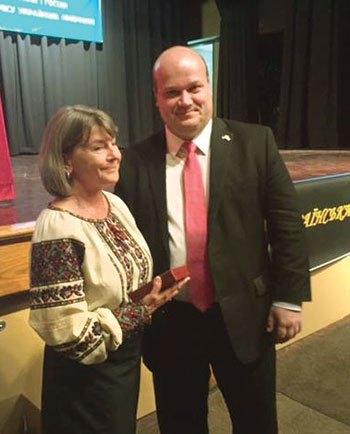 Embassy of Ukraine in the U.S.A.

Ukraine’s Ambassador to the U.S. Valeriy Chaly presents the Order of Princess Olha to Roma Hadzewycz, editor-in-chief of The Ukrainian Weekly and Svoboda. 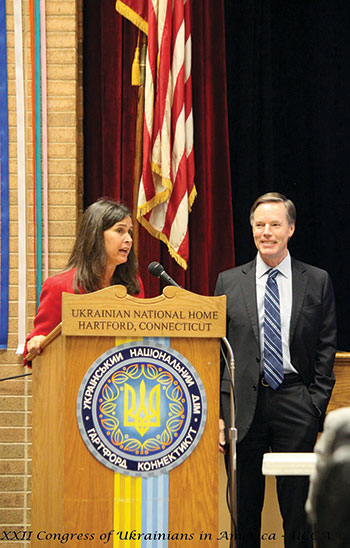 Prior to the commencement of the first plenary session on Saturday morning, the assembled delegates welcomed R. Nicholas Burns, a high-level political surrogate for the presidential campaign of Hillary Clinton. Mr. Burns currently serves on the Foreign Affairs Policy Board at the U.S. Department of State, and previously served as undersecretary of state for political affairs, U.S. ambassador to NATO, ambassador to Greece, a member of the National Security Council at the White House, where he was senior director for Russia, Ukraine and Eurasia Affairs and special assistant to President Bill Clinton and director for Soviet affairs in the administration of President George H.W. Bush.

Mr. Burns was invited by former Secretary of State Clinton to her bilateral meeting with President Petro Poroshenko at the United Nations earlier in the week. At the UCCA congress, he pressed the case for the presidential candidacy of Secretary Clinton and also offered his personal conviction that Ukraine, as a friend and ally to the United States, deserves additional support in the form of lethal defensive weapons. He said he hoped to see a President Clinton visit Ukraine for the fifth time early in her presidency, standing on the Maidan Nezalezhnosty (Independence Square), as a powerful symbol of the United States’ resolve to support its friend and ally. 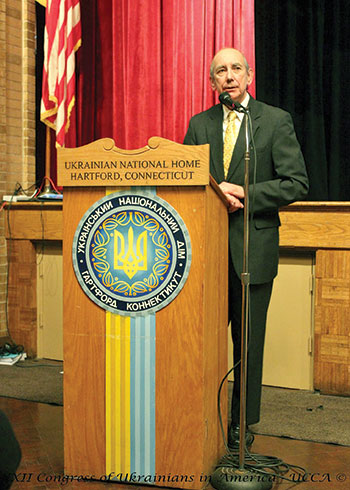 The first U.S. ambassador to Ukraine, Roman Popadiuk, delivers a keynote address at the congressional banquet.

Mr. Burns finished his remarks by delivering a personal message from Secretary Clinton to the delegates that was distributed to all attendees. The message hailed Ukrainian Americans as an important part of “the fabric of our country” and emphasized that the United States “must continue to stand with the Ukrainian people as they continue their struggle in support of liberty and democracy.”

A greeting to the congress came also from independent Republican candidate for president Evan McMullin, who pledged to “fully support the independence, sovereignty and territorial integrity of Ukraine” and to “work to ensure all territories illegally annexed or occupied by Russia are restored.”

The first plenary session began with the election of the presidium. Elected as congress chair was a longtime community leader and head of the UCCA’s Philadelphia branch, Eugene Luciw. Deputy chairs were Oleh Dekajlo of Long Island and Kenneth Wanio of New Jersey. Ms. Duplak of New Jersey and Peter Krutiak of Illinois took minutes as Ukrainian-language and English-language secretaries, respectively.

The congress also presented two forward-thinking panel discussions on Saturday afternoon, featuring a mix of perspectives from voices within and outside the organizations present at the Congress.

The first discussion – “Support Ukraine” – was moderated by the first U.S. ambassador to Ukraine, Roman Popadiuk. Focusing on the millions of dollars and thousands of hours of volunteerism donated in the U.S. to aid Ukraine throughout the Revolution of Dignity and to support Ukraine’s defenders against Russian military aggression, the panel featured two UCCA Executive Board members, Dr. Larissa Kyj (UUARC) and Mr. Sawkiw, director of the Ukrainian National Information Service, and Vasili Rukhadze of the Georgian Association in the USA.

The second panel – “Hromada 2040” – was yet another interesting mix of voices that led everyone present towards envisioning the Ukrainian diaspora in the coming decades. Roma Hadzewycz, editor-in-chief of the newspapers Svoboda and The Ukrainian Weekly, moderated the discussion presented by Andrea Chalupa, award-winning author and founder of the Digital Maidan activist platform; George Mykytyn, chairman of the Ukrainian American Youth Association; Ayla Bakkalli, U.S. representative of the Mejlis of Indigenous Crimean Tatar people of Ukraine; and Myroslava Rozdolska, president of New Ukrainian Wave. 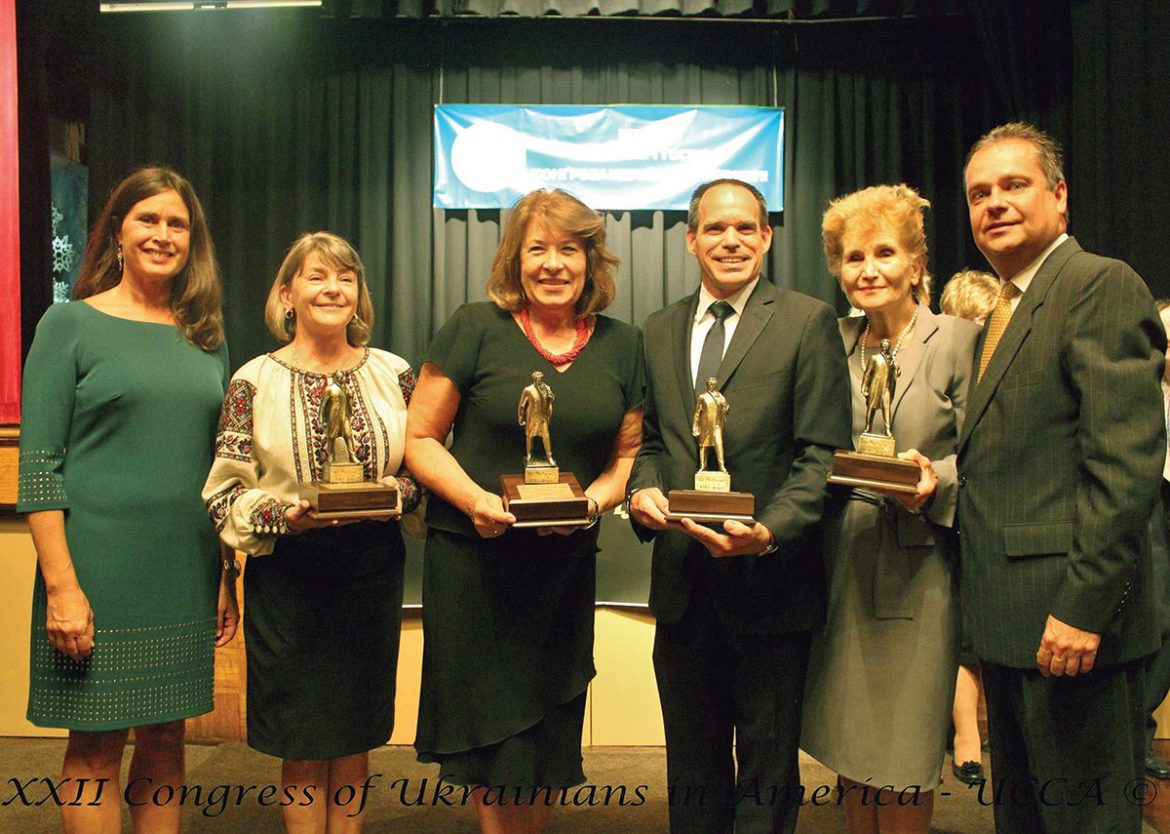 On Saturday evening, the delegates were joined by local community leaders at a gala banquet celebrating Ukraine’s 25th anniversary of independence. In addition to performances by the Yevshan Ukrainian Vocal Ensemble under the direction of Alex Kuzma and the Zolotyj Promin Ukrainian Dance Ensemble under the direction of Orlando and Larisa Pagan, and the choir Lanka Halychanka, the over 200 banquet attendees were treated to two keynote addresses. Ambassador Popadiuk discussed at length the transformation he has personally witnessed both in Ukraine and within the Ukrainian diaspora in the 25 years since Ukraine’s re-establishment of independence. Ukraine’s Ambassador to the U.S. Valeriy Chaly hailed the work of Ukrainians in the United States, especially that of the UCCA leadership, which Ukraine’s leaders understand is what enables this diaspora community to advocate for aid to Ukraine in ways that many other countries cannot.

The banquet was also addressed by two Democratic legislators who represent Connecticut in Congress: Rep. John Larson, who was in attendance, and Sen. Chris Murphy, who appeared via video along with Ukrainian National Deputy Nadiya Savchenko.

The final event of the evening was the presentation of the Shevchenko Freedom Award, UCCA’s highest honor. Recipients who were in attendance to receive the award that evening included the long-time director of the UCCA’s Washington office, UNIS, and a former UCCA president, Mr. Sawkiw. Also receiving the award were Dr. Kyj, longtime director of the United Ukrainian American Relief Committee, as well as Ms. Duplak, long-time UCCA executive secretary, distinguished editor, business owner and former president of the Organization for Defense of Lemkivshchyna.

The family of Markian Paslawsky, the only Ukrainian American to have given his life in defense of Ukraine against Russia’s most recent invasion, accepted the award in his name, adding to the many posthumous honors bestowed on this hero, including Ukraine’s Order of Danylo Halytsky, a memorial gravestone and plaque at the historic Askold’s Tomb in Kyiv, the Iron Plast Cross – Plast’s highest honor for individuals fighting in defense of Ukraine, and the naming of both a school and a military rehabilitation center in Ukraine in his honor.

The final recipient of the Shevchenko Freedom Award was doubly awarded that evening. Not only was Editor-in-Chief Hadzewycz honored with the Shevchenko Freedom Award, but she was further surprised when Ambassador Chaly finished his remarks by calling her up to receive a commendation from President Poroshenko for her “contribution to strengthening the international authority of Ukraine, popularization of its historical heritage and modern achievements.”

Officially awarded the Order of Princess Olha (third degree) by presidential decree in August 2015 in recognition of her work in leading The Ukrainian Weekly, Ms. Hadzewycz’s schedule had not allowed her to receive the honor until that moment. Thanks to the efforts of Ambassador Chaly, and the opportunity that the XXII Congress afforded, the honor was bestowed in the presence of over 200 Ukrainian American civic, cultural and religious leaders – the very same audience that relies on The Ukrainian Weekly and Svoboda to be the voice of the community.