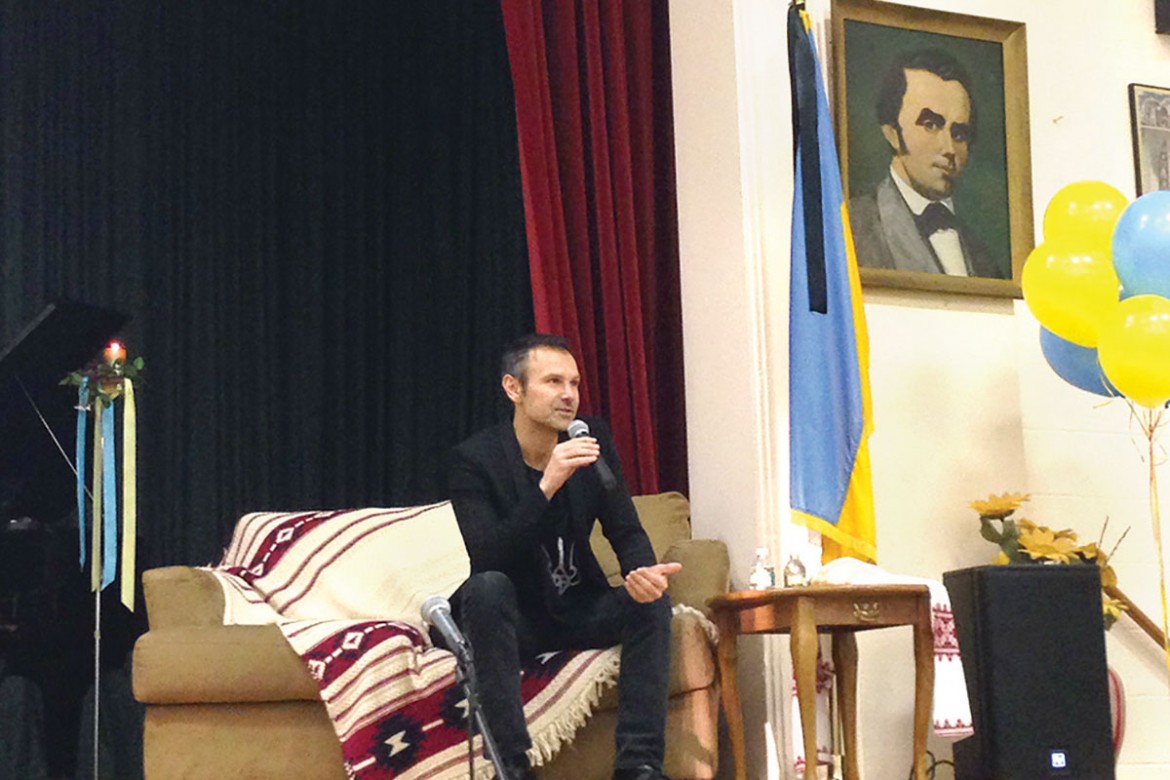 NEW HAVEN, Conn. – “I decided to rest usefully. I wanted a break from the way I have been for the last 15 years, like a squirrel on a wheel.” Svyatoslav Vakarchuk , the famed headliner of Ukraine’s most popular rock band, Okean Elzy, thus described his arrival in New Haven in August 2015 to spend a semester at Yale University as one of 16 World Fellows at the university.

The Yale World Fellows program seeks to cultivate and empower a network of globally engaged leaders committed to positive change through dialogue and action. Created in 2002 as part of Yale’s efforts to become a more globally focused university, the program engages mid-career thinkers and doers who are on a clear trajectory of success. These creative practitioners are invited to come to Yale to explore critical global issues, participate in cross-disciplinary studies, sharpen leadership skills and build relationships with other emerging leaders throughout the world.

Currently there is an active network of some 250 World Fellows in 81 countries. Besides Mr. Vakarchuk, this year’s class includes 15 leaders, among whom are an anti-corruption activist from Ethiopia, a journalist from India, a Reuters photographer, a television producer from Kenya, a trade policy expert from China, an interdenominational faith leader from the United Kingdom and a development economist from South Africa.

Mr. Vakarchuk was the first Ukrainian artist to make it big in the post-Soviet region. Okean Elzy was formed in 1994 when Mr. Vakarchuk was just 19 years old, and the band has grown up together with a newly independent Ukraine that has stumbled through a succession of failed governments. And, while the people may have lost faith in their leadership time and time again, Mr. Vakarchuk and his band continue to be popular.

The protests in which Mr. Vakarchuk played an important role, both in 2004 (the Orange Revolution) and 2013-2014 (the Revolution of Dignity), have only amplified his cultural and political popularity. Mr. Vakarchuk continues to inspire and mentor young musicians, artists and cultural figures. Largely because of Mr. Vakarchuk it has become cool to sing in Ukrainian and to wave the Ukrainian flag; indeed, Okean Elzy’s music has become part of Ukrainian identity.

Immediately upon his arrival at Yale, Mr. Vakarchuk – or Slava, as he likes to be called – immersed himself in his studies and in a quest to hone his English language skills. With all university courses open to him, he chose intensive study in management, political science and law. Soon after settling in, however, his restless, bold and energetic nature fully emerged.

Through his contacts with the younger generation in Ukraine, Mr. Vakarchuk has become perhaps Ukraine’s foremost civic activist. His music and the force of his personality have greatly shaped the thinking of young people about what it means to be a Ukrainian today. And, during his stay at Yale, he was determined to share his opinions with all who would listen about what was both right and wrong with Ukraine today.

In a series of appearances as a World Fellow, Mr. Vakarchuk visited Harvard, Columbia, Fordham, Stanford, Berkeley and other venues, where he expressed his faith in Ukraine and espoused his views on the need to launch a massive campaign to grant Ukrainian opportunities to be educated in the West, with a goal of combating corruption, learning to accept responsibility for one’s actions, or lack thereof, and building a strong civic society in Ukraine.

While in the United States, Mr. Vakarchuk traveled repeatedly to New York City, and to Washington, where he spoke at the Council of Foreign Relations and appeared before the Atlantic Council, as well as to Canada. At Yale, he engaged his World Fellow colleagues and professors in discussions about what was needed to improve the situation in Ukraine.

A benefit for orphans

Mr. Vakarchuk and Okean Elzy have a long history of supporting charitable and humanitarian causes in Ukraine. So it was not surprising that he agreed to lead a benefit fund-raiser in New Haven to raise support for children orphaned by the events of the Maidan and the anti-terrorist operation (ATO) necessitated by the ongoing war in southeastern Ukraine. What was surprising, however, was the enthusiasm and the turnout of hundreds, mostly young people on December 6, 2015, for an event publicized only locally and through social media.

Among those in attendance were Yale professors Timothy Snyder and Marci Shore – the former the well-known historian, author and scholar specializing in Central and Eastern Europe, and the latter a professor of intellectual history who is writing a book about the Maidan as an ongoing people’s movement.

And so on December 6, 2015, a capacity crowd filled St. Michael Ukrainian Catholic Church Hall in New Haven to spend an afternoon with Slava in an informal setting, to engage in conversation and to play selected music videos from his vast repertoire, including several from his upcoming new album.

After a traditional Ukrainian greeting with bread and salt, Mr. Vakarchuk related several amusing personal anecdotes about his early years: about how he started singing at age 2 and about the formation of his first band in 1990-1991, saying that history doesn’t remember this band and he does not bring it up.

He spoke about the huge impact Paul McCartney’s song “Let It Be” had on him and how he became an apostle of Beatles music as a result. He vividly recalled feeling like an early disciple of Christianity in Rome when performing the then-unknown Beatles music in Ukraine with his makeshift band.

He said his first foreign trip was to Canada and he described how he descended from the rarified oxygen-depleted air in Ukraine down to sea level in the West, where his lungs could breathe fully and freely. There, he was introduced to Pink Floyd, Led Zeppelin and Western culture.

Mr. Vakarchuk spoke movingly of a conversation with his father when he told him that he was giving up his fledgling career in physics to pursue his passion for music instead. His father, a physicist who was rector of Lviv University and minister of education, was very philosophical and supportive. Contrary to the traditional inclination of Ukrainian parents to prescribe what is best for their children, Ivan Vakarchuk simply advised his son to be careful and deliberate, and to do everything that he needed to do to be happy.

The musical segment of the program in New Haven started with a surprise: an enthusiastic flash mob of fans dressed in “I Love Slava” T-shirts who performed synchronized movements and gestures to the rousing tune of “Vstavay, Moya Myla, Vstavay.” This was followed by projecting selected popular music videos on a very large screen, with Slava commenting before and during the videos.

Of particular note were two videos: “Ne Tvoya Viyna” (Not Your War) and his most recent video “Myt” (An Instant) made in New York City on November 1, 2015, for his upcoming new album.

“Ne Tvoya Viyna” is often misunderstood. It is really about wars imposed on Ukraine for reasons that were beyond the country’s control and for someone else’s cause. According to Mr. Vakarchuk, the history of Ukraine is replete with human suffering because of other powers’ policies. The wars resulting from the Bolshevik Revolution, World War II and the latest war in Ukraine’s east are examples.

The song “Myt,” written in the dark and snowy days of February 2015, is an emotional tribute to a dying Ukrainian soldier in the eastern battle zone. In his final moments, the soldier movingly recalls his childhood, his close relationship with his father, his faith and his first love. Mr. Vakarchuk said he wrote this song quickly in the middle of the night, unable to sleep because of that day’s latest casualties reports from eastern Ukraine.

But the song felt unfinished. It didn’t have an appropriate ending note, he related. But one came in the most unlikely way.

In the summer, while undergoing treatment in a hospital, Mr. Vakarchuk was forewarned by doctors that a severely wounded soldier who miraculously survived four days lying wounded in the snow was to be admitted next to him. The soldier had undergone multiple amputations made necessary by the effects of frostbite.

Dreading the encounter, Mr. Vakarchuk braced for the worst. But it was not what he expected. Much to his surprise the soldier was radiant and outgoing. He greeted Slava warmly with good humor – he was full of light, optimism and energy, so happy just to be alive. Mr. Vakarchuk said he was taken aback. In his heart, he understood immediately how he needed to end the song of tribute to the dying soldier that he had written back in February.

The unexpected encounter and emotional turn provided the grist for the closing line of this very powerful and sad, yet hopeful song. “Myt” had more than 1 million views on YouTube when it was released on December 4 of last year.

In one interesting exchange with the audience inside St. Michael’s hall, Mr. Vakarchuk was encouraged to return back to politics (he had served briefly in the Verkhovna Rada before quitting because of corruption) and to run for president in the next election. In fact, a recent poll showed disillusionment with the present government and Mr. Vakarchuk polling at the top of potential presidential candidates. Mr. Vakarchuk responded with a question: What is the common person and average citizen doing to improve matters?

As Mr. Vakarchuk sees it, the persistent hope for a messiah is a self-imposed barrier that stands in the way of Ukraine’s success as a nation. In his opinion, the collective effort of many is necessary to effect change. Many civic activists need to engage and play a role to improve conditions. That is how America was built. That is the only path for Ukraine.

Also during the fund-raising event, Dr. Larissa Kyj, president of the United Ukrainian American Relief Committee (UUARC), addressed the audience about the UUARC’s mission, specifically about how its Orphans of Maidan and ATO Fund is being administered.

Danuta Votus from the Ukrainian community of Hartford described the fund-raising efforts of northern Connecticut communities geared toward helping the orphans.

For more information or to donate to this worthy cause, readers may visit the UUARC website at UUARC.org. 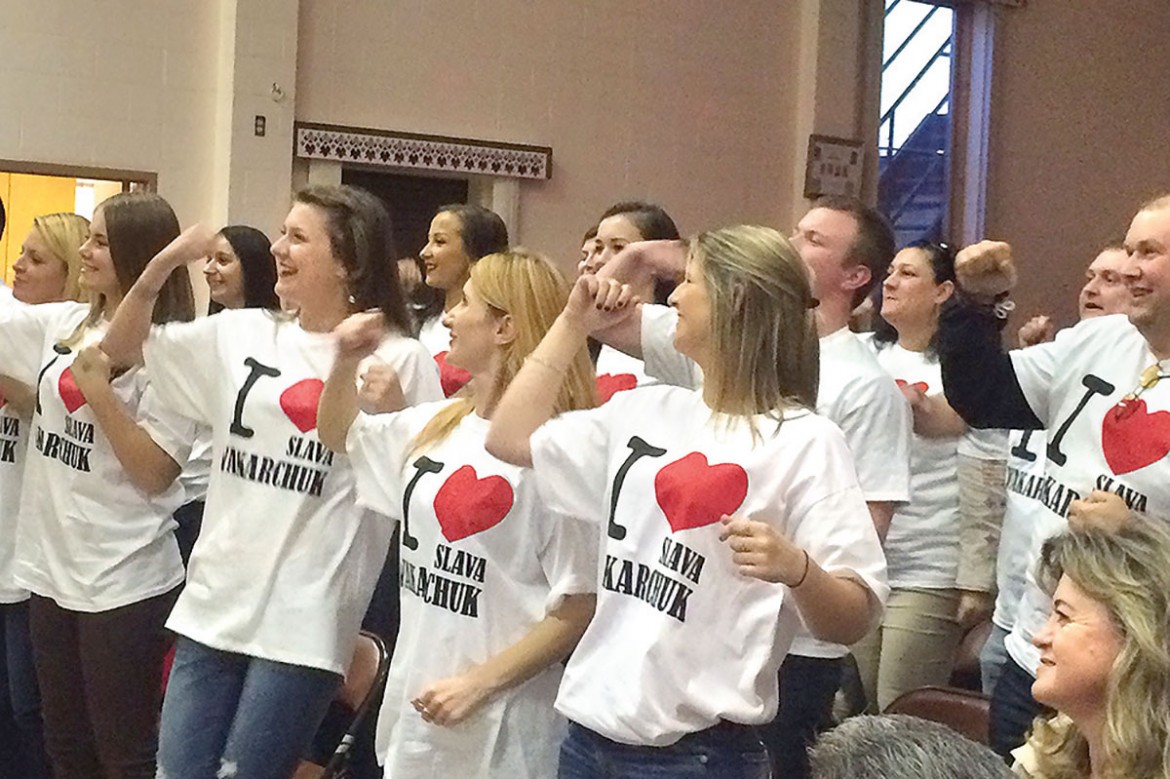