NEW YORK – Yara Arts Group and The Ukrainian Museum in New York presents a series of virtual events this fall on world epic song traditions and the work of Zenoviy Shtokalko, who brought the Ukrainian epic songs (dumy) to New York in the 1950s. 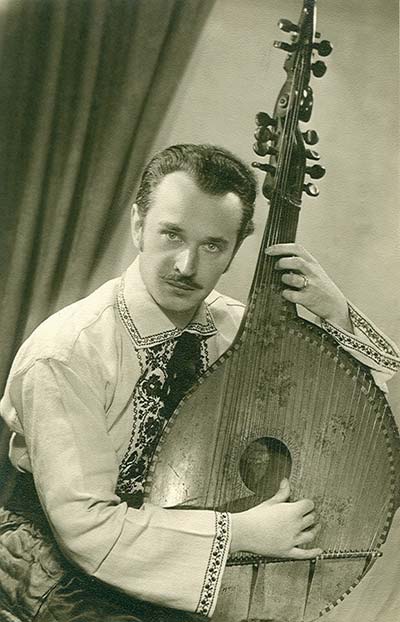 “Yara’s Traditional Music: Bandurist Zenoviy Shtokalko” is a four-part series on Shtokalko’s performances of Ukrainian dumy, his instrumental music for the bandura, his development of narrative songs and his modernist writings. Hosted by Julian Kytasty and Virlana Tkacz, the events feature special guests from the United States, Canada and Ukraine. They will be live-streamed in September and October. After their premieres, they can be seen anytime on www.yaraartsgroup.net Yara’s virtual events are all free and bilingual (Ukrainian English).

Shtokalko was an immigrant from Berezhany, Ukraine, and a virtuoso bandura player who came to New York in the 1950s. He recorded several records for Surma, most of which were released after his death in 1968. He also left a treasure trove of basement tapes, which have influenced major bandura players in New York and Ukraine.

In July 2020, Yara created a virtual event that was an introduction to Shtokalko’s work. Ms. Tkacz told his story, while Mr. Kytasty, a master bandura player, shared recordings and played work influenced by Shtokalko. This event can be seen on www.yaraartsgroup.net

The Kyrgyz have preserved the largest number of known living epic songs. Yara’s Kyrgyz epic event will feature Kenzhegul Satybaldieva and Nurbek Serkebaev singing excerpts of such Kyrgyz epics as “Janyl Myrza” and “Er Toshtuk.” This August Yara created the virtual event “Kyrgyz Epic at La MaMa: Yara’s ‘Er Toshtuk.’ ” The artists who created the show “Er Toshtuk” in Bishkek with Ms. Tkacz and Ms. Satybalbieva told how they created a modern theater production based on an old Kyrgyz epic and brought it to La MaMa in 2009. This virtual event is bilingual (Kyrgyz-English), with video clips and many photographs, so it is accessible to all. It can be seen on Yara’s webpage.

Yara has also invited morin khoor player Dimitri Ayurov to sing Buryat Mongolian epic songs and hopes other artists who perform epic songs from throughout the world will join the festival virtually.

“Yara’s Traditional Music Series” is made possible with public funds from the New York State Council on the Arts, NY Bandura/Bandura Downtown and friends of Yara Arts Group. For more information see: www.yaraartsgroup.net.