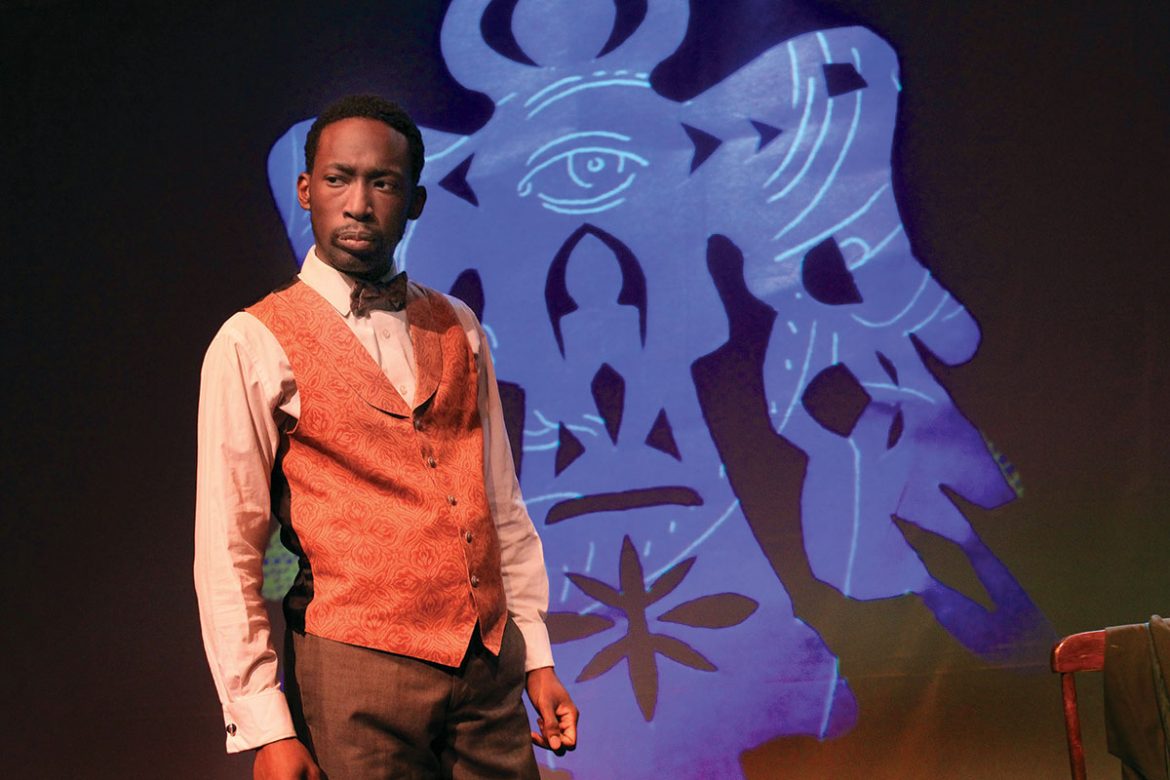 Two years ago when we were all celebrating the bicentennial of Taras Shevchenko’s birth, Yara Arts Group launched on a special project to create a new theater piece that would use Shevchenko’s poetry, but also would reveal a side of the artist we usually don’t see.

Yara’s “Dark Night Bright Stars” recreates the meeting of Shevchenko (1814-1861), the great Ukrainian poet and painter, and Ira Aldridge (1807-1867), the African American actor who was much honored in Europe. The two great artists, who rose up from serfdom and slavery, could not speak to each other directly, but they found a common language in art and song. Their meetings were documented in the diary of Count Tolstoy’s 15-year-old daughter, Katya (Ekaterina Tolstoy Yunge), who sometimes acted as their translator.

Communication without translation is at the heart of the show that I created with the cast. Paradoxically, the production places focus on the word, providing it with great depth and multidimensionality. The characters exchange only a few important words – revealing the multiplicity of meanings that usually escapes us in ordinary speech. Words like “mama,” “home,” “beautiful” and “friend” acquire the kind of depth of meaning found only in poetry.

We all know that Shevchenko, the bard of Ukraine, was born a serf near Kyiv and grew up in absolute poverty. His talent as a painter was recognized by a group of artists in St. Petersburg who helped buy his freedom. He studied painting at the Academy of Art, but also wrote poetry in Ukrainian, some of which was very critical of the tsar. He was arrested and sent to serve 25 years in Central Asia. But few know that he was freed after 10 years through the intercession of Count Tolstoy, who introduced him to Ira Aldridge, an African American actor who had left the U.S. to perform Shakespeare in Europe and Russia. During their meetings in 1858, Shevchenko drew his famous portrait of Aldridge. In the process they became close friends.

In our show “Dark Night Bright Stars,” art becomes an additional means of communication. We expand the source material of Ekaterina Tolstoy Yunge’s diary with poems by Shevchenko, which I translated with Wanda Phipps, and excerpts from Shakespearean roles we know Aldridge performed in St. Petersburg. The selection of poetry by Shevchenko deeply resounds with contemporary events, as do Aldridge’s monologues and Shevchenko’s paintings.

Julian Kytasty created an original musical score for our show that quotes traditional Ukrainian folk songs that Shevchenko knew, as well as songs from the AME Zion Church hymnal, a church that Aldridge’s father attended.

In the spring of 2014 we presented a developmental reading of “Dark Night Bright Stars” at La MaMa Theater. Then the U.S. Embassy brought us to Ukraine to perform at the American Festival in Odesa, and experimental theaters in Lviv and Kyiv. We were in Ukraine right after the events of the Maidan, and performed in Odesa only two days before the riots and horrendous fire. Yet people packed our performances.

The critic for Kyiv’s Kino-teater wrote: “the play of images in the show is so rich… it is about the power of words and the power of art. The sensitive selection of poetry by Taras Shevchenko deeply resounds with a contemporary audience in the context of the ‘discussed’ yearning for the homeland.” 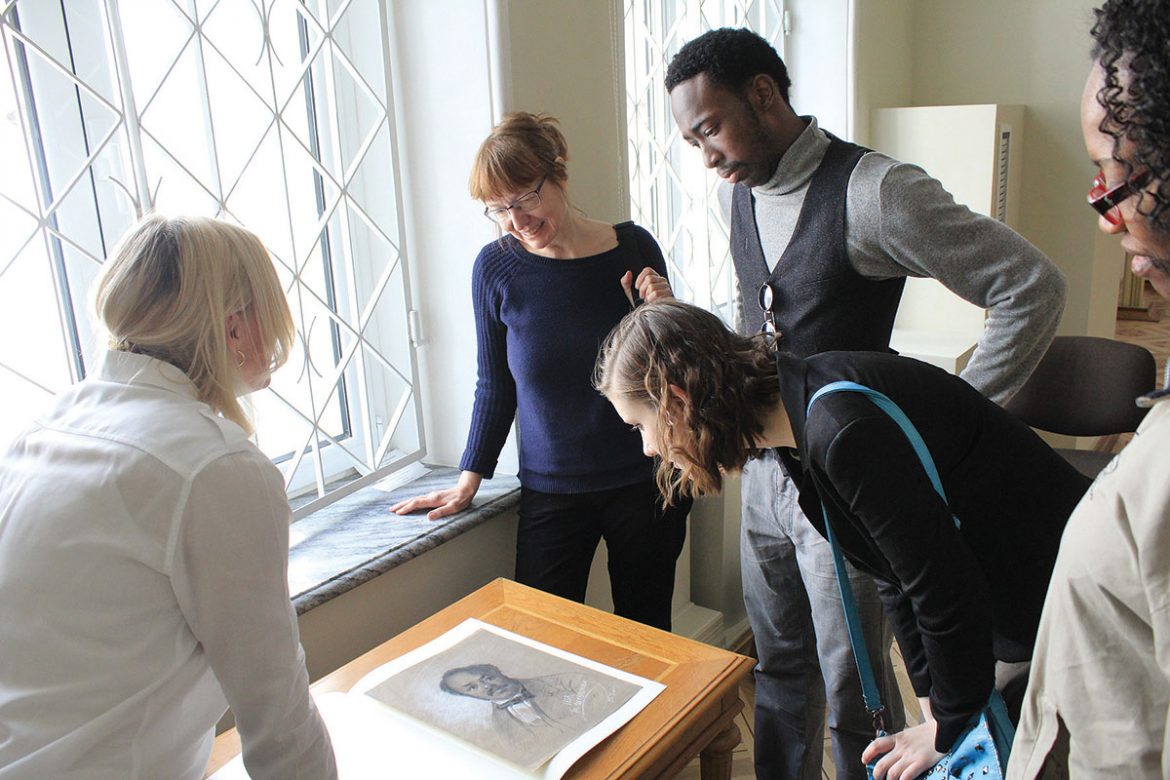 Lviv’s Anastasia Kanarska added: “Yara showed us its own and our own Shevchenko… This was not Shevchenko the icon, but a portrayal of Shevchenko the living, emotional and fierce artist, who wanted to create and who also dreamt of returning home. Director Virlana Tkacz looked beyond the stereotypes that usually envelop this artist. The memoirs of Katerina Yunge-Tolstoy fell into her hands at the right moment, allowing her to find her own way and create a real, unpretentious but elegant, flower to add to our anniversary bouquet for Taras.”

When we were in Kyiv, we visited the Shevchenko Museum with our cast and were able to see the original pastel drawing of Aldridge in the museum archives. Jeremy Tardy, who plays Aldridge, and Shona Tucker, who plays his mother, told me they had seen reproductions of this portrait in various African American history books. But it was a special treat to see the original and to look at it so closely. When we returned from Ukraine, we were able to present one showing of our theater piece at The Ukrainian Museum in New York, surrounded by Shevchenko’s art.

In the fall of 2014, Yara created a special event at The Ukrainian Museum that focused on Shevchenko’s portrait of Aldridge then on exhibit. Writing in The Ukrainian Weekly (November 16, 2014), Mary Kalyna called it “One of the more original and thought-provoking tributes during the Shevchenko bicentennial year.” She continued: “In a coup for Yara Arts Group and a special treat for the audience, the program was introduced by Broadway star André De Shields… [who] highlighted the debt that he and all African American actors have to the trailblazing Aldridge, calling him the ‘father of the dream’ that Dr. Martin Luther King Jr. spoke of in 1963.” I had tears in my eyes as Mr. De Shields read our translation of Shevchenko’s “Letter to My Countrymen Dead, Alive and Not Yet Born,” bringing new depth and universality to a poem I had heard so many times before.

Our event also included a lecture by Prof. Bernth Lindfors from the University of Texas, the foremost scholar on Aldridge, who spoke about the historical context of the Shevchenko-Aldridge meeting.

Now we are rehearsing and preparing to premiere our expanded production of “Dark Night Bright Stars” at La MaMa Experimental Theatre in New York. Our cast includes: Sean Eden as Shevchenko; Maria Pleskevich as Katya Tolstoy; Jeremy Tardy as Aldridge; Shona Tucker as his mother Luranah; her son Barak Tucker as the young Aldridge; and Julian Kytasty as the Kobzar. Our set and lights are designed by Watoku Ueno. The costumes are by Keiko Obremski. Projections are by Waldemart Klyuzko, who was nominated for a New York Innovative Theatre Award for his work on Yara’s “Raven.”

Since 1990 Yara Arts Group has created 34 international collaborative cultural projects with contemporary and traditional artists from Eastern Europe, Central Asia and Siberia. These include: “Blind Sight,” about a blind Ukrainian writer who became a Japanese writer in 1914; “Circle,” with Buryat artists from Siberia and Gogol Bordello; “Swan” and “Raven,” based on poetry by Oleh Lysheha; “Er Toshtuk” based on a Kyrgyz epic; “Scythian Stones,” with Nina and Tonia Matvienko; and the recent “Hitting Bedrock,” about the war in Ukraine’s east.

La MaMa E.T.C. will present the American premiere of “Dark Night Bright Stars” on June 3-19 in its First Floor Theater at 74 E. Fourth St. in Manhattan. The production is made possible with public funds from the New York State Council on the Arts, New York City Department of Cultural Affairs, as well as Self-Reliance New York Federal Credit Union and friends of Yara Arts Group.