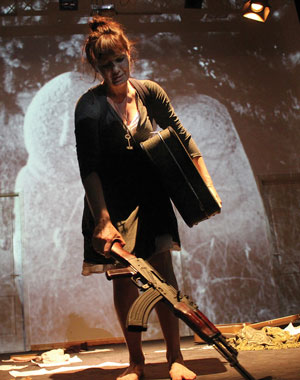 NEW YORK – The Ukrainian Museum and Yara Arts Group on January 24 will open “Yara at 25: Looking Back/Moving Forward,” a museum exhibition that is both a retrospective of Yara’s theatrical work and a look into the future.

The exhibition includes costumes, instruments, photographs, props and videos from Yara’s productions at La MaMa Experimental Theater in New York, and from performances and research expeditions in Ukraine, the Buryat Republic in Siberia, Kyrgyzstan, China and Japan. The exhibition opens on Saturday, January 24, at 7 p.m. at The Ukrainian Museum, 222 E. Sixth Street in New York City.  It continues through March 1.

Yara was born on February 25, 1990, when a group of New York artists creating an original Theater piece about Les Kurbas – an experimental and influential theater director in 1920s Kyiv – decided to celebrate his birthday. The show “A Light from the East” incorporated the diaries of Kurbas with poetry and the dreams of the young Yara artists. It was developed at La MaMa Experimental Theater and premiered in November 1990. The piece was created anew in Ukraine as “In the Light,” and opened in 1991 at the Franko National Theater in Kyiv the very week that the Soviet Union collapsed. Ellen Stewart, legendary La MaMa founder, joined the group in Kyiv and Yara became a resident company of La MaMa.

Since then, Yara has presented a wide range of theatrical works, musical and literary events, workshops, art and photography exhibits and lectures, and has published six books.

Yara Arts Group has been directed for 25 years by Virlana Tkacz, who was named Honored Artist of Ukraine in 2007, one of the few American-born artists to receive this distinction.  Under her direction Yara has staged over 30 original theater productions at La MaMa Experimental Theater, Harvard Summer School and throughout Ukraine, Siberia and Asia, in addition to regularly holding festivals and events at the Ukrainian Institute and The Ukrainian Museum in New York.

A special concert, “Yara at 25,” will take place on Friday, January 30, at 7 p.m. at The Ukrainian Museum. The evening will feature Yara actors performing poetry from the shows in their signature style, interweaving the original text with its translation, the two languages entering into dialogue with each other.  Julian Kytasty, well-known bandurist and music director of many Yara productions, will perform works from Yara’s shows with other musicians. Wanda Phipps, poet and Yara’s dramaturg, will read her own works.

On Saturday, January 31, La MaMa’s “Coffeehouse Chronicles” will feature Yara Arts Group at an event that is part artist portrait, part history lesson. This is part of the series exploring the history of La MaMa from “Coffeehouse Theater” of the 1960’s to today. The event will include a panel discussion led by Svitlana Matviyenko with Ms. Tkacz, Wanda Phipps and Watoku Ueno, as well as live performances from Yara’s past shows, archival material and video. This free event is curated by Michal Gamily at La MaMa, 74A E. Fourth St., at 3-5 p.m.  (see lamama.org.)

“Yara at 25: Looking Back/Moving Forward” was made possible with public funds from New York State Council on the Arts, New York City Department of Cultural Affairs, Material for the Arts, as well as by Self-Reliance (NY) Federal Credit Union, the Coca-Cola Co. and the friends of Yara Arts Group.

Tickets for “Yara at 25” are available for each event at the door. The exhibition itself is free with museum admission. For further information call The Ukrainian Museum, 212-228-0110, or Yara, 212-475-6474. For a current schedule, visit the website at www.brama.com/yara.