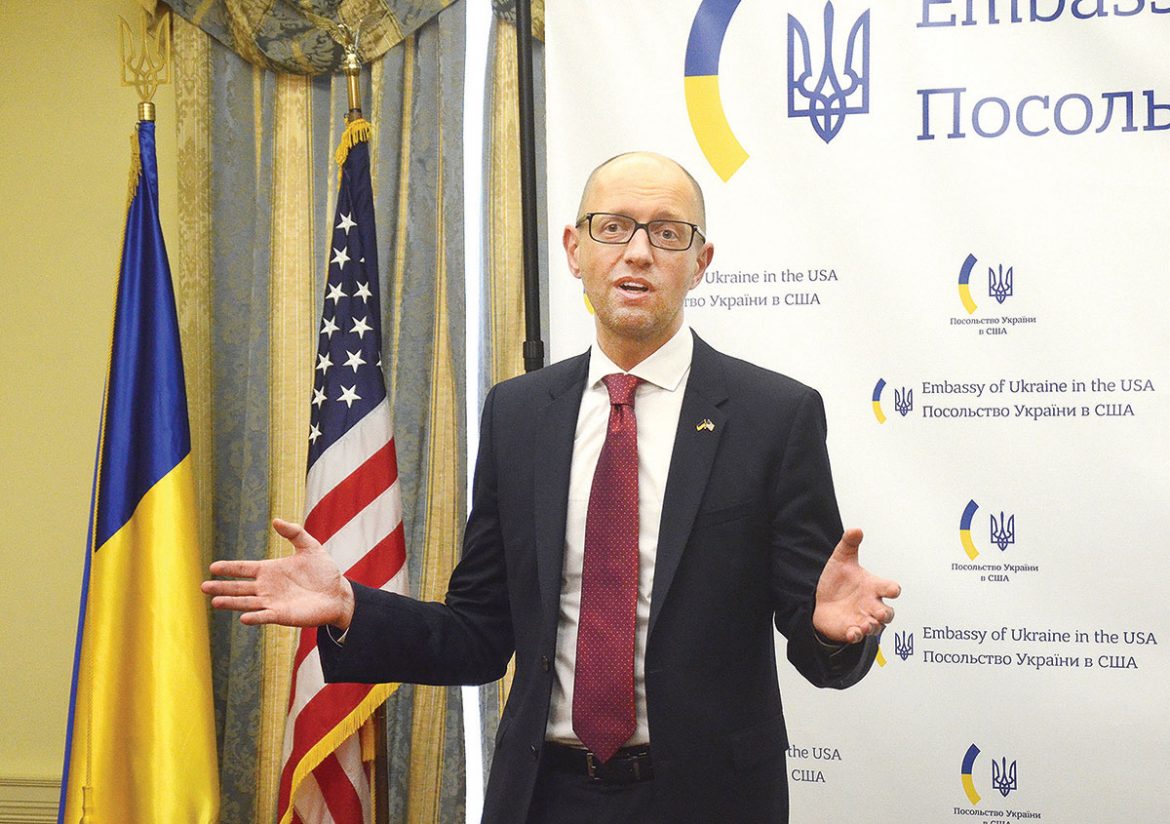 Participating in the celebration of the 20th anniversary of the Ukrainian Constitution at the Ukrainian Embassy in Washington, Arseniy Yatsenyuk makes the point that it “definitely needs to be improved.”

WASHINGTON – Arseniy Yatsenyuk, the leader of Ukraine’s People’s Front party and – until two months ago – his country’s prime minister, visited Washington in the last week of June for talks with U.S. government officials and organizations involved and interested in Ukraine’s positive development.

And, as did his successor, Prime Minister Volodymyr Groysman on his first visit here two weeks earlier, Mr. Yatsenyuk met with Vice-President Joe Biden, thanking the U.S. government and people for their support of Ukraine and asking that they continue their assistance in the future.

Following his meeting on June 28 with Vice-President Biden – “ a friend of mine and a great friend of Ukraine” – Mr. Yatsenyuk stressed that “American leaders have done a lot for Ukraine.”

The United States, he said, was “among the first who stood up to defend the territorial integrity and independence of Ukraine,” invested “billions of dollars” in the Ukrainian economy and supported the Ukrainian people. The main message that he heard from the vice-president, he said, was that now much depends on the Ukrainian leadership and politicians.

“We must continue the course of reforms we started two years ago,” Mr. Yatsenyuk said, adding that Ukraine will receive help “only if it keeps demonstrating progress every single day.”

Before his stop at the White House, Mr. Yatsenyuk visited the Holodomor Memorial to pay his respect to the millions of Ukrainians who died during Joseph Stalin’s genocidal famine in Ukraine in the 1930s.

And that evening at the Embassy of Ukraine he participated – along with Ambassador Valeriy Chaly, U.S. Court of Federal Claims Judge Bohdan Futey and leaders of Ukrainian American organizations – in the celebration of the 20th anniversary of Ukraine’s Constitution.

Commenting on the Ukraine’s constitutional history, the beginning of which, as Ambassador Chaly and Judge Futey noted in their remarks, predates that of the U.S. Constitution, Mr. Yatsenyuk stressed that Ukraine’s Constitution today “definitely needs to be improved.”

“We need a real division of powers in my country,” he said. “Everyone is to be accountable and to be responsible.”

He praised the American people and government for their support “in our fight against the Russian-led aggression” in Ukraine, characterizing that support as “a true commitment for a free, prosperous and strong Ukraine.”

A lot has already been done, and much more remains to be done in Ukraine, Mr. Yatsenyuk said, expressing his firm belief that the next administration will be as committed, strong, bold and supportive of the Ukrainian people as was the previous.

Mr. Yatsenyuk’s Washington visit began on June 27 with a meeting with U.S. Treasury Secretary Jack Lew. Later that evening, he witnessed a preview screening at the Woodrow Wilson Center of “The Breaking Point – The War for Democracy in Ukraine,” a newly produced documentary film by the three-time Academy Award-winning director Mark Jonathan Harris.

Before the conclusion of his visit on June 30, he had an open discussion at the Atlantic Council, a prominent international affairs think thank in Washington, during which he responded to many questions about Ukraine’s internal affairs and foreign relations, especially with the United States and Russia.

Participating in the celebration of the 20th anniversary of the Ukrainian Constitution at the Ukrainian Embassy in Washington, Arseniy Yatsenyuk makes the point that it “definitely needs to be improved.”

He pointed out that the United States has provided “unwavering support to the Ukrainian people,” was “the flagship in imposing sanctions against the Russian Federation,” has provided $3 billion of treasury guarantees to the Ukrainian financial sector, launched training and equipment programs for the Ukrainian military and national guard, and provided much technical support for reforming the Ukrainian banking sector, justice and police departments.

“These are real commitments,” he underscored.

Mr. Yatsenyuk acknowledged that Washington has plenty of world issues on its radar screen, among them terrorism, the world refugee crisis and nuclear proliferation. “And no doubt that the U.S. will try to find some kind of way of communication with the Russian government,” he said. “But what I am sure about,” he stressed: “It will happen not at the price of Ukraine.”