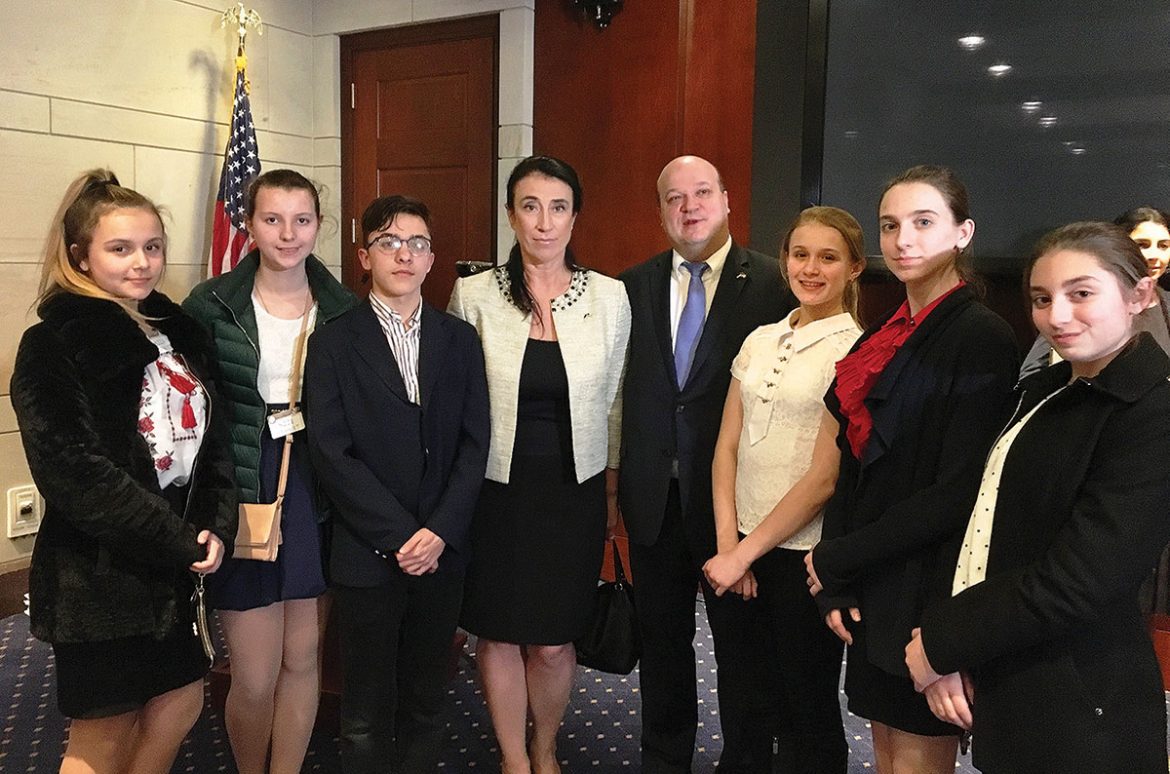 In Washington (from left) are: Juliana Babycheva, Anna-Liza Medynska, Adrian Kebuz, Liudmyla Mazuka (the Ukrainian ambassador’s wife), Ambassador Valeriy Chaly, Diana Savchyn, Anastasiya Stolyarchuk and Natalie Hrytsay. The students are in the seventh through ninth grades of the Ukrainian Heritage School of Philadelphia.

JENKINTOWN, Pa. – On March 8, six members of the American-Ukrainian Youth Civics and Public Policy Club, a program of the Ukrainian Heritage School of the Philadelphia area, traveled to Washington to participate in Ukrainian Days, an advocacy event organized by the Ukrainian National Information Service (UNIS) of the Ukrainian Congress Committee of America (UCCA).

Our first taste of the life of politics in Washington was a briefing session about the purpose and strategy of Ukrainian Days. Presentations by two prominent foreign affairs specialists, former U.S. Ambassador to Ukraine John E. Herbst (currently the director of the Dinu Patriciu Eurasia Center of the Atlantic Council) and Ambassador William Courtney (currently adjunct senior fellow of the RAND Corporation), laid a factual and foreign policy-oriented foundation for UNIS Director Michael Sawkiw’s review of pertinent bills that the Ukrainian American community is striving to pass through Congress. He reviewed the arguments and talking points that support them. Sustaining and deepening sanctions against Russia and the supply of defensive military weapons to Ukraine were paramount goals. Attorney Eugene Czolij, president of the Ukrainian World Congress, also addressed the advocates in attendance, offering his greetings, and his thoughts and suggestions.

The purpose of Ukrainian Days was to advocate immediate action concerning the crisis in Ukraine, to develop closer communications between the Ukrainian American community and members of Congress, and to secure economic, military, social, humanitarian and political aid for our ancestral homeland.

We traveled with fellow advocates from throughout the United States to meet with members of Congress and/or their staffers, in order to discuss pending bills and resolutions that favor Ukraine. Representatives of the Crimean Tatar, Syrian American, Baltic and other Central and Eastern European nations joined us. Our club members travelled with the delegations from Pennsylvania, New York and New Jersey.

The matters that we presented to the senators we visited included bills and resolutions that, if passed, would ensure that Ukraine receives ongoing U.S. assistance; that America will not recognize Russia’s unlawful annexation of Crimea; that sanctions against Russia will remain in place; that the U.S. condemnation of Russian hostilities remains part of America’s foreign policy; and that America’s partnership with Ukraine is reinforced. They would also authorize stronger sanctions against Russia and defensive military weapons assistance for Ukraine.

Shortly after Ukrainian Days, Sen. Toomey from Pennsylvania, a member of the Senate Ukraine Caucus, became an original sponsor of S. Res. 100, Condemning Illegal Russian Aggression in Ukraine, which urges the president to approve financial and military aid to Ukraine and calls on Russia to end the occupation of Crimea, to cease military aggression in Ukraine and to abide by the Minsk II accords. In addition, the House Banking Committee, on which Sen. Toomey serves, has undertaken hearings on tightening financial sanctions against Russia.

The office of our home state’s other senator stated that Sen. Casey, also a member of the Senate Ukraine Caucus, would join Sen. Toomey in co-sponsoring and supporting all of the above bills and resolutions.

After a full day of meetings, we attended the Friends of UNIS reception, at which we heard words from Mr. Sawkiw, Mr. Czolij, UCCA President Andrij Futey, Ukraine’s Ambassador to the U.S. Valeriy Chaly, Connecticut Sen. Chris Murphy, Maryland Rep. Andy Harris and Ohio Rep. Marcy Kaptur, co-chair of the Congressional Ukrainian Caucus. Rep. Kaptur received a Friends of UNIS award, while Sen. Murphy received the prestigious Shevchenko Freedom Award. We, as a group, made it a point to introduce ourselves to all of these dignitaries and to engage them in discussions.

Spending the day in Washington, meeting congressmen and senators, and discussing U.S. relations with Ukraine has sparked my interest in pursuing a career in politics, especially in diplomacy or foreign affairs. I have always had an interest in foreign nations and their politics, but, until we visited Washington, I never really thought I could pursue a career in the field, that I could meet the right people, and receive advice and encouragement from them.

Words cannot express how thankful I am to be a part of the Ukrainian American Civics and Public Policy Club and for the experience and opportunities that it has given me. Attending Ukrainian Days is not going to be our club’s last visit to Washington. In fact, we plan to visit our capital as frequently as possible. We encourage all those who are reading this article, actively to advocate the above bills to their U.S. representatives and senators.

I thank my fellow club members and moderators for the work they have done and the impact they have had on my life.

Anastasiya Stolyarchuk, 14, is a ninth-grade student at the Ukrainian Heritage School of Philadelphia and at Tamanend Middle School in Warrington, Pa.