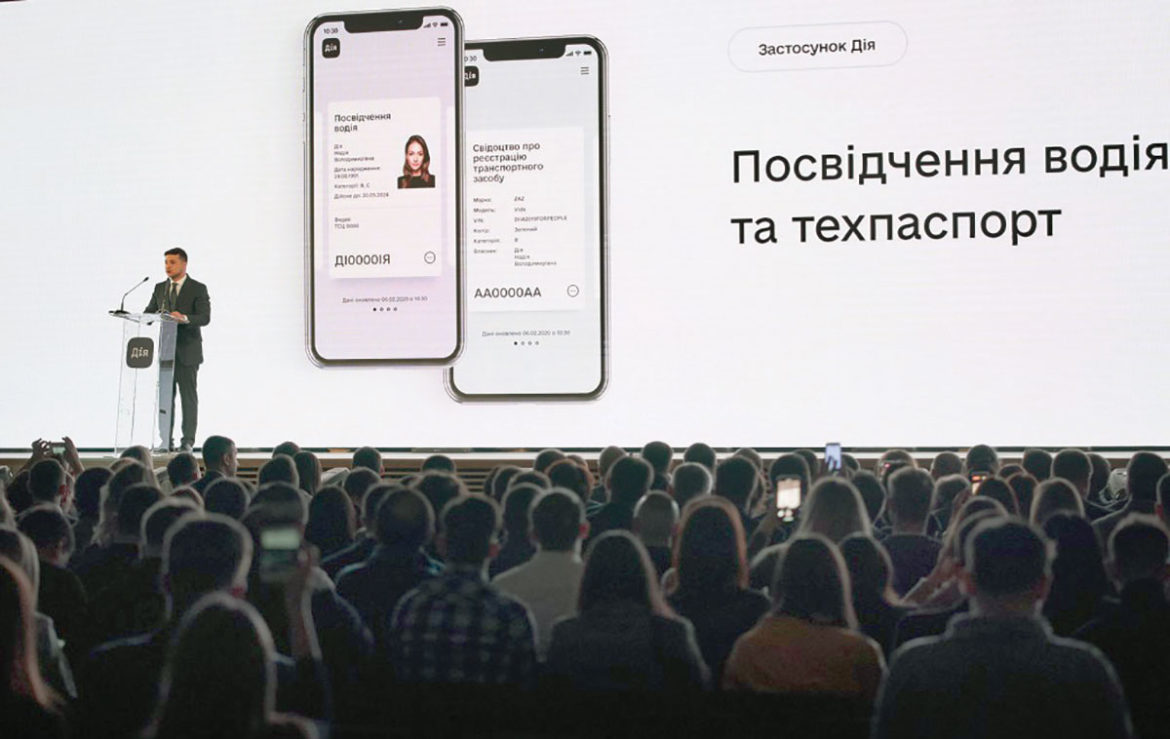 More than 1 million Ukrainians downloaded this mobile app in the first four days after the grand presentation, which was attended by nearly a dozen ministers and senior officials of the Presidential Office. The event took place in Kyiv’s Parkovy International Convention Center and was a by-invitation-only event. Due to the fact that almost all of the county’s leadership was in the same place at the same time, security measures were at a high level.

“For citizens, the government should be just a service – simple, but more notably  comprehensible,” Mr. Zelenskyy said at the beginning of the Diia presentation. “In general, our goal is to make sure that all relations with the state can be carried out with the help of a regular smartphone and the Internet. In particular, voting. This is our dream, and we will make it real during presidential, parliamentary or local elections. It is a challenge. Ambitious yet achievable,” Ukraine’s president confidently proclaimed. Mr. Zelenskyy had often spoken about the State in Smartphone concept in the first half of 2019, and this presentation showed the results of his team’s work.

The brand and concept of the app were unveiled on September 27, 2019, in Kyiv. It was announced as an application and a portal that would unite in a single electronic window all the services provided by the state to citizens and businesses. In December 2019, test access to the application was opened for the first 5,000 who applied for the beta testing.

During the presentation, Mr. Zelenskyy congratulated Minister of Digital Transformation Mykhailo Fedorov on achieving these results in such a short term. Mr. Fedorov was acknowledged several times during the presentation as the main driver of Ukraine’s digitization, however, he was not able to attend the event and present Diia due to illness.

The minister’s health issues were said to be the main reason the presentation had been postponed for a week. It was first scheduled for January 30 in order to start the application in the first month of 2020. Another possible reason the event was postponed is that the Diia app was not completely ready in time, according to one of the ministry’s contractors. Eventually, Mr. Fedorov’s illness was the official reason cited.

“We have the most important thing – talented people capable of achieving a goal, making changes. People say that political will is also required for that. I have it. Hence, we will have an e-country,” Mr. Zelenskyy underscored. “The Diia mobile app is now available on the App Store and Google Play. From now on, 9 million Ukrainians can use their driving licenses and vehicle registration certificates in their smartphones… Ukraine has become the third country in Europe to have something like that,” Mr. Zelensky added.

However, Minister of Internal Affairs Arsen Avakov later corrected the president and said that Ukraine had become not the third, but the fourth European country with that kind of service. Mr. Avakov’s presence on the same stage as President Zelenskyy and Prime Minister Oleksiy Honcharuk belied rumors that the hated minister is to be dismissed in the nearest future. The president had explained that Mr. Avakov’s appointment as the head of the Ministry of Internal Affairs was merely a temporary solution. The reason Mr. Avakov was involved in the new app’s presentation is that the first available functions in the Diia app are digital drivers’ licenses and vehicle registration certificates, which are subject to control by the Internal Affairs Ministry.

These two functions of the app are only the beginning of a larger e-governance project. The government has much bigger ambitions. “We have analyzed the most relevant services, the ones Ukrainians apply for most often, and we are going to digitize 50 of them already this year,” Prime Minister Honcharuk said during the presentation. Mr. Honcharuk also mentioned the Diia Digital Education national online platform created by EdEra, a Kyiv-based studio of online education.

The prime minister added that the government plans to teach 6 million Ukrainians digital literacy in three years. “Digital literacy is now at the heart of our country’s competitiveness in the world. This is a challenge we also take on. Over the next three years, we plan to teach at least 6 million Ukrainians to use and develop their digital skills. It’s a huge figure, huge ambition, but it’s something that brings us closer to the highest digital standards,” he said.

In the first four days since the launch of Diia, it was downloaded more than 1 million times. “We continue to be at the forefront of downloads of the Ukrainian App Store and Play Market,” Minister of Digital Transformation Fedorov posted on his Facebook page. “We are ahead of Tik Tok, Telegram, YouTube, Viber, Instagram, Facebook and WhatsApp… Without your active involvement, it will not be possible to build a digital country. Diia, as a service, works well. We were helped by the best IT company in the country. The problem is with how the data was collected all previous 29 years.”

By the end of the winter, a digital passport will appear in the app, which will allow users to travel domestically, conduct banking and use medical services. According to project manager Vladimir Brusilovskyy, the number of digital passport users could be around 10 million. Mr. Brusilovskyy said that the documents in the application should be checked using a QR code, which is valid for only three minutes. Users can check this code through the Diia app from another smartphone. He also recommended installing the Diia app only from official app stores and added that the ministry would work with marketplaces to combat clone apps.

Diia is one of Ukraine’s first Ukrainian e-governance projects. As noted at the presentation, this ambitious project is meant to help citizens in their everyday lives.