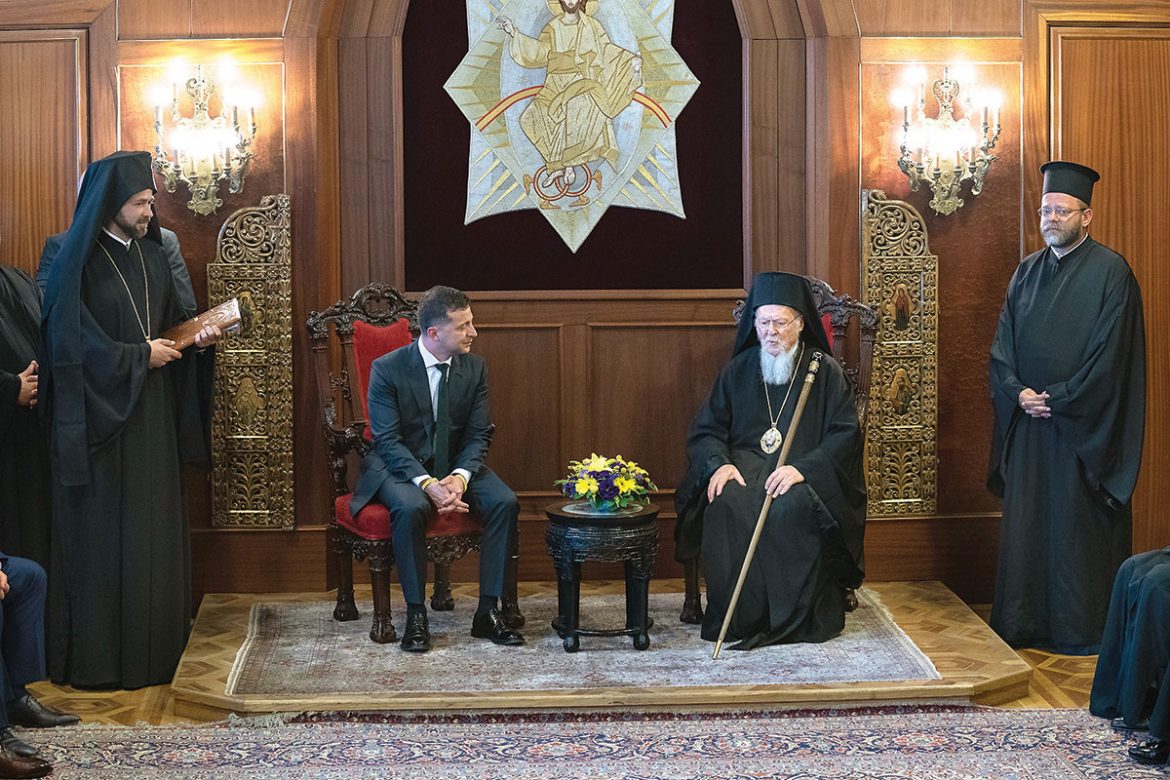 Ecumenical Patriarch Bartholomew hosts a meeting with President Volodymyr Zelenskyy of Ukraine at the Phanar during a working visit to Turkey.

PARSIPPANY, N.J. – President Volodymyr Zelenskyy met with Ecumenical Patriarch Bartholomew at the Phanar in Istanbul on August 8 while the president was on a working visit to Turkey.

Mr. Zelenskyy and Patriarch Bartholo­mew held a private meeting for more than one hour.

Patriarch Bartholomew, in his official greeting stated: “Your visit comes after the publication and promulgation of the Tomos of Autocephaly for the newly established Orthodox Church in Ukraine which, we request, will always have your high protection and your support for the world that has already begun in Ukraine. We from Constantinople [Istanbul], as we gave you baptism 1,031 years ago, so now we have given independence, the ability of your Church to carry out its work independently and unaffected by any outside intervention. Constantinople will not interfere with the internal affairs of the Church in Ukraine. She is completely independent and autocephalous. From here, from Constanti­nople, from the Phanar, she will only have a high protection and our continued prayers for the success of her work.”

“We send the blessing and love of the Mother Church of Constantinople, in the person of your dear Excellency, to the whole pious Ukrainian people,” the patriarch added.

Also in attendance were Metropolitan Emmanuel of France, Metropolitan Amphilichios of Adrianopolis, Archimandrite Joakim of the Holy and Sacred Synod, Deacon Gregorios and Archimandrite Michael, exarch of the Ecumenical Patriarchate in Kyiv.

Patriarch Bartholomew introduced the holy hierarchs present, and Mr. Zelenskyy introduced members of his staff. The meeting continued with a luncheon held in the Patriarchal Refectory, followed by a tour of the Patriarchal Cathedral of St. George led by Archimandrite Michael, who explained its history and the sacred relics kept there.

As noted by BBC Ukrainian, the meeting was initiated by President Zelenskyy and was seen as an affirmation of the good relations between Ukraine and the Ecumenical Patriarchate.

Mr. Zelenskyy thanked the patriarch for his support, saying, “Our common value is human life. This is the main thing for me, especially now, when I became the president of Ukraine. The authorities shouldn’t interfere in church affairs. I will defend the independence of the Church.”

However, it was expected that an agreement would be signed by both leaders during the visit. BBC Ukrainian reported that members of the president’s delegation declined to sign a document that was prepared at the Phanar in coordination with the Ministry of Foreign Affairs of Ukraine.  Typically, such an agreement would have an ecological theme, and it remained unclear why the prepared agreement was not signed.

Following the meeting, Mr. Zelenskyy did not meet with journalists who gathered at the Patriarchate.

“We spoke about all the disturbing things. I am very glad that we enjoy such strong support here not only at the political level,” Mr. Zelenskyy said before leaving the Patriarcahte, as reported by Ukrinform.

An official brief press release from the Office of the President of Ukraine stated that Patriarch Bartholomew supports Ukraine’s sovereignty and Mr. Zelenskyy thanked him for his support. “Government should not interfere in Church matters, and I defend the independence of the Church,” stated the press release.

Patriarch Bartholomew in a statement said: “Constantinople will not interfere in the internal matters of the Orthodox Church in Ukraine, as it is absolutely independent and autocephalous. From here – in Constantinople, the Phanar – the OCU is the sole highest authority and we offer our continued prayers for the success of its mission.”

“Your visit comes after the creation of the new Orthodox Church in Ukraine, and we ask that it always has your highest protection, as well as strengthen you in this matter as it has already strengthened for the Ukrainian people.”

Mr. Zelenskyy, as reported by the Patriarchal press service, commented that his visit with Patriarch Bartholomew was an honor and a joyous meeting.