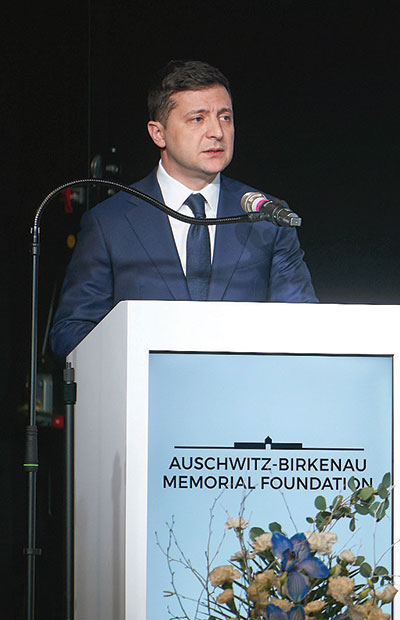 President Volodymyr Zelenskyy of Ukraine speaks in Poland on January 26 at a dinner marking the 75th anniversary of the liberation of the Auschwitz-Birkenau Nazi concentration camp.

KYIV – During the final days of January, Ukrainian President Volodymyr Zelenskyy carried out two sensitive “working visits,” to Israel and Poland. They were connected with the 75th anniversary of the liberation of the Auschwitz-Birkenau concentration camp located in Poland and International Holocaust Remembrance Day observed on January 27.

Given the broader context involving the role of Russian President Vladimir Putin, they were a veritable test for Mr. Zelenskyy’s diplomatic skills, both at home and abroad. And the commemorative events themselves revealed current attitudes towards the Holocaust in Ukraine where, according to the Ukrainian president, “one in four” of the total victims lived.

Matters were complicated by several simultaneous factors. First, the recent recriminations between Warsaw and the Kremlin over who was responsible for the outbreak of World War II. And secondly, that Israel organized a World Holocaust Forum on January 23-24 devoted to the 75th anniversary of liberation of Auschwitz concentration camp at which Mr. Putin was invited to speak, but not the leaders of Poland and Ukraine.

Poland’s President Andrzej Duda, who organized a similar event in Warsaw on January 27, refused to attend Israel’s commemoration on such terms and told Israeli media that Mr. Putin was spreading lies to conceal the Soviet Union’s responsibility for the war along with that of Nazi Germany. In this highly tricky situation, Mr. Zelenskyy bided his time and did not confirm whether he would be going to Jerusalem and Warsaw until the last minute.

While still preoccupied with the aftermath of a Ukrainian airliner’s downing in Tehran and the return of the bodies, President Zelenskyy nevertheless made his line known. The Times of Israel reported on January 19, after interviewing him in Kyiv, and on the day he announced he would be going to Israel: “He speaks at length about the Holodomor, the Soviet-imposed deliberate famine of 1932-1933, which killed millions, and with great respect for the victims of the Holocaust – and the need to bring a belated, honest historical account of these events into the open. He acknowledges but says less on the issue of Ukrainians’ participation in Holocaust crimes, preferring to highlight the actions of Ukraine’s Righteous Gentiles, and the relative marginality of overt anti-Semitism in modern Ukraine.”

In Israel, Mr. Zelenskyy adroitly pulled off a surprise maneuver. He met with the Israeli president, the prime minister, and the speaker of the Knesset and discussed not only the commemoration of the Holocaust with them but also enhancing bilateral relations. Then, even as speculation was mounting about a possible impromptu meeting with President Putin, he found a tactful way of not attending the main ceremony at all. According to the Jerusalem Post, he unexpectedly announced that he and his country’s delegation had given up their seats “to those who deserve them the most” – Holocaust survivors.

On President Zelenskyy’s return to Kyiv, his official website announced on January 26 that he would begin a two-day working visit that same day to Poland, which would also include a meeting with President Duda. He used it to participate in the international commemorations and also to strengthen ties with Ukraine’s neighbor to the West by aligning himself unequivocally with Poland in its current feud with the Kremlin.

“Being here on the International Holocaust Remembrance Day is very important to me,” President Zelenskyy said in a statement after meeting his Polish host in Oświęcim. “The Holocaust tragedy has left wounds in the hearts of Ukrainians forever. We will never forget that out of the 6 million Shoah victims, one in four was from Ukraine. We will never forget the horrific crimes that took place in Babyn Yar, when the Nazis executed more than 150,000 innocents.”

He mentioned the commander of the T-34 tank, Ihor Pobirchenko, who together with the crew first broke through the gates of the Auschwitz concentration camp, and the soldiers of the shock battalion of the 100th Lviv Division, who first entered the camp. Mr. Zelenskyy also stressed that almost 9 million Ukrainians – military and civilians killed in the second world war in the fight against Hitler’s regime – would never be forgotten.

President Zelenskyy noted that the honorary title of Righteous Among the Nations has officially been conferred on more than 2,500 Ukrainians, “people of a great heart and of the same great courage,” although there were many more people who saved Jews at the risk of their own lives. He stressed that he supported the recent call by the chief rabbi of Kyiv, Moshe Reuven Azman, to add the Ukrainian Greek-Catholic leader Metropolitan Andrey Sheptytsky to this list, viewing it as an “appeal for the restoration of historical justice.”

Judging from their statements at the joint meeting with the press, the talks between the Polish and Ukrainian leaders – their third meeting since Mr. Zelenskyy was elected president, were cordial and constructive, and marked further progress in putting aside differences over the past that have divided Warsaw and Ukraine.

“Andrzej Duda and I have openly discussed issues of the common past for the sake of the future,” the Ukrainian leader said. His host concurred that “many historical problems that hindered normal relations with Ukraine have now been resolved.” Apart from expressing their solidarity in standing up to Russia’s aggression and agreeing on the need to strengthen relations on all fronts, President Zelenskyy invited his Polish counterpart to visit Ukraine this year, while President Duda, in turn, proposed that in August they jointly mark the 100th anniversary of the Battle of Warsaw, when the allied troops of Jozef Pilsudski and Symon Petliura defeated the Bolsheviks.

This further warming of Polish-Ukrainian relations and President Zelenskyy’s de facto snubbing of the Russian leader has inevitably drawn the ire of the Kremlin. President Putin’s spokesman Dmitry Peskov said on January 28 that Moscow “categorically disagrees” with President Zelenskyy’s statement in Poland that Soviet collusion with Nazi Germany had led to the outbreak of World War II.

Facing the press alongside Mr. Duda, Mr. Zelenskyy said “the Poles were the first to feel the consequences of the criminal collusion of the totalitarian regimes. …This led to the start of World War II and allowed the Nazis to launch the lethal Holocaust machine.”

Mr. Peskov retorted: “We do not accept this statement. We consider it erroneous and offensive from the point of view of our grandfathers’ memory.”

Some Russian officials have gone as far as to say that Mr. Zelenskyy’s comments in Poland have undermined prospects for the renewal of a dialogue with Moscow. According to Agence France-Presse, Konstantin Kosachev, chairman of the Foreign Affairs Committee of the Russian Parliament’s upper house, accused the Ukrainian president of “delivering a blow to Russia-Ukrainian ties,” while Sergei Naryshkin, head of Russia’s foreign intelligence service, said he believes the Ukrainian leader is “getting increasingly drawn towards ideas of Ukrainian nationalism.”

Meanwhile, in Ukraine, the commemoration of International Holocaust Day stimulated further discussion about what it means, or should mean, for Ukraine and Ukrainians. What emerges from this is that, while anti-Semitism in Ukraine today may not pose a serious problem, much more needs to be done to raise awareness about what the Holocaust represents, to face up to its consequences and to memorialize the victims in a dignified way. Incredibly, after almost 30 years of independence, there are still numerous sites throughout Ukraine where old Jewish cemeteries and places of mass execution, neglected or consciously hidden away during the Soviet era, require identification and respectful maintenance.

Marla Raucher Osborn, an American lawyer who co-founded the Rohatyn Jewish Heritage, a Ukrainian NGO, as part of her 2019-2020 Fulbright project, noted: “of the 500-plus known Jewish burial sites in the three oblasts of historic Galicia of western Ukraine (Lviv, Ivano-Frankivsk, Ternopil), nearly 60 percent are places of wartime Jewish mass executions. But over 90 percent of the mass graves have no memorials to the victims – nothing. Memory of their location is often with locals only.” And this is only in the western part of the country.

On January 27 the Lviv scholar Oleksiy Panych posed this question in his blog for Ukrayinska Pravda: “Why should we remember the Holocaust?” Because, he reasons, this is part of defining who we mean by “we,” and more precisely “we, Ukrainians.” Our modern inclusive approach to building a Ukrainian political nation should no longer encourage us to think that in Ukraine the Holodomor killed only Ukrainians, or that the Holocaust is something that affected only the Jews, he pointed out.

In May 2019, at the inaugural international Kyiv Jewish Forum, Carl Gershman, president of the National Endowment for Democracy, gave the keynote address. “The current moment,” he said, “may offer an opportunity for Ukraine to build up a new national narrative that includes the experience of all the national and religious groups, and that accepts that the Holocaust and the Holodomor are part of a common Ukrainian history.” Observers note that this project, though well advanced, is still in the making.