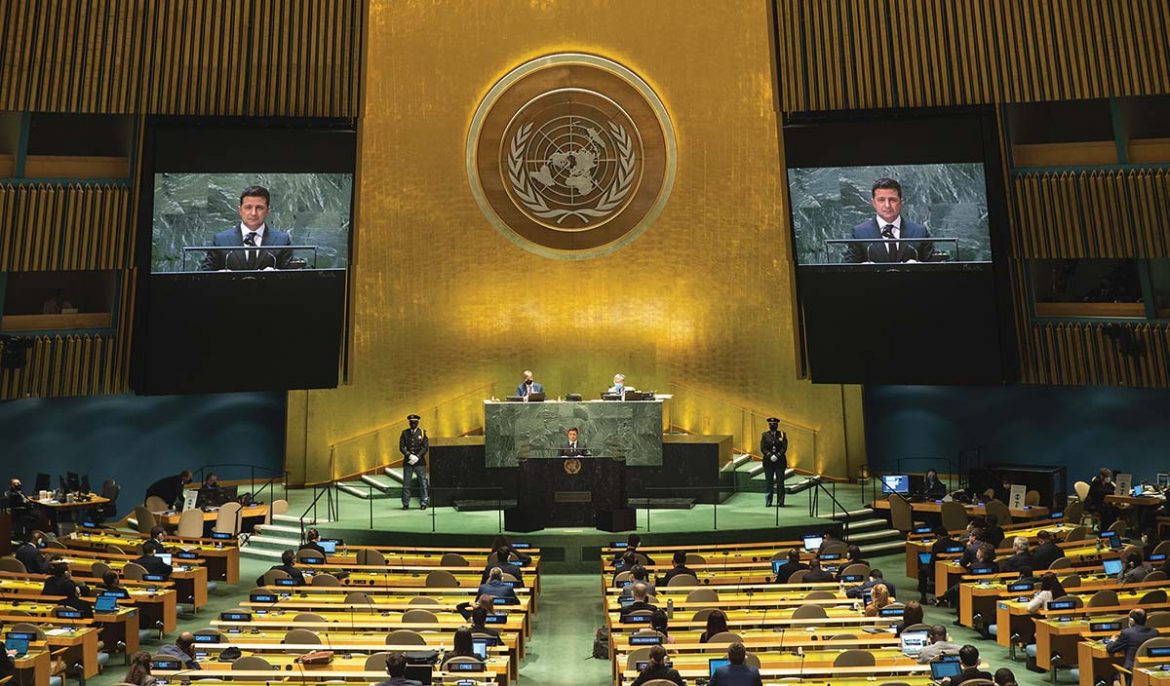 KYIV – Ukrainian President Volodymyr Zelenskyy delivered an impassioned speech at the 76th United Nations General Assembly in which he called on the world’s most prominent diplomatic convocation to do more to help end Russia’s war against his eastern European country.

Given on September 22 while back home assassins attempted to kill one of his top confidantes the same day, Mr. Zelenskyy told the assembly that it needs to live up to its mandate of maintaining peace and order throughout the world.

“And today the U.N. is like a retired superhero who has forgotten what he could do,” Mr. Zelenskyy said during his 22-minute speech. “He considers himself a burden, a weak, frail, useless old man, whose life was in vain. Or maybe the U.N. will remember something?”

Regarding the war in Ukraine’s two easternmost regions, which Russia has waged since April 2014, Mr. Zelenskyy offered to host the next U.N. meeting in a global conflict hotspot instead of New York where the international body is based.

Some 14,000 people have been killed in the two eastern regions, following Russia’s forcible seizure of Ukraine’s Crimean Peninsula earlier that year. An additional 1.5 million people have also been internally displaced as a result of the invasion in what is Europe’s only ongoing shooting war.

It was Mr. Zelenskyy’s third speech at the world’s most prominent diplomatic convocation since the former comedian and actor was elected in 2019.

The following day, the U.N.’s Office of the High Commissioner for Human Rights published its latest report about the violence caused by the war in eastern Ukraine.

There has been “a 51 percent increase in the number of civilian casualties, including the deaths of 13 people by ‘active hostilities,’ while dozens of injuries resulted from mine-related incidents and the handling of explosive remnants of war,” Radio Free Europe/Radio Liberty reported.

During his speech, Mr. Zelenskyy also pleaded with the U.N. to do more to tackle the COVID-19 pandemic, including having richer countries share vaccines and for it to ramp up efforts to address the existential climate crisis.

Regarding such global challenges, which include tackling issues such as hunger and poverty, Mr. Zelenskyy said: “The world simply is throwing all those misfortunes into a big bag, and it’s now already ripping at the seams.”

Mr. Zelenskyy asked Mr. Stoltenberg “to facilitate the release of almost 450 Ukrainians detained in the temporarily uncontrolled territories and in Russia,” a presidential statement said.

Speaking to a gathering of Ukrainian Americans, Mr. Zelenskyy presented state awards and told attendees that “you are our best ambassadors … because you are defending our state, our sovereignty, territorial integrity abroad.”

The Ukrainian president’s statement, issued with his British counterpart, said Ukraine wants to move forward with a free-trade deal with the United Kingdom and it touched upon further ongoing British support to prop up Kyiv’s defense capabilities.

Britain is one of the few countries in the world to provide or sell Ukraine weapons and it has a military contingent that trains marines in the country’s southern Mykolayiv region.

In his speech to the U.N. assembly, Mr. Zelenskyy urged all member countries to join the Crimea Platform, including Russia.

Mr. Zelenskyy said that “we do not have any chosen ones here, untouchables here in this forum,” referring to Russia, and he urged member countries to help “rejuvenate” the U.N. The U.N. consists of 193 equal nations, he added, “and I invite all those nations to join the Declaration of the Crimea Platform to condemn the [Russian] occupation and to demonstrate that you are against changing borders by force in the world.”