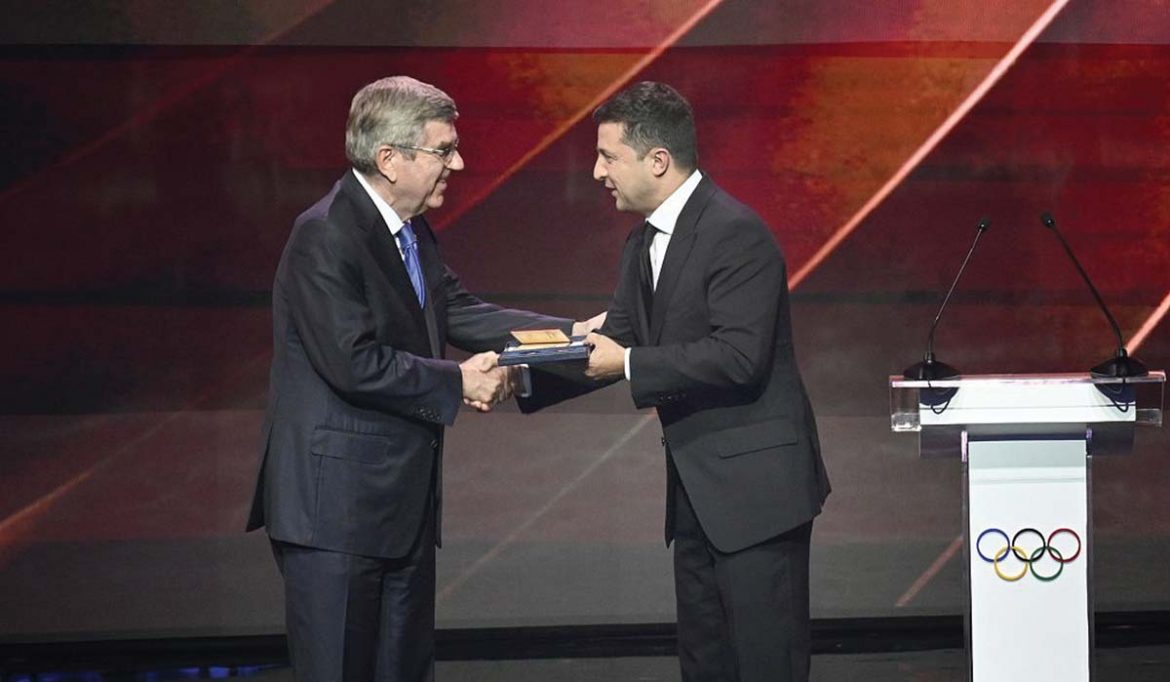 Office of the Ukrainian President

Speaking during a celebration that marked the 30th anniversary of the creation of the National Olympic Committee of Ukraine on September 11, Mr. Zelenskyy said  he believes there will come a day when the Olympic Games will be held in Ukraine.

The president added that winning the right to host the Olympic Games in Ukraine will not be an easy task.

“But in moments like this,” Mr. Zelenskyy said, “I always remember the words of my father, the master of sports in weightlifting. Weightlifters say that it is always not easy to go and try to lift something. It is easy not to try and walk away. Therefore, we will try on the Olympic Games.”

During the festive events in Kyiv’s National Palace of Arts, Mr. Zelenskyy said that his government is implementing special programs to create the necessary sports infrastructure to host the Winter Games, as well as the right conditions for training and preparation of Ukrainian athletes.

Vadym Huttsait, the head of Ukraine’s Ministry of Youth and Sports, said the government aims to bid for the 2030 Winter Olympics or the 2032 Youth Olympic Games.

“We are looking at the 2030 and 2032 Olympics,” Mr. Huttsait said. “We estimate where to host the games in Ukraine, how much it will cost. We look more at the Winter Olympics [2030]. We are also discussing the Youth Olympic Games [2032] or even the ambitious goal of hosting the Summer Olympics.”

Ukraine’s sports officials believe that “in 10 years we will have developed [the necessary infrastructure] in the country, and we will be able to hold the Olympic Games,” Mr. Huttsait said.

“We need to set ambitious goals. Holding the Olympics is a great goal for us. What are the Olympics? We will build infrastructure, and we will involve everyone. There will be vacancies so that people do not go abroad but work in Ukraine to build sports facilities. Tourists will come to us,” Mr. Huttsait added.

Mr. Zelenskyy had a chance to pitch the idea directly to Thomas Bach, the president of the International Olympic Committee (IOC), who also attended the celebration in Kyiv.

According to the Ukrainian president’s office, Mr. Zelenskyy told the IOC president that Ukraine is determined to host the Winter Olympic Games, and that he was preparing to send a delegation to the IOC headquarters in Lausanne, Switzerland, as soon as possible.

Mr. Bach said during the celebration in Kyiv that he welcomed a bid from Ukraine to host the Winter Games, “given the great sports tradition of Ukraine, and after having seen an awe-inspiring presentation of the most recent sports and sports infrastructure in the country.”

During the celebration, Mr. Zelenskyy congratulated Mr. Bach on the successful and safe completion of the Olympic Games in Tokyo. The two men both noted the outstanding performance of Ukraine’s athletes, and Mr. Zelenskyy thanked Mr. Bach for the continuing long-term support of Ukrainian sport. As a result, Mr. Zelenskyy awarded the IOC president the Order of Prince Yaroslav the Wise.

“Today, all of Ukraine is celebrating because it is difficult to find a corner of the country that could not bring up a champion, medalist or participant in the Olympic Games,” Mr. Bach said.

The process of selecting a host country for the Olympic Games is done by the IOC in two stages. The country, city or region which wants to host the games sends a delegation to the IOC headquarters, where it enters into a dialogue with the Commission for Determining the Future Host. Ukraine has said it will send a delegation to the IOC as soon as possible.

In the second stage, the same commission conducts a thorough audit of the different host bids to ensure they have the infrastructure and resources needed to host the Olympic Games. A winning bid is then selected during an ordinary IOC session by a majority of its delegates.

In July 2019, Mr. Zelenskyy said Ukraine should compete for the right to host the Olympic Games. A year later, in September 2020, Mr. Zelenskyy set a goal that Ukraine’s Ministry of Youth and Sports should bid for the Olympics in Ukraine.

The selection of the host of the 2030 Olympics is to take place either in February 2022 in Beijing or 2023 in Mumbai. The exact date are still unknown.

Earlier, in 2011, at the initiative of then-President Viktor Yanukovych, Ukraine submitted a bid for the 2022 Winter Olympics. Presumably, Lviv and the ski resort Bukovel would have hosted the games.

Mr. Zelenskyy said in his speech during Ukraine’s Olympic Committee anniversary that some Olympic champions who won medals and represented the Ukrainian national team were forced to leave their homeland due to the state’s negligent attitude towards athletes.

“I want to change this. I want Ukrainian athletes to always feel [the way they do] on the podium, not just for three minutes every four years. No one has the right to organize hate campaigns against them on social media.  I want them to feel respected,” Mr. Zelenskyy said, referring to Zhan Beleniuk, who faced a barrage of racial abuse in Ukraine even he become the country’s lone gold medal winner at the 2020 Summer Olympics.

“Therefore, we have started to renovate and build the sports infrastructure, first of all for children. This is very important because love for sports should be nurtured from childhood,” Mr. Zelenskyy said.

“We have started the Healthy Ukraine program. I am proud of this program. It provides the construction of 2,000 parks for activities in Ukraine, 10,000 sports grounds, 19 ice arenas throughout the country and 100 stadiums,” the president said.

In addition, the Healthy Ukraine program envisages the construction of multifunctional complexes in each region of Ukraine capable of hosting world-class competitions.

“We have made sport a strategic direction of the state,” he said.